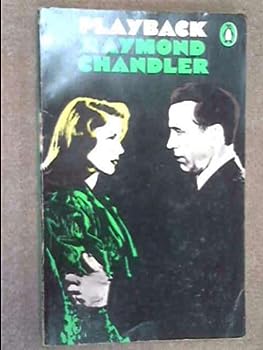 (Book #7 in the Philip Marlowe Series)

A Good Crime Novel Made Into A Graphic Novel!

Published by Thriftbooks.com User , 11 years ago
Playback was Raymond Chandler's last novel featuring the ever-popular Philip Marlowe. This graphic novel adaptation takes the same concept, throws out Marlowe and adds the appeal and allure of an old Black and White film noir. The story was great. It concerns a young woman who is exonerated of her husband's death. Fearing scrutiny from her husband's family, she goes to Vancouver. An inspector follows her and they fall in love. All might be well, but, just like any great film noir, the ending has a twist. This story is reminiscent of the days of the Golden age of Hollywood, with Bogart, Edward G. Robinson and Cagney. The artwork is stark black and white, without shades of gray. Overall it is quite impressive, but sometimes it can be hard to make out what is going on. Anyway, if you are a serious comic book collector or a crime novelist aficionado and desire something unique for your collection, pick this up. This is a fine pick for a personal collection with quality production values.

Depending on how you read it.

Published by Thriftbooks.com User , 17 years ago
Yes, Playback is the last of Chandler's novels. No, it is not the best of his novels-- not by a long shot. Yes, it is still worth the time that it takes to read. Playback is an afterword to a great series. As a book, it is a little bit sadder, a little bit more cynical. Marlowe (like Chandler himself?) is going through the motions and none of what used to interest him is quite as compelling. The character and writer both have seen a vision of how it all ends and fail to stay quite as focused on the plot. In the book, Marlowe agrees to enjoy the charms of the lovely Miss Vermilyea, but not unless she agrees to go somewhere besides his apartment. He had fallen in love with someone else in that room, and is not sure that her charms will live up to the comparison. He says: "I had a dream here once, a year and a half ago. There is still a shred of it left." As a reader, you may have the same feeling about this book. It is a lovely moment, but not to be compared to the real thing. But still, a lovely moment.

Playback is an engaging read.

Published by Thriftbooks.com User , 19 years ago
I have read all of Raymond Chandler's novels, and I believe Playback was his last. This story was first intended, I believe as a screenplay, and reading the story, you definitely sense a filmic quality. The novel and tone is quiet, almost as if Philip Marlowe is sleepwalking throughout the mystery. This is not neccessarily a bad thing. The plot has Marlowe shadowing a a wealthy young woman hiding out in a small Southern California beach town who is trying to escape her past. There are the usual sordid characters and sprinkling of murders, but Chandler also introduces a love affair or two.A lot of the reviews I've read here so far seem unimpressed with this story -- ignore them. PLAYBACK is classic Chandler, and one of his very best.

The Evolution of the Modern Tough Guy Detective is complete

Published by Thriftbooks.com User , 22 years ago
From Hammett to Chandler we see the beginning of the modern day tough guy detective. In this novel, Chandler's raging cynic, Phillip Marlowe, completes the cycle which began in early short stories and in "The Big Sleep." Chandler takes Marlowe through his normal routines, but also allows his detective to show more fallibility than normal. Marlowe finally stops shunning the seductresses he normally encounters and actually makes love in this novel. Chandler's decision to let Marlowe fornicate freely paved the way for future authors who followed the Hammett, Chandler rule book. This novel is both a perfect ending to the Marlowe series, and a marvelous requiem to an author so disillusioned by the post-war 40's and 50's. Chandler never shied away from showing his disdain for the spoiled and wealthy members of Southern California during his time, but in no other novel or story does he so boldy bare his cynicism. A true masterpiece from a brilliant writer. It is a shame his works are viewed only as Crime Fiction and not as literary treasures.

Published by Thriftbooks.com User , 23 years ago
Last novel of Chandler, and Philip Marlowe. On the surface is a classic detective story.But you may be faced with a couple of deep reflexions; about solitude and the individual. About existence.Surprisingly bitter. I find it close to Sartre's The Nausea. Perhaps also to T.S Eliot, The Wasteland.
Copyright © 2020 Thriftbooks.com Terms of Use | Privacy Policy | Do Not Sell My Personal Information | Accessibility Statement
ThriftBooks® and the ThriftBooks® logo are registered trademarks of Thrift Books Global, LLC