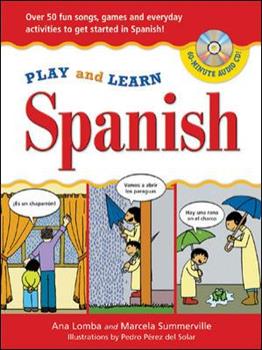 Published by Robert , 2 years ago
I was bummed that the cd was missing. I was looking forward to learning pronunciation with the song but no without the cd and the music is not contained in the book I do not know if I can get any use from it. I should have realized there was a good chance there would be no cd

Published by Thriftbooks.com User , 14 years ago
I already speak Spanish fluently, but if you don't and you want to teach your children how to speak Spanish well, this is a wonderful guide. I teach Spanish to preschoolers and use this book as the 'textbook' that goes home with every child (ages 3-6). There is a CD where the authors speak Spanish so that parents can practice & learn in order to teach. I also highly recommend their philosophy of Easy Immersion. I agree 100% with their approach - it is exactly how I teach my children and students Spanish - by speaking to them in Spanish in lots of different situations (play, meal time, bath time, etc.) There is only one way to learn a language, and that is to USE IT IN REAL LIFE SITUATIONS! A great resource.

Published by Thriftbooks.com User , 14 years ago
This book is the best book for helping one pick up the Spanish language. It beats everything, especially the boring textbooks I had in high school Spanish class. Thanks to a year abroad in Barcelona, Spain, I now speak Spanish fluently. Their method for picking up Spanish is perfect. They call it "easy immersion": "using simple language constructions to describe obvious situations: 'I'm drawing a circle,' you may say while actually drawing a circle" (p. 1). This is how we picked up our first language. There are over 50 pages of Spanish dialogues (with English translations) that model real-life sentences and phrases that parents and children actually exchange. This is real language, not some made up dialogue about a few characters you care nothing about. Their recommendation: "Start with the expressions or vocabulary words that you think will be most appealing to your child and then build by using the expressions in other situations as well" (p. 2). If you added a new phrase/sentence of 3-5 words a week to your repertoire, then in a year you will have picked up over 150 to 250 words. That's pretty good, especially when you consider that about 85% of everyday spoken Spanish is made up of around 1000 words! (That's a research bit from a book by Mark Davies, A Frequency Dictionary of Spanish). The CD included with the book has over a dozen great songs that kids will enjoy listening to, dancing to and singing with. Also on the CD is all of the Spanish dialogue from the 50+ pages. That is a great asset, because listening to Spanish is the best way to improve one's pronunciation of Spanish, not "listening and repeating." (If you want more info on the best way to learn--actually pick up--a language, read Stephen Krashen's works on second language acquisition.) Also, a word of caution about picking up a language: we naturally go through a "silent period" when we are first introduced to a language. Children typically don't begin speaking a few words in their native language until 9-12 months old. Your child will begin imitating what you've been saying in Spanish when s/he has internalized it fully and is ready to speak. The only way to speed up a child speaking sooner in Spanish is for her/him to hear more and more Spanish that they understand. If you only buy one book to help you and/or your child to pick up Spanish, buy THIS book! You will be so glad you did!

Play and Learn is the single best resource I have purchased

Published by Thriftbooks.com User , 15 years ago
This book and CD has changed the way I think about teaching the Spanish language at home. The language presentation allows you to enter the child's world in the Spanish language in a simple yet meaningful way. By using a natural context within themes that are important and real to the child, the language comes alive. This is not the traditional drill or list method of teaching (which I have found does not work with young children), but rather a way to allow children to acquire the language in a natural way. My son loves playing and living in Spanish. He is starting to really take off in his langauge production. This is not the type of book you can give or read to a child but rather a book that can become part of your daily routine, play, and life. You must be willing to act, play, and practice with your child, but the rewards are endless. My son now loves to speak Spanish and has gained a confidence that he never had with the language. He especially loves the "Apurate" fire truck song and will often be heard singing "la luna la luna salio' de paseo. . ." Ana and Marcela's material is based on sound and accurate research yet is fun, interactive, and accessible to parents. I strongly recommend their products to anyone who really wants to engage their child in the Spanish language. Senora O (Spanish teacher)

It's one of our favorites!

Published by Thriftbooks.com User , 15 years ago
This is a TERRIFIC cd! It covers 28 scenarios: Good morning Ready for the day Let's Go Outside Let's Cook Lunchtime Dinnertime In the Kitchen Bath Time Good Night Playtime Let's Be Firemen Let's Imagine (pirates, princesses) In the Car Playing Sports Going Places Let's Go to the Park Let's go to Fun Places Let's go to the Museum Visiting Family Animals I Don't Feel Well Happy Birthday Let's Go to the Beach In the Spring In the Summer In the Fall In the Winter In each scenario there's a dialogue between a mother and child using everyday vocabulary. For instance in the dialogue about getting dressed (Ready for the Day): Time to get dressed! Let's look in the closet. Let's see - pants, skirts, shirts, t-shirts... What do you want to put on? Do you want the red skirt? ... Very good. Put in your arm. Put in your other arm. Put in your head. All done! ... Wow, how nice you look! There are about 20+ songs interspersed between the dialogues. There's a really cute one about putting things away that we use often. ;) Also, there are cultural notes, little cartoons, suggestions for teaching your child Spanish and main vocabulary words with illustrations. (English translations only in the book, but not on the cd which I like - except for a brief intro.) What I really like is that instead of just going over words on their own, with this book, one can learn to put them to use - really using the language. I'm currently teaching my sons (3,6) Spanish and this is by far one of their favorite cds. I'm looking forward to more Spanish-language materials from Sra. Lomba.

"Perfecto" for teachers and parents ... ¡bravo!

Published by Thriftbooks.com User , 16 years ago
Well, not only is this a GREAT teaching resource, but Ana's website is also a wealth of information and links for the parent and/or teacher looking for resources to teach preschoolers (and young children) Spanish as a second language. A little over a year ago I started my own program teaching Spanish to young children and this is a main resource I use to plan thematic curriculum. For parents who are concerned about their Spanish skills, the included CD makes it an even better bargain! Gracias por todo! Ana is now focusing on publishing 2nd language materials and resources for children. I can't wait to see what she comes out with next.
Copyright © 2020 Thriftbooks.com Terms of Use | Privacy Policy | Do Not Sell My Personal Information | Accessibility Statement
ThriftBooks® and the ThriftBooks® logo are registered trademarks of Thrift Books Global, LLC