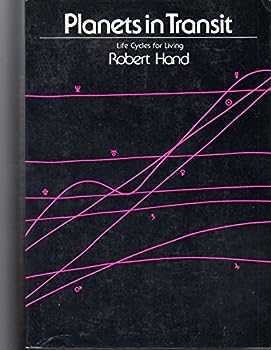 We receive 25 copies every 6 months.

This book covers complete delineations of all the major transits - conjunction, sextile, square, trine and opposition - that occur between transiting Sun, Moon and all planets to each planet in the... This description may be from another edition of this product.

Published by Thriftbooks.com User , 19 years ago
Over 20 years old, this book still remains one of the modern classics that no contemporary astrologer can afford to be without. Just about every serious astrologer I've ever met has got a copy of this on his or her shelf. For most of the book, Robert Hand explores the meaning of every possible combination of planets in transit to each other, this being one of the most commonly used techniques of astrological prediction. In addition to the planets, the ascendant and midheaven are also included but astrologers using Chiron will have to look elsewhere. The introductory chapters about the interpretation and timing of transits are well worth a read, and these are followed by a case study of Nixon and the Watergate scandals in the early 1970s. Then its on to a chapter for each planet and the transits it makes to all the others. Hand's interpretations are full of psychological insights, but the nature of specific events that may occur are also covered. For the first few years I had this book I tended to focus on the more obvious long-term transits of the outer planets (Jupiter, Saturn, Uranus, Neptune, Pluto) but eventually I became just as intrigued by the uncanny accuracy of the "insignificant" daily or even hourly transits of the Sun, the Moon and Mercury. The smallest and the largest life cycles have their part to play. Buy this book and prove or disprove predictive astrology for yourself!

The Definitive Book on Planetary Transits

Published by Thriftbooks.com User , 20 years ago
Most astrologers regard "Planets In Transit" as the definitive book on transiting planets. In Hand's own words, "a transit occurs whenever a planet, moving in its orbit during your lifetime, forms an aspect to a planet, the Sun, Moon or any of the house cusps in your natal horoscope" (p. 3). In this book, Hand reveals what "you are most likely to experience, emotionally psychologically, and circumstantially, under each transit" (p. 3). Since modern astrology is geared toward self-empowerment and most astrologers shun fatalistic interpretations, this book provides you with the basis upon which you can choose suitable directions to harness the energies of planetary transits. Consequently, a great benefit of understanding transits is that you can expect and plan accordingly for them, since they function within time. Armed with that awareness, your potential for success in handling both easy and challenging transits is quite good.As with all of Hand's books, this text is easy to read and informative. Hand's writing style is positive and insightful, and the cookbook format makes a nice handy reference guide for both beginners and professionals. If you are new to astrology, then this text is great to own. Originally published in 1976, this book has been a standard classic in most astrologers' library and is as insightful today as when it was first written.

a shining spark on hazy horizon

Published by Thriftbooks.com User , 20 years ago
The book brought by Robert Hand is a "magnum opus".In this book I find not even a single word of waste or repeating the same again and again.Hither to Astrology was mainly dealing with results of aspects from Radical planetary positions to yearly progressions.Almost in all, writers did not attach much importance to transitions. The book deals all transitions of planets from Sun to Pluto.And the aspects of transitions to Ascendent and Mid-heaven also.It is a very useful book to be kept on the table of a beginner aswell with a professional.I appreaciate the language, manner in presenting the matter and the authoritative command on the subject. The book contains all the subject without wasting the pages with endless sample horoscopes. The book is a BRISTLING STAR in this subject and stays shining for ever in the Galaxy of Astrology Books.(I am 60 yrs. old and having an experience of 40 yrs.)

Explains the daily astrological influences in your life

Published by Thriftbooks.com User , 23 years ago
With all the nonsense written about astrology it's good to have a reliable book to explain the daily influences in your horoscope. Put down the newspaper. Put down the book that claims to tell you about your day based simply on your Sun sign. Those things are completely worthless. I was once fired on my supposed lucky day in one of those magazines. The newspaper and magazine daily horoscopes have given astrology a bad name.Planets In Transit by Robert Hand is the real thing, the kind of book Sir Isaac Newton would have approved when he defended his belief in astrology to Halley (of Halley's comet fame) by saying - I have looked into the subject, Mr Halley, and you haven't.This book is not for novices. You have to know the fundamentals of astrology to use it. You have to know what transiting Mars trine natal Venus means in astronomical terms before Robert Hand can explain it to you in astrological terms. You also need your chart and an ephemeris. If you don't have these things and don't know what I'm talking about, pick up a basic primer in astrology before graduating to Planets In Transit. I recommended the book to my astrology students when I taught an adult education course.

If you only buy one transit book, this is the one

Published by Thriftbooks.com User , 23 years ago
I bought this book years ago in hardcover. I'm happy to say that I had the foresight to cover it with plastic since I refer to this book more than any other astrology book that I own and now, more than 20 years later, my copy is still in good condition. I have an entire shelf filled with astrology books, probably in the area 400+ books. I've been an astrologer for over 30 years and my highest recommendation goes to Planets in Transits. In 1980 I had the opportunity to hear Robert Hand at an astrology conference. He talked about how he wrote Planets in Transit and he said that at the time of the writing, he had a transit of Neptune going over his Sun. He jokingly said, "I don't even remember writing this book." Surely, with Neptune transiting over his Sun, he was blessedly inspired. For all new and intermediate students, this is the one to have on your shelf.
Trustpilot
Copyright © 2022 Thriftbooks.com Terms of Use | Privacy Policy | Do Not Sell My Personal Information | Cookie Preferences | Accessibility Statement
ThriftBooks® and the ThriftBooks® logo are registered trademarks of Thrift Books Global, LLC