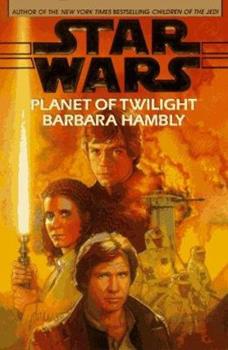 TheStar Wars(r) saga continues in hardcover.??Renat Chorios is a backwater land that serves as a sanctuary for a peaceful religious cult.??But peace is threatened with the rise of a sinister warlord who takes Princess Leia hostage by tricking her into attending a diplomatic meeting.??Meanwhile Luke continues his search for his lost love, and finds that the force has some uncontrollable and deadly powers in this strange land.??At the center of the...

Published by Thriftbooks.com User , 23 years ago
The Planet of Twilight is a danm good book, if you like your books heavy and hard to read. But still, this is a vary good book. I love when there are'nt a happy ending !

Published by Thriftbooks.com User , 23 years ago
This is a great book. Hambly is an exelent auther and does the characters exteremly well. Her books are not all action. There is acually a story line with them un-like some Star Wars. She knows how to weave a perfect story. The Death Seed plauge was a great idea. In most books you can tell exactly what is going to happen and when but her books are unpredictable. Planet of Twilight was great!

An ecellent sequel to Children of the Jedi and Dark Saber.

Published by Thriftbooks.com User , 24 years ago
I like all of te Star Wars books but I paticulary like thisgroup. It gives us more of an insight to Luke and his Personalitybeyond the Jedi Master.

Published by Thriftbooks.com User , 24 years ago
This story costars a force sensitive Hutt named Beldorian and Admiral Daala. I enjoyed hearing it

Another great book in the Star Wars series.

Published by Thriftbooks.com User , 24 years ago
I just finished Planet of Twilight and it is truly another great book in the series. This book seems to wrap up Luke's relationship with Callista, but fear not, it doesn't wind up with her dieing. This leaves the character for possible future appearances. There are a few surprises in this one particularly the long lost love of Leigus. Barbara is more readable in this book than her last Star Wars book. Barbara has a tendency to start a character speaking, drift around describing scenery or events for a long time, then back to the conversation. It makes the conversation difficult to follow. There is less of that in this book and that's refreshing. I won't give away any plot points, all I will say is this is a must read for any Star Wars fan. If you haven't been reading the rest of the series I would reccomend reading the Thrawn Trilogy and Children of the Jedi first. I thought the planet of Nam Chorios was indeed an interesting one. While the threat to the galaxy may be considered unoriginal, it was done very well and is an intricate part of the story. Hats of to Barbara for this April fix for addicts of the Star Wars universe.
Copyright © 2020 Thriftbooks.com Terms of Use | Privacy Policy | Do Not Sell My Personal Information | Accessibility Statement
ThriftBooks® and the ThriftBooks® logo are registered trademarks of Thrift Books Global, LLC