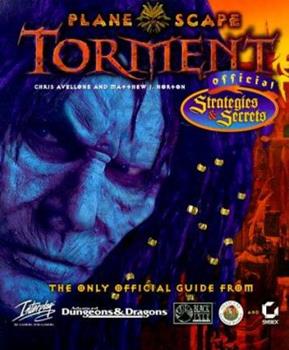 by Chris Avellone and Colin McComb

Players of the newest role-playing game from the publishers of Baldur's Gate and Fallout 2 can use this official guide to walk through every level of the game, see highly detailed maps, and learn in-depth strategies and statistics for all items, weapons, spells, and armor. Co-written by the game's lead designer and one of the lead designers for Fallout 2.

Useful visitor's guide to Sigil, the Outlands, & the Planes

Published by Thriftbooks.com User , 16 years ago
The obvious question for a book like this is, why should a reader listen to these people? In this case: - Avellone was Lead Designer on PLANESCAPE: TORMENT in its incarnation as a computer game; - Norton wrote the manual; - McComb, another of the game's designers, followed TORMENT over to Interplay from TSR, having worked on the Planescape campaign setting there. The book's chapters are grouped into two parts, where PART 1: A WORLD OF TORMENT provides an overview and PART 2: FOLLOW THE GREAT ROAD is a detailed walkthrough. PART 2, of course, provides the most spoilers for the game, but certain sections of PART 1 also contain spoilers. While anyone consulting a strategy guide should've waived the right to complain too much about spoilers, it is possible (with some care about not reading too far ahead) to consult specific sections for specific problems. Part 1 contains 5 chapters of the book's 16. Chapter 1 ("Genesis") discusses character generation in detail, explains the general principles of fighting, and provides an overview of alignments and factions. (It also compares/contrasts TORMENT with BALDUR'S GATE: similar interfaces but some specialization for TORMENT.) Chapters 2 - 4 cover creatures, gear, and spells/special abilities, while 5 is devoted entirely to tattoos. Chapter 5 is the most spoiler-heavy of part 1's chapters, thanks to the detailed discussion of Event Tattoos (available only after achieving certain actions in the game). I'm aware that this book has attracted some criticism regarding the accuracy of the numbers in part 1's tables. For example, every kind of critter in the game has a description in the ALL CREATURES GREAT AND SMALL section, accompanied by a table describing such matters as its Armor Class, Hit Points, etc. Likewise, GEAR covers all the objects in the game (including weapons), and SPELLS AND SPECIAL ABILITIES provides analogous information. Given the sheer volume of information, it's likely that the tables aren't perfect. Personally, I can't speak to the accuracy of the tables' numbers. What I can say is that using the tables as the sole criterion for judging the value of this book dismisses a great deal of other valuable information herein. I'm thinking primarily of two types of information that don't depend on numbers: - general information about effectiveness of various kinds of attacks on specific types of monsters, and - specifics about how to get at quests, game areas, special abilities, etc. that a player may overlook if he or she doesn't think to experiment in the right way. The first case covers such matters as the need to invest in enchanted weapons when fighting abishai, preferred types of weapons in dealing with the undead, and so on. That kind of information can help improve one's gameplay generally and help bail the player out of annoying "I keep dying there" situations. The latter case, though, means that this book can help the player find the game itself more interesting. For example, if a pl

Published by Thriftbooks.com User , 21 years ago
Overall, this guide provided most information one would need to complete the game. Most of the provided walkthroughs were very detailed, and maps with labeled locations of important areas were also provided. However, a few details on quests in the game were not provided, such as locations of items/events and such. One such detail left out was a vital location in the game required to finish an important quest. These small errors are the only reason why I could not give this guide 5 stars.
Copyright © 2020 Thriftbooks.com Terms of Use | Privacy Policy | Do Not Sell My Personal Information | Accessibility Statement
ThriftBooks® and the ThriftBooks® logo are registered trademarks of Thrift Books Global, LLC