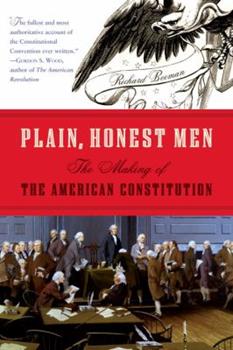 Plain, Honest Men: The Making of the American Constitution

In May 1787, in an atmosphere of crisis, delegates met in Philadelphia to design a radically new form of government. Distinguished historian Richard Beeman captures as never before the dynamic of the debate and the characters of the men who labored that historic summer. Virtually all of the issues in dispute--the extent of presidential power, the nature of federalism, and, most explosive of all, the role of slavery--have continued to provoke conflict...

Published by Thriftbooks.com User , 12 years ago
Beeman is a highly respected scholar and expert on the Constitution, the Convention during which it was drafted, and the intellectual foundations of the document. This popular, but also scholarly, treatment of the Constitutional Convention is thorough, balanced, and should be on the reading list of anyone who wants to really understand what went on during the three-month-long convention in Philadelphia. The proceedings of the Convention were not well documented (James Madison's amazing journal is the only comprehensive account; there is no other comparable source [least of all the official secretary's sketchy notes], and in many cases there are not corroborating reports that would enable verification of accounts. Hence, "what went on" is often open to interpretation, both as to the intent of the speaker/interest group and as to the precise content. Given those persistent challenges, Beeman is scrupulously fair in fully describing both what is known, and in most instances to convey the factors that qualify or prevent firm conclusions as to meaning or intent. More than this, no historian should be expected to investigate and convey. Others have given this book three stars, and have claimed that they find in it bias and apologies for "judicial activism." I find nothing of the sort, and such qualified approval simply reveals a tendency to seek "political correctness" (as defined by the reviewer) in the text. Beeman's treatment is first-rate, reliable, even-handed, and will help readers to understand that ALL points of view were vigorously and fully shared during the convention. Any other characterization of this book is, in my opinion, based not on fact but on uninformed opinion. I fully enjoyed this book as part of my reading program on the Constitution, and recommend it without reservation to the thoughtful inquirer.

Published by Thriftbooks.com User , 13 years ago
An excellent history of the drafting of what was to become our nation's bedrock legal document. Professor Beeman brings a lifetime of learning into his solid and polished account of the high and low statecraft that occupied those early leaders in Philadelphia during the long summer of 1787. If you want to know why we have an electoral college; why Delaware has as many senators as California; why it is no surprise that the Civil War started in South Carolina; why the Constitution bans export taxes; why George Washington really was the indispensable man; why the Bill of Rights came afterwards; why ..., why ..., why ...--Buy and read this book. It will win prizes.

Published by Thriftbooks.com User , 13 years ago
If there are two things I would recommend reading this summer they are, in order, Plain, Honest Men: The Making of the American Constitution and then The Constitution of the United States. We take the Constitution for granted probably more than any other document that I know of. In Plain, Honest Men, Richard Beeman gives the reader a glimpse of the process that produced one of the most beloved documents in the world. If beloved, it is equally misunderstood, misquoted, and misused. While Beeman's book won't prevent the various ills associated with the Constitution, and it won't make Constitutional scholars of us, it will provide an eye opening account of its creation and the personalities of the men who created it. I found Plain, Honest Men to be one of the best books I've read in the last couple of years. Yes, in places it is a page turner. I also now understand some of the debates over issues like ownership of guns. As much as I am grateful for the existence of the Constitution, it is not a perfect document. Witness the current debates over the issue of gun control, or the separation of church and state. Can you have too much freedom of speech? All of these questions are debated now because of the contents of the Constitution we have. If those issues are confusing to us, the shocker is that they were confusing to the writers of the Constitution. There was very little agreement then on any of the issues. The Constitution we have is a creation of compromise. Understanding what Beeman conveys won't make these issues any clearer, but it will clarify the monumental event that the Constitution's creation was and is. Beeman also provides unique glimpses into the personalities like Robert Morris, George Washington, and James Madison and how they each helped to shape the document we have. Americans should read Plain, Honest Men: The Making of the American Constitution. When you're finished, read the real document. Peace to all.

This book is fantastic!

Published by Thriftbooks.com User , 13 years ago
Beeman makes a pivotal moment in history come alive for the average reader with detailed character sketches of each of the delegates. You're learning something, but you never feel like you're reading a textbook... I think his treatment of James Madison is destined to be the final word. The bonus for me was discovering how relevant most of the book is to evaluating the political climate we find ourselves in today.

Published by Thriftbooks.com User , 13 years ago
This book reminds me of "The Founding Brothers" and "The Radicalism of the American Revolution" -- great writing for laymen by a talented professional historian. A key idea is that a small group of delegates, led by Washington, Madison, Morris, and Wilson, planned in advance to launch a revolutionary form of government. But who knew that Madison, clever enough to redirect the delegates who planned to simply amend the Articles of Confederation, was short and sickly, with a tendency to mumble? (A disappointment to me, a fellow Princeton alum.) Try this book... I'm sure you'll like it.
Trustpilot
Copyright © 2022 Thriftbooks.com Terms of Use | Privacy Policy | Do Not Sell or Share My Personal Information | Accessibility Statement
ThriftBooks® and the ThriftBooks® logo are registered trademarks of Thrift Books Global, LLC