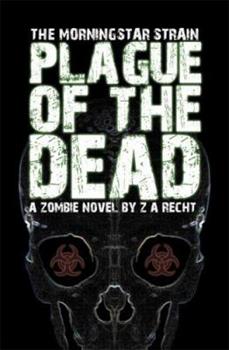 Plague of the Dead (The Morningstar Strain)

(Book #1 in the Morningstar Strain Series)

The "zombie apocalypse," once on the fringes of horror, has become one of the most buzzworthy genres in popular culture. Now, in Plague of the Dead, Z.A. Recht delivers an intelligent, gripping... This description may be from another edition of this product.

Published by Thriftbooks.com User , 14 years ago
The MorningStar Virus - a not-So-Friendly strain that has been likened to the next "Eboli" has spread across Africa like an epidemic and shows no signs of slowing. First there were the random reports, then the confirmations of the attacks, and then the footage of people trying to make it to floating salvation only to find themselves eaten alive by "packs" of ravenous carriers on national TV. Making it worse is the hushed tones of the government and their attitude toward the virus, thinking it will never make off a continent placed on lockdown. Seemingly containable at first, the MorningStar Virus nonetheless has a fast incubation rate, rendering its victims raging beasts that seem to press on with insatiable appetites, and it doesn't seem to understand the extent of juristic ional boundaries. Even worse, when a carrier dies they don't stay dead for long. I have to admit that I've been reluctant to by zombie books as of late. Often they follow a predictable format and, worse still, they end up with predictable endings. Still, in this market flooded with books on the dead coming back to life, Z.A. Recht has more than taken the subject and run with it by adding a little something extra. Ladies and gentlemen, I give you p-l-o-t. Yes, by adding in realistic elements and fundamental questions about the problem, Recht went passed the problems of older books and instilled a genuine feeling of panic in the characters abounding in the book. The writing in the book is done with a great deal of talent, too, and the pace of the book is fantastic and allows the reader to keep a brisk pace while tracking the virus and the efforts to contain it. By drawing the battlelines this book really does hit on the elements you need to make a complete novel about the undying - it touches on the human element, it mingles some ideology into the fray, and it adds in the ghastly for effect. This gives the book something that newer successes have had; zombie stories with actual teeth. If you are a fan of zombie books or are a person that is trying to find a new way to look at the zombie question, this book is a good place to play. It has all the elements you need for a great tale, it showcases the overconfidence that humanity has, and it has some of the most adorable flesh-eating cast of characters you'd ever want wrapping their gums around you. I highly recommend the book, thinking it is a step in the right direction.

One heck of a good zombie novel

Published by Thriftbooks.com User , 15 years ago
If the Z in Z.A. Recht doesn't stand for Zombie, it ought to because the man has given the world a great zombie novel in Plague of the Dead (actually, I think the Z stands for Zach, but maybe he can go about getting that changed). Usually, when I start reviewing a zombie novel or movie, I start by pointing out that this horror fan has never been a huge fan of zombies, but I'm not going to do that this time around. Thanks to the one-two punch of David Wellington and now Z.A. Recht, I now consider myself a true fan of the zombie genre. Today's new crop of post-apocalyptic horror writers have created something far more interesting than a braindead, animated corpse wandering the countryside looking for revenge on behalf of some voodoo queen. Out of the remote regions of Africa it arose, a virus that made Ebola look like a case of the sniffles. The Morningstar Strain, as it was dubbed, doesn't just kill you (and thus itself); it reanimates your sorry ass and sends you out looking for sustenance in the form of human flesh. Yep, you can't blame any black ops government operation for the epidemic that threatens to exterminate human life on this planet this time around. This virus is completely natural - and beyond deadly. Lt. Colonel Anna Demilio of the US Army Medical Research Institute of Infectious Disease (USAMRIID) actually goes out of her way to warn the powers that be of the threat early on, but the bureaucracy as well as international opposition doesn't even allow for any travel restrictions to be put in place until it's far too late. By the time U.S. leaders realize the extent of the threat, carriers escaping the troubled regions have transported the virus to various places all over the world. America sends in troops to try and cut Africa off from the Middle East and all regions beyond, while the leaders back home rely on wishful thinking alone to keep America's shores safe of the threat. An official policy of denial actually hamstrings Demilio in whatever futile efforts she might have made in terms of working toward a vaccine - and lands herself and a brave, plucky reporter named Julie Ortiz some quality time in one of the NSA's least hospitable accommodations. The country and entire world is going to hell, but the government is consumed with punishing those who release the already obvious truth as traitors to their country. Military attempts to cut the virus off on the African continent come to a head at the Suez Canal, but the forces under the command of Major General Francis Sherman are overtaken in the end by an endless horde of zombies. The veritable army of the undead comes in two flavors. While the shamblers are slowed down by the effects of rigor mortis and various decay, runners (those who succumbed to the virus before death) will freakin' run you down and can only be stopped by a shot to the head (or a skull-bashing whammy, but you really don't won't to be close enough to one of them to have to resort to hand-to-hand

Published by Thriftbooks.com User , 15 years ago
The End of the World has begun. It is called Morning Star. A virus of unknown origin and is unlike anything the world has ever seen. Those who are infected are subject to favor, chills, and very violent behavior. As the virus further takes hold those who are infected become incoherent and insanely violent. Their only will in life is to destroy any human that isn't a carrier of the virus. Those who are infected will eventually die but the virus isn't done. It reanimates the carrier who then rises and walks the earth seeking warm human flesh. Destruction of the Brain is the only way to bring the carrier down for good. Anna DeMilio of the US Army Medical Research Institute of Infectious Diseases has studied the virus. She knows it has the power to destroy mankind, and she is trying to warn the world. She knows that if it isn't quarantined to Africa the whole world will soon be overrun. Her warnings aren't heeded in time, and after a military operation in North Africa fails to contain the virus soon the entire world finds itself in the middle of a massive pandemic that cant be stopped. All the major nations of the world start falling into chaos. The carriers are roaming the streets of all the major cities, and there is nothing that can be done to stop it. Anna with the help of a reporter and a rogue NSA agent escapes a burning Washington DC in hopes of meeting up with a rag tag military unit. She hopes to find a safe place to continue her research. She is on a mission to find a cure before all is lost. America is in chaos now and they all know that the journey ahead will be pure Hell. I have said it time and time before, but I will say it one more time. I am a sucker for a good zombie story. I have also come to expect nothing but the best from Permuted Press releases. They publish the best Zombie Fiction, so when I got my copy of Plague of the Dead I was expecting nothing but the best, and Surprise Surprise I was blown away once again. Plague take off early and the action doesn't stop till the last page. I started and finished it in two days. It has some of the best action scenes you will find in a Zombie Story. The Suez Canal fight scene had me literally on the edge of my seat. I didn't want it to end. Mr. Recht has written one hell of a story and I was pleasantly surprised when I found out that Plague is only the first installment of this story. He is going to make a trilogy out of this story and I cant wait for the next installment. I am salivating for it now. I Highly recommend Plague of the Dead to all Zombie Fiction Lovers. Plague is 28 Days Later meets Dawn of the Dead. It has something for everyone. Go grab yourself a copy and I can promise you that you wont be sorry.

Published by Thriftbooks.com User , 15 years ago
I have been waiting for this book for a while now, and was overjoyed to receive it for X-mas. Recht is responsible for a new, doubly-terifying wrinkle in zombie fiction. I've often heard it debated whether the new fast zombies or the classic shambling ones are scarier. Morningstar gives us both! The first stage of infection has the morningstar virus acting like ebola or other fluid-borne bugs, and can be transmitted through various fluid exchanges (ew). The second stage fills the infected with rage and a ravenous apetite for violence, not to mention a veloceraptoresque pack hunting skill. If they die in this stage by any means other than destruction of the Cental Nervous System, they reanimate as classic undead zombies in the virus' thrid stage, at which point they can only be killed by destruction of the CNS. You see what I mean? Nasty things! Not only has Recht created what could be the most awful zombies yet, he provides us with engaging characters with largely realistic interactions (few characters are "flat" or anonymous without purpose). Another thing that makes this book ineresting is that it, like Brooks' World War Z, is set on a global stage, spanning an ocean and two continents. Go for it. If you like well-executed zombie stories, you'll devour this book.

Published by Thriftbooks.com User , 15 years ago
I previewed some of the material of this book online, and couldn't wait for it to come out in book form. Thanks God I wasn't dissapointed. The combination of medical thriller with the zombie word is a winning formula in the hands of Z.A. Recht. Great charaters, fast moving story, great book even if not a zombie fiction fan. For those of us who are, this book is some of the best work in this area. Z.A. Recht and J.L. Bourne (Day by Day Armageddon) are two new writers who's careers I'll be following in the future.
Trustpilot
Copyright © 2022 Thriftbooks.com Terms of Use | Privacy Policy | Do Not Sell My Personal Information | Accessibility Statement
ThriftBooks® and the ThriftBooks® logo are registered trademarks of Thrift Books Global, LLC