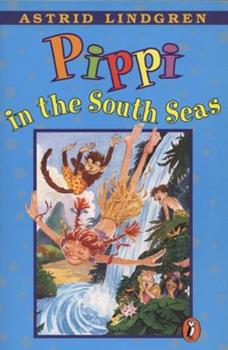 Pippi in the South Seas

(Book #3 in the Pippi Långstrump Series)

When Pippi's father, the king, sends for her, she decides to take her best friends Tommy and Annika with her to Kurrekurredutt Island. The island is fantastic and Pippi has one crazy adventure after another Pippi is even made a princess---Princess Pippilotta. But will Pippi and her friends really want to live on the island forever, never to return to Villa Villekulla? Any reappearance of the irrepressible Pippi Longstocking is cause for celebration...

Pippi in the South Seas

Published by Thriftbooks.com User , 16 years ago
I give this book 5 stars because it is interesting, funny, and silly. My favorite character was Pippi because she is silly and crazy. My favorite part was when Pippi and her friends were playing marbles in a cave. They were using pearls as their marbles. Two thieves came and tried to steal the pearls from the cave. Pippi thought they wanted to use them for marbles too so she told them to go to a store to get real marbles! I would recommend this book to anyone who likes being silly.

Pippi deals with adults by speaking double-talk and changing the subject, the fantasy of children ev

Published by Thriftbooks.com User , 16 years ago
Pippi Longstocking is one of the most delightful characters to ever appear in children's books. She is a small girl with pigtails who is the only human living in her house. Her father is the king of the Pacific island of Kurrekurredutt and she lives with her animals. She has pigtails, freckles and is incredibly strong. Tommy and Annika are her friends whose parents let her play with Pippi all the time. Some people may consider the Pippi books to be inappropriate for children, since Pippi does not go to school and lives a carefree life of perpetual childhood. I don't agree with this opinion, the book is fantasy and Pippi is so full of non sequiters when she speaks that the book is clearly not to be taken seriously. In this story, Pippi's father arrives to take Pippi to visit his kingdom of Kurrekurredutt. Tommy and Annika go with her and they have many great adventures. Pearls are plentiful in the waters around the island and the children have no trouble finding enough to play games of marbles. Two evil men land on the island and try to steal the pearls away. Pippi simply throws the men out onto the rocks and then into the sea, where they swim to their boat and are never heard from again. The book is loaded with metaphors for the relationship between children and adults. Pippi simply deals with each situation with an adult by performing double-talk or changing the subject. This naturally annoys the adults, but is a natural turnaround for children. The reasons adults give to children when explaining what is happening often appears as double-talk, so this is just a reversal of roles. I enjoyed this book immensely, reading it as a fantasy where a child remains a child, and talks strangely to adults. To children, that is often what adults seem to be doing to them.

A delightful book for anyone young at heart!

Published by Thriftbooks.com User , 19 years ago
This was one of my favorite books growing up, and I just reread it before sending a copy to a friend's daughter for Christmas. Pippi's irrepressible spirit and good-hearted hijinks will delight readers young and old, and remind you that you're only as old as you feel -- so feel young, arrange a question-and-answer bee and sail off to Kurrekurredutt Island in the South Seas with Pippi Longstocking! (The inhabitants of Kurrekurredutt Island are referred to as "Kurrekurredutts" in the original 1959 edition of the book, not as "cannibals" as one reviewer mentioned. And the only reference to skin color describes how Pippi and her friends tan in the South Seas sun, making no differences at all between them and their Kurrekurredutt playmates.) A delightful book to read again and again!

The Best of Pippi!

Published by Thriftbooks.com User , 22 years ago
This is my favorite Pippi Longstocking book because it takes Pippi from her home at Villa Villekulla into the exciting world of beaches, huts, cannibals, robbers, and pearls of the South Pacific! Over the years, some have complained that Mrs. Lindgren wrote the "cannibals" as being black, but believe me, she meant nothing by it. Her use of the word cannibal is only in a funny and exciting sense, not that they actually eat people. I can assure you that you won't find any part of the book offensive.

Published by Thriftbooks.com User , 23 years ago
Pippi In the South Seas continues the funny adventures of Pippi Longstocking. Most of the action in this fun filled sequel takes place on the island Kurrekurredutt. One day Pippi found a note in a bottle which said not to worry that her father will return on his ship the Hoptoad to bring her back to the island. This was sad for Pippi's friends Tommy and Annika, so they went along. When they all got to the island, Pippi was made Cannibal Princess. The exciting things that happen to them on the island make it hard for them to leave, but they return home to a late Christmas celebration.
Trustpilot
Copyright © 2022 Thriftbooks.com Terms of Use | Privacy Policy | Do Not Sell or Share My Personal Information | Accessibility Statement
ThriftBooks® and the ThriftBooks® logo are registered trademarks of Thrift Books Global, LLC