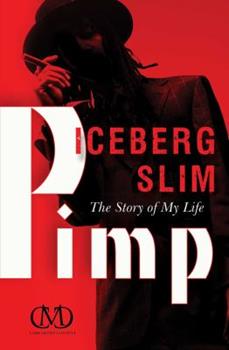 "[In Pimp], Iceberg Slim breaks down some of the coldest, capitalist concepts I've ever heard in my life." --Dave Chappelle, from his Netflix special The Bird Revelation An immersive experience unlike anything before it, Pimp is the classic hustler's tale that never seems to go out of style. Iceberg Slim's autobiographical novel sent shockwaves throughout the literary world when it published in 1969. Groundbreaking for its authentic and oft-brutal...

Published by Thriftbooks.com User , 15 years ago
"Pimp" is a dark, ugly book. It's author Robert Beck, aka Iceberg Slim spent much of his life as a pimp. It's written to leave a bad taste in your mouth. That is the intent of the author. This is a chronicle of how he wasted twenty-five years of his life. Maya Angelou's brother told her a pimp is one of two kinds of men. Either he hates women or he fears women. The process of encouraging, enforcing a woman to sell her body is neither sexy or romantic. The life of a hooker, especially one working the streets is harsh and degrading. A `good' pimp only cares about using his women until they have no more left to give. Only someone who hates or feels the need to control women would make a `good' pimp. Iceberg Slim hated women. His father deserted them while he was a baby. Bobby and his mother lead a hand-to-mouth existence for his early years. Early on he is sexually abused by his babysitter. Stability came into his life when his mother marries an older man who was a successful businessman. Young Bobby loved his stepfather. They lead a comfortable upper middle-class existence until his mother runs off with another man. The image of his stepfather crying in the street begging his mother to stay is repeated throughout the book. He took his hatred of his mother out on women - as a pimp. Of course things go down hill for his mother. Eventually she gets her act together. But even though stability is restored in his life, Robert wants to be a pimp. Possessing a superior I.Q. (175), he was a straight-A student. In a time of blatant racial discrimination (the 1920s, 30s, 40s) he is given a college scholarship. But his path is set, the seeds of hatred planted years before take root and flourish. For more details about his descent into depravity and his redemption - read the book. His writing style is not polished. His language is not refined. But his imagery is stunning. He induces mood and feeling brilliantly. Mood and feeling are enhanced by his lack of polish. The reader may have trouble with his slang. It's been out of style for 80 years. For example, "vines" means clothes. A woman "georgias" a man when she uses him for sexual gratification without paying. A "square" is a cigarette, etc. I have noticed a disturbing trend. The black pimp is a role-model for some segments of society. Performers such as Ice-T extol the pimp lifestyle. Iceberg Slim is 'the man'. Whenever this book is discussed as a movie project, the gangsta rappers start lobbying for the part. These guys want to be like him. But not the man he became but the man he was - a depraved parasite. Some of them talk about this book as though it's the Bible. While this is an excellent book, it is ugly. Richard Beck wanted it that way. He wanted to send a message against pimping and it's lifestyle. Sometimes I wonder if these pimp wannbes can read.

Published by Thriftbooks.com User , 18 years ago
Too often these days we hear all these people goin around callin themselves pimps, and hoes and say they pimpin it!! How would I ever know that real pimpin took place almost 50 yrs ago. Iceberg Slim delivered his most heartfelt novel. Even more Heartfelt than his "Naked Soul" because these are real experiences, real people, and real pimping. It starts off with him as a child and his loving mother. His father treated him like crap, so they left, him and his mother met a man that would soon become Iceberg's role-model, Henry. But later his mother tricked Henry and she and Iceberg meet his dead beat dad Steve in Minneapolis. From there Robert (Iceberg) gets in a lot of trouble. His first taste of the street. Throughout the book Rob is in contact with characters that sometimes overshadow him. His mother, father Steve, stepfather Henry, 1st botton-whore Phyllis (the runt), Sweet-Top, Party-Time, Flat-Top, Chris, Rachel, and Leroy. The book shows his rise from a pimp dream to a pimp fantasy to a pimp hell! One of the hardest parts for me in the book was understanding the slang, this is slang used during the 1930's 40's and 50's! I found myself flipping back and forth between the glossary. Phyllis was his first cop and probably the most explored character in the book besides Iceberg himself. Even though she later bailed on him she was his first true ride or die chick. Chris (whom he had stolen from a crazed-Leroy who he later met in jail at the end of the book) was the only one to stand by his side when his stable was falling apart while he was in jail. Rachel was also the only one on his side while he was in jail his final time for breaking out of jail. Flat Top and Party Time introduced him to the Chicago pimping game. Although they later on destroyed their lives through pimping they opened the door for Iceberg. Sweet probably the most powerful character in the book was just so powerful and strong that I could just envision his live pad and his lavish dwellings. But as always the stress of the street was just too much and he ended up shooting himself in the head. Only for short periods of time was Iceberg on top of his game, he was trading his old hog for a new hog every year and was pickin up the scratch night after night from his stable (see that pimp vocab is with me now.) and for a short time after he broke out of jail he was the pimp's pimp! But besides that he was pullin somebody's mind or travelin from city to city to get some yellow or H (u gotta read this book to kno what I am talkin about :)) It's just a shame that he had to visit jail multiple times, pimp, beat, and brutalize many woman, and see his mother pass away before he could realize the wrongdoings of his life over the past 20 yrs. I think him sitting in the confined cell over those past 10 mos were a real wake up signal to him, Iceberg Slim. I did not read this book to become a pimp by any means. I read this book because Robert Beck is a celebrated black

Published by Thriftbooks.com User , 24 years ago
I think this Iceberg Slim's writing debut alongside with his "Naked Soul of Iceberg Slim" are monument classics to the extreme. Iceberg Slim, all BS aside tells the bitter truth about the pimp life during the 40's and 50's in the Black concrete reservation called Harlem. It shows the candid realities of the ghetto life and about the struggles of a man, frustrated with the setbacks and oppressions of a prodominately white society and despairingly turns to pimping and drug pushing as a way out. Now, I must further comment to some of the youngbloods out there that read Iceberg is dead in his grave, but if he were alive today, and read some of the entries here, he would not be flattered but pissed, to put it bluntly. When 'Berg meant for people (particularly young African-American males to read "Pimp", he intended to give you insight on the pimp game in order for you to see just what a hellish life he really lead as a pimp. It was not meant as a rule book, but a discouragement from the game.Oh, sure, there was the easy money, the power over women, and the false sense of respect as you ride down the street in that Cadillac. But what about the other dangers, like having to look over your shoulders for the police, f--king up your mind with that powder (although today we have crack, even worse). And the women, when they get older and more resentful, they'll cross you and set you up one day, so you have to constantly make sure that they stay mostly ignorant of your weaknesses as not just a player, but a man. If Ice were alive, he would tell you that the pimp life ain't so f--king glamourous, but it's hell, that's why he later settled down with his wife and kid and turned straight. So, brothers, as a former player myself, I'm telling you, don't diss your sisters, talking about pimping, because it's not a beautiful lifestyle. You want money, you want girls to dig you? Get an education, Get a f--king job, save some money and get some f--cking business. Because I tell you bro's you might say it's the "White Man's Fault" we're in the shape were in, but in truth, we've got nobody to blame but our own nappy head selves. Yeah, we were bad, cool, and slick back then, but in reality, we were stupid as hell. We were only to steps from the County Jail and that's where you'll end up if you don't check your mind. Stay your a--es in school, and keep your f--king a--es out of jail. Or else, just be another profit to the man. That's what I have to say and I know Ice would agree. Peace! END
Trustpilot
Copyright © 2022 Thriftbooks.com Terms of Use | Privacy Policy | Do Not Sell or Share My Personal Information | Accessibility Statement
ThriftBooks® and the ThriftBooks® logo are registered trademarks of Thrift Books Global, LLC