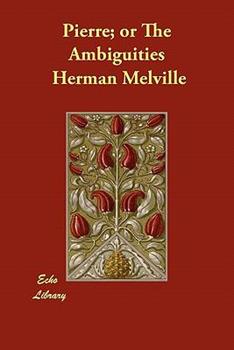 Pierre; or The Ambiguities

First published in 1852, ""Pierre"" is the only novel by Melville that takes place on land in the United States. The book was a critical and financial disaster for Melville, being universally condemned for both its morals and its style, and he never published another conventional novel, although he subsequently wrote and published many exceptional stories.

Published by Thriftbooks.com User , 15 years ago
"Pierre" is perhaps Melville's most difficult and challenging novel--and that's saying something. Despairing over his inability to support his family, Melville began writing a book designed to be popular--a counterpoint to the sensational novels written and read by contemporary women, using inspiration from French romances and even from Hawthorne's novels. Wavering between psychological melodrama and social satire, Melville ultimately increased the book's length by half again, incorporating his rage against the literary world by adding a subplot about a young man's desperate struggle to become a writer. The stumbling points for most readers are the novel's opaque prose, the "thees and thous" of its antiquated dialogue, and the labyrinthine hodgepodge of a plot. But the density is broken by colloquial asides, sparkling sarcasm, and an occasional passage that approaches Dickensian mirth, such as Melville's description of the "Preposterous Mrs. Tartan!" and her undercover attempts to play matchmaker between Pierre and her daughter: "Once, and only once, had a dim suspicion passed through Pierre's mind, that Mrs. Tartan was a lady thimble-rigger, and slyly rolled the pea." Behind the mask of the prose, however, is a modernist--even scandalous--story of a young, somewhat deluded man whose nihilistic descent leads to his destruction. Engaged to Lucy Tartan, Pierre adores his mother (their make-believe brother-sister relationship is almost creepy in its amorous undertones) and worships the memory of his long-dead father. This idyllic world is shattered by a missive from a woman, Isabel, who claims to be his half-sister--a claim supported by a more-than-passing resemblance to a portrait of his father. Complicating matters are his romantic feelings for this alleged half-sister. Convincing himself that he is choosing honor over duty, he breaks off his engagement and flees to Manhattan with Isabel, taking along a local woman who had been disgraced by an out-of-wedlock tryst. Disowned by his mother and cut off from his family fortune, Pierre finds shelter for this odd trio among bohemian neighbors in a dilapidated part of town. His finances slowly evaporating, Pierre struggles to support them by writing a novel. And then, just when the plot can barely handle another twist, his estranged fiancee Lucy shows up at their doorstep. To go any further would spoil the fun for the reader. Yet even such a basic plot summary omits some memorable and extraordinary scenes and sketches: his first meeting with Isabel, the near-riot that greets them during their first night in Manhattan, the eccentric philosopher who refuses to put his scholarly brilliance into written form. Adultery, incest, madness, murder, and suicide--all the ingredients of a bleak nineteenth-century melodrama are wrapped in archaic language and modern themes. In her life of Melville, Robertson-Lorant calls "Pierre" "a narrative nervous breakdown" that is a "minefield" for biographers. It's also a

Published by Thriftbooks.com User , 21 years ago
It's been since grad school, in the early 80s, that I last read Melville's "Pierre", yet it's stuck to my ribs ever since. I recall a quote from Freud, that he ventured nowhere that a poet hadn't preceeded him, and I have to wonder if he had this unfortunately obscure masterpiece in mind. For Melville examines themes of psychology and sexuality as no other writer before him...excepting perhaps the Pagan mystics of old Europe. "Pierre" brilliantly illuminates the darknesses of the human psyche, those tunnels and strange rooms few of us ever explore, lest we be artists and therefore honest and courageous enough to sacrifice our egos. Melville considered "Pierre" his most important work, a suitable novel to follow "Moby Dick" (justifiably considered by many THE great American novel). Yet I find "Pierre" more moving, because more tragic, than "Moby Dick"--Ahab is obsessed and while his obsessions mixed with his intelligence make him complex, he is clearly one-dimensional in his drive. Pierre, however, is drawn by instincts which defy his conscious realization, by desires which emanate from the dark belly of humanity and therefore can't be seen. Ahab wants revenge; Pierre wants fulfillment. For a landlocked person such as myself, "Pierre" is also an easier read: no boggling display of nautical terminology to refer to on every page. Yeah, Freud was right: he owed a great deal to the poets...and while, technically, Melville was more storyteller or novelist than poet, here is a poetry there that's unmistakeable. Embrace this book, and embrace the spirit of the great man who possessed the courage to write it.

Published by Thriftbooks.com User , 21 years ago
Pierre is perhaps the strangest novel of all time: bizarre, to say the least, but brilliant in its extravagence. At a minimum, it is one of Melville's central novels that deconstructs the entire myth of pre-war American society in its explorations of incest, patricide and psychosis. It is almost inconceivable that Melivlle really believed that it would be popular (which he did), for it shows the impossibility of writing as an American author, the impossibility of originality, and the impossibility of self-reliance. Beware: it is not for the faint of heart. It is demanding, relentlessly challenging, and very rewarding.

"Pierre " is more than a masterpiece.

Published by Thriftbooks.com User , 22 years ago
"Pierre," (written shortly after "Moby Dick") is called "The Book that ruined Melville." In fact, he never wrote another novel after "Pierre," but spent his last 40 years either unemployed or working as a customs official. But by the end of the 20th century a new generation of readers and critics had rediscovered him, and today his reputation is at the front rank of American authors. "Pierre" is a superbly controlled exploration of the deepest psychological motivations which underlie all human beha vior. If it is ambiguous, it is meant to be so, not in the sense of vagueness, but in the sense of many meanings. Melville, like Thomas Hardy is a master at depicting country life. And the conflicts in the novel are very much tied to country versus city living. The novel is Freudian, in its questing after the deepest reasons for human behaviors. Like most of us at some point in life, Pierre sees the father he had idolized as human and capable of error. His own values are put into question by the receipt of a note from his long-lost sister. Melville points out that we all walk "on a razor's edge of security.....that what we take to be our strongest tower of delight, only stands at the caprice of the minutest event-the fallling of a leaf, the hearing of a voice, or the receipt of one little bit of paper scratched over with a few small characters by a sharpened feather." Melville does not spare Pierre from disillusion but continues to open him up0 with an "electrical insight" into the character of his mother. He sees how she has been molded by the culture and how her love for him is not unconditional, but based upon his outward beauty and docile behavior. Melville deals with nature versus nurture as he contrasts the honesty of natural growing things with the subtlety of cultural influences. The author is at his best with descriptions like this: "The sounds seemed waltzing in the room; the sounds hung pendulous like glittering icicles from the corners of the room; and fell upon him with a ringing silveryness; and were drawn up again to the ceiling, and hung pendulous again, and dropt down upon him again with the ringing silveryness. Fireflies seemed buzzing in the sounds, summer-lightnings seemed vividly yet softly audible in the sounds. And still the wild girl played on the guitar; and her long dark shower of curls fell over it and vailed it; and still, out from the vail came the swarming sweetness, and the utter unintelligibleness, but the infinite significancies of the sounds of the guitar. The novel ends with a "Romeo and Juliet " death scene worthy of the original..."And from the fingers of Isabel dropped an empty vial-as it had been a run-out sand glass-and shivered upon the floor; and her whole form sloped sideways, and she fell upon Pierre's heart, and her long hair ran over him, and arbored him in ebon vines." The black hair of Isabel which enchanted Pierre at the beginning of the novel, covers his dead body
Copyright © 2020 Thriftbooks.com Terms of Use | Privacy Policy | Do Not Sell My Personal Information | Accessibility Statement
ThriftBooks® and the ThriftBooks® logo are registered trademarks of Thrift Books Global, LLC