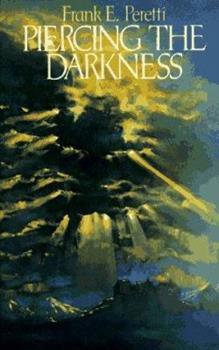 (Book #2 in the Darkness Series)

Leaders in the realm of darkness have mounted a new attack that will create chaos and cause defeat in the human beings who claim unity with their enemy, Christ. Readers will find themselves rooting for a most unlikely hero as her quest for inner peace exposes the most frightening war of all, the battle for the human soul. Be captivated anew as you enter the world of battling angels and demons that author Frank Peretti so masterfully uncovered in This...

In Praise of An Excellent Novel ! !

Published by Thriftbooks.com User , 17 years ago
Piercing The Darkness by Frank Peretti is a story about fences, mole hills, a spiritual battle, and the ultimate triumph of the Kingdom of God. It's a story of good and evil! The spiritual realm is very real and for this reason I admonish anyone who reads these words to develop their prayer life and relationship with the Lord. There's a Biblical account of Daniel where he asked the Lord to turn away His anger and let His face shine on Jerusalem. Daniel began his prayer by repenting for departing from the Lord's precepts and judgements and for disobedience and rebellion.Then Daniel confessed the greatness of God when he said, "O Lord, great and awesome God, who keeps His covenant and mercy with those who love Him and with those who keep His commandments." And when he said, "O Lord, righteousness belongs to you." And, "To the Lord our God belong mercy and forgiveness though we have rebelled against Him."While Daniel was praying for himself and the people of Israel, an angel came to him and said, "O Daniel, I have now come forth to give you skill to understand." Then the angel told Daniel that the Lord heard his prayers from the start-from the very first prayer when he humbled himself. The angel continued, "But the prince of the Kingdom of Persia withstood me twenty-one days." The existence of heavenly beings and demonic beings is not a fairy tale or bad dream. Although "Piercing the Darkness" is a fictional novel, there are spiritual battles going on all around us and for all we know, Peretti's account of the battles could be exactly how it happens. His accounts of these battles are believable.By the way, fences and mole hills are symbolic of a deeper meaning. Read the book to find out what that's all about.My favorite character is Sally Beth Roe. You will be surprised about the things this intelligent woman has done and does at every turn. Not only is she my favorite character, but she's a heroine in her own rights. If this was a true story, all the angels in heaven would be rejoicing over her. Read the book to find out why.This book is not for everyone, but I give it five stars. Reading for many hours at one sitting, I couldn't put it down. It had me captivated.

Published by Thriftbooks.com User , 20 years ago
I've read Piercing the Darkness a couple times, and it never ceases to freak me out. I can't help but check over my shoulder after reading this book. The book deals with the supernatural forces of God and his angels against Satan and his demons. Though they're invisible to the human eye, they see us and direct us for one side or the other. This is the sequel book, following This Present Darkness, which I didn't like nearly as much. The book follows Sally Beth Roe, a burn-out with a dark past, who finds herself caught up in some strange events that only progress to the stranger. Forceing her to flee her home in Bacon's Corner. The book is just creepy! While Sally flees we watch as demons chase her with one goal, to ultimatly kill her. I could write about this book all day, the plot is thick and deep and the characters believeable. But what really made this book stand out is the fact that once you start reading it, you began to wonder, "What if there really are demons? What if they're here in this room right now?" It just creeps you out! A first class creepy book with religious themes, who wouldn't love it?

Published by Thriftbooks.com User , 20 years ago
What a rivetting, thought-provoking reminder that we war not against flesh and blood but against the spirits and the Prince of the air (Eph. 6:12). Once again, in keeping with the spirit of "This Present Darkness," Peretti has skillfully pictured what takes place around us every day, unseen and seemingly un-noticed. I found myself looking forward to the daily moments that I would be able to sit down and read "Piercing the Darkness" uninterrupted. With each delightful turn of the page, the words captured my undivided attention, while challenging my spirituality. I found myself wanting to pray for the persecuted Christians, wanting to reach out to them in Christian support; but then I had to remind myself that it was just a book! Never before this book have I seen such a beautiful, rapturous description of receiving Christ as one's Savior. Peretti has given his readers a rare, yet human, glimpse at what it just might be like when Jesus redeems another soul to Himself. What a challenge this book has given me to pray with more fervor, to boldly come before His throne, to rejoice in His love and the protection of His children. I hope and pray that Peretti continues to write such challenging material.