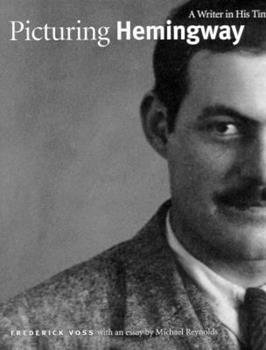 Picturing Hemingway: A Writer in His Time

by Michael Reynolds and Frederick Voss

A collection of more than 70 portraits of Ernest Hemingway and those around him, commemorating his life and career. The drawings, paintings and photographs are accompanied by two essays, one on the man as a literary icon and the other examining his life in the light of various portraits.

Portrait of the Artist in Pictures

Published by Thriftbooks.com User , 15 years ago
After recently rereading A FAREWELL TO ARMS, I became interestesd in Hemingway again and revisted this book of photographs that I had purchased after having seen the National Portrait Gallery exhibit coinciding with the hundred birthday of Hemingway in 1999. This book accomplishes what few photography books do: it includes practically as much written information about the writer-- from the informative essay by Michael Reynolds to the well-documented captions that accompany the pictures-- as photographs, thus creating a mini-biography of the writer as well. The lives of few writers of the 20th century were followed as closely by both the media and the general public; certainly no author was photographed more. There are pictures here of Hemingway by Robert Capa (1937); the most famous portrait by Yousuf Karsh (1957) and the shot by John Bryson (1958/58) of Hemingway with a most obvious comb-over. Also included are paintings and sketches of the writer in addition to pictures of his literary friends-- Fitzgerald, Joyce, Dos Passos et al.-- as well as photographs of his four wives and his first love, a Red Cross nurse, the inspiration for the character Catherine in A FAREWELL TO ARMS. You also get to see the covers of Hemingway's major novels as well. Hemingway wanted to be the best writer of his generation. Whether or not he accomplished his goal, he received the Pulitzer Prize in 1953 for his short novel THE OLD MAN AND THE SEA and the Nobel Prize for Literature in 1954. Considered tame by today's standards his novels were controversial during his time because of their profanity and sexual content. His editor at Scribner's insisted that he delete most of the profane language from his works, his own mother found his writing "filthy" and the Boston police seized the June 1929 issues of Scribner's magazine that contained the second installment of A FAREWELL TO ARMS from newsstands because of the "salacious" content. PICTURING HEMINGWAY is a good introduction to a whole new generation interested in this writer as well as a nostalgic visit for already fans.

Published by Thriftbooks.com User , 19 years ago
Ernest Hemingway found himself (or rather photographers found him) in some of the most diverse and engaging settings one might see a writer. From Key West to Africa to Idaho to Spain to Cuba to New York City ... he led a photogenic life. "Picturing Hemingway" does him justice with this collection, which is worth a hour or so paging through it. The most ardent fans of Hemingway, however, won't find a lot of new images to enlarge their view of the writer, even if this is worth adding to your shelf -- your likely sagging shelf -- of Hemingway biographical works.

Published by Thriftbooks.com User , 23 years ago
Voss, Frederick and Michael Reynolds. Picturing Hemingway. Yale Univ. Pr. Jun. 1999. c.160p. photogs. bibliog. illus. index. ISBN 0-300-07926-5. $35. LITThis volume is being produced to accompany an exhibition at the National Gallery in Washington, DC, June 18-October 3. Beyond simply another collection of pictures, this is more a visual biography revealed through family snapshots, paintings, and formal portraits with explanatory captions. It also includes book covers as well as images of famous friends like James Joyce, Scott Fitzgerald, and John Dos Passos plus a top-shelf essay by leading biographer Michael Reynolds on Hemingway as an icon. The perfect visual companion to the Hemingway centennial celebration. Highly recommended.--Michael Rogers, "Library Journal"
Trustpilot
Copyright © 2022 Thriftbooks.com Terms of Use | Privacy Policy | Do Not Sell or Share My Personal Information | Accessibility Statement
ThriftBooks® and the ThriftBooks® logo are registered trademarks of Thrift Books Global, LLC