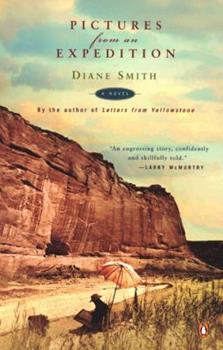 Pictures from an Expedition

In her award-winning novels, Diane Smith presents a unique and distinctive perspective on the American West. Told through the reminiscences of scientific illustrator Eleanor Peterson, Pictures from an Expedition is set in 1876 and tells of a diverse band of adventurers heading west to the desolate badlands of Montana to work on a dinosaur fossil dig. The story recounts the experiences of this field crew as they argue over theories of evolution and...

Published by Thriftbooks.com User , 15 years ago
This was a thoroughly enjoyable book, which incorporated fascinating facts about history and geography with some of the most memorable characters to come along in modern literature. I cared about these people and came to know them and want to know more about them. As one other reviewer commented, the book ended all too soon! Smith not only creates a credible world, but tells the tale within an imaginative framework. I'm off to find other books by this wonderful author!

Published by Thriftbooks.com User , 19 years ago
This book brings to mind Shakespeare's The Tempest , and not only because Prospero, in the character of Augustus Starwood, is constantly reciting from it.This is another telling of the classic incidental gathering of travellers on a journey. This time the quest is for bones, old and buried in Northern Montana in 1876. The author has given each character a full life and when they disperse, as all such gatherings do, it's a hard and sorrowful thing.I really liked this book a lot. And I don't say that about every book I read.

Published by Thriftbooks.com User , 19 years ago
I also read Diane Smiths first book and while that was a good read this book is head and shoulders above it. Augustus has to be one of my favorite fictional characters of all time. Its the way Ms. Smith weaves the tale that makes this book so memorable.She brings together all the different races, politics and nature colliding that were the west.I never knew that Dino digging started that far back and the skulduggery that went with it. I also did not really think of the newspapers playing to public opinion by using pro Indian or Wild Savage photos to promote a cause. This is a heartbreakingly beautiful novel.My only complaint is the Library Journal review above in which a key plot line is given away.Can't you get better reviewers than this.

Published by Thriftbooks.com User , 19 years ago
After reading Ms. Smith's first book, "Letters from Yellowstone", I eagerly awaited the release of this new effort. Set again in Montana, the scope of her new story is grander and even more riveting. Once more, the main character is a woman whose fate is cast amongst a group of men in pursuit of their own peculiar ambitions. Smith has created characters here that are rich and complex; and the story, which revolves around the search for dinosaur bones in the 19th Century, is a marvelous journey into our American past and into the minds & hearts of the principles involved. The star of the show is most definitely Augustus Starwood, the eccentric artist who accompanies our heroine....Eleanor Peterson....on her commission to illustrate the potential findings of the Montana expedition. And though the narrative revolves around his work and his oft bizarre personality, the narrative itself is told through the experience of Miss Peterson who evolves into an enduring and fascinating figure. Beyond the enticing prospects of fossil discovery and the importance (or frivolity) of these efforts, we are treated to a group of people literally torn loose from their moorings after the Civil War; thrown into the most extraordinary circumstances.....and the revelation of their innermost desires and fears are amplified throughout this finely crafted book. A true pleasure to read.....and certainly a treat for anyone who enjoyed Smith's previous effort.

What a delightful surprise!

Published by Thriftbooks.com User , 19 years ago
I read this book at a gallop. But when I was finished I was sorry I had reached the end so quickly.Diane Smith has an utterly original mind. Her books are unlike any others I have read. She is intelligent, witty and imaginative and so are the characters she invents. Ms. Smith is never predictable. If you think you know what is coming next you will find yourself proven wrong.I have been reading and thinking for half a century and I found things on the pages of this book that left we breathless with wonder.I won't go into detail. Read this one for yourself and see if you, too, aren't pleasantly surprised.
Trustpilot
Copyright © 2022 Thriftbooks.com Terms of Use | Privacy Policy | Do Not Sell My Personal Information | Accessibility Statement
ThriftBooks® and the ThriftBooks® logo are registered trademarks of Thrift Books Global, LLC