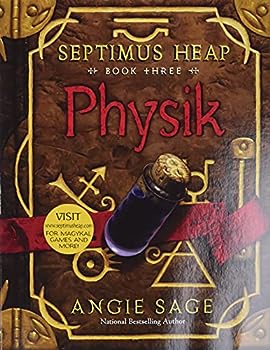 (Book #3 in the Septimus Heap Series)

The third book in the internationally bestselling Septimus Heap series by Angie Sage, featuring the funny and fantastic adventures of a wizard apprentice and his quest to become an ExtraOrdinary... This description may be from another edition of this product.

its one of my favorite book series but...

Published by Justin , 2 years ago
I loved the book, always have, the only issue with this book was that it is an 'uncorrected proof' I wasn't made aware of that, but so far its okay. for context, uncorrected proofs are books released by the publisher or author not meant for sale, or just in general like, a book with some errors that need to be fleshed out. but also finding an uncorrected proof is somewhat rare, supposedly so I'm not really complaining.

Readers literally will be on the edge of their seats

Published by Thriftbooks.com User , 15 years ago
Calling all Harry Potter fans! If the bespectacled wizard has you yearning for more fantasy stories, then you're going to love the Septimus Heap series, with its wild adventures and quirky characters, imaginative spells and bizarre contraptions --- not to mention wizards (including an ExtraOrdinary Wizard), witches, evil schemes, hidden royalty, dragons, spell charms, human-munching trees, vicious beasts, ghosts and much more. These books sparkle with laugh-out-loud humor and, thanks to the characters' close-knit family ties, warm the heart as well. It is said that the Heaps' newest baby, Septimus, will have great powers because he is the seventh son of the seventh son. In the first installment, MAGYK, we meet some amazing characters: the Heap family, bossy ExtraOrdinary Wizard Marcia Overstrand, a "queenling" who doesn't know she's a princess, Stanley the Message Rat, a mysterious boy called "Boy 412," the evil DomDaniel, and a ghost who used to be the ExtraOrdinary Wizard. As good and wicked forces fight each other to gain power and secret identities are uncovered, readers literally will be on the edge of their seats. --- Reviewed by Terry Miller Shannon

Great! How long till book 4?

Published by Thriftbooks.com User , 15 years ago
This is a great next step in the life and times of Septimus Heap along with his family and friends. If you just stumbled across this book randomly and haven't yet read books 1 (Madyk) and 2 (Flyte) you really should get them and read them first. Although in some series you can pick up any book at any point in the series and be OK with it as a stand alone story - that is not the case in this series. This would be an OK book by itself although somewhat frustrating because you wouldn't understand a lot of the details and references to characters if you hadn't read the first 2 books. You really need the history covered in the first 2 books to really enjoy it. So I would strongly recommend that you start at the beginning and read the first 2 books before moving on to this one. This writer creates colorful characters and interesting situations and weaves them all together into a great story with lots of humor, twists, and turns. As for it being listed as a young adult series, well sure, they can read it too! Really it is for all ages. Now I am eagerly waiting for book 4! R Walker Avid Reader

Published by Thriftbooks.com User , 15 years ago
Just love this series! A must read for young and old!

Physician, heal thyself - but if that fails, get some help

Published by Thriftbooks.com User , 15 years ago
Fans of Magyk and Flyte will be very pleased to know that Angie Sage has done it again. Physik is the third in the young adult series about that OTHER wizard boy named Septimus Heap, and as I understand it, there will be two more books in the making. Physik is pretty long at over 500 pages, and rivals the more recent Potter books for complexity of plot, skullduggery and dark deeds. Although the book deals with some very DARKE subject matter, Sage manages to keep it light with just the right touch of humor, juggling her characters with consummate skill, while adding her exciting new characters into the mix. In Physik, we see Septimus becoming extremely interested in the study of Alchemie, and more specifically, ancient medicines and cures as discovered by Marcellus Pye five hundred years before. This is terribly upsetting to Marcia Overstrand, the ExtraOrdinary Wizard to whom he is still apprenticed, as she'd much rather that he concentrate on studying for his Prediction exams than meddle with such "drivel". Unfortunately for the majority of the characters, old and new, major or minor, there's a new villainess in town, and when the quite substantial ghost of the dreaded Queen Etheldredda is accidentally let loose, along with her venomous pet Aie Aie, you can make a safe bet that there's going to be lots of trouble. Coincidentally, or maybe not, a deadly "sickenesse" befalls the populace, and just at the wrong time, a young trader named Snorri (who sees dead people) arrives with not much else but her boatload of merchandise and her pet cat for protection. She soon finds herself in the middle of a time warping adventure with Septimus, Jenna and Nicko, as they muck around with not only boats, but looking glasses, fume cupboards, ancient potions, sheep bones and a flatulent dragon that needs to be in diapers. With a little help from their friends, they must get Septimus back to Marcia's for safe keeping, cure the deadly "sickenesse", and foil the evil Queen's plan for living forever. You should be warned that the author has no misgivings about killing off a character here and there, and of course, some characters have actually been dead for centuries, but the story is so well told that the only part sure to send a shiver up your spine is the thought of the Queen's duckling a l'orange dinner. Highly recommended if you've read Magyk and Flyte, but not until then. Amanda Richards, April 18, 2007
Trustpilot
Copyright © 2022 Thriftbooks.com Terms of Use | Privacy Policy | Do Not Sell or Share My Personal Information | Accessibility Statement
ThriftBooks® and the ThriftBooks® logo are registered trademarks of Thrift Books Global, LLC