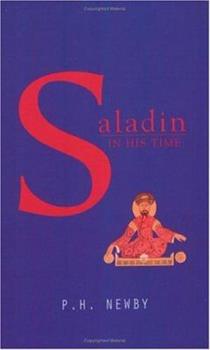 Honored by Christian and Muslim alike, celebrated by Dante and Sir Walter Scott, Saladin reigns as the most famous of all Islamic heroes. As sultan of Egypt, Syria, Yemen, and Palestine, he achieved great success in the wars against the crusaders--particularly with his capture of Jerusalem. And, his disciplined army stood in marked contrast to the Christians, who slaughtered indiscriminately following their victory in 1099. This thoroughly researched...

Biography of a Virtuous Leader

Published by Thriftbooks.com User , 13 years ago
Mr. Newby's biography of Saladin is a great primer on the topic. The detail is kept at a level to allow a lay person to get a feel for the culture, custom and environment that Saladin lived and operated in. The reader is able to get an appreciation of the strength of Saladin's character as an honourable, truthful, incredibly generous and simple man who was also capable of exemplary sternness; qualities that Mr. Newby illustrates were used to unite the Muslim community in Egypt, Syria and the Jezireh into a fighting force capable of ousting the Crusaders from Jerusalem. In fact, his character was of such virtue it fascinated Europeans (12th century) that a Muslim leader could possess such "Christian" qualities. Mr. Newby covers the events, dates and political intrigue of Saladin's life, but the basic undertone is of Saladin's character and how he used it to unite the Muslim community and consolidate his power. Saladin in His Time is a well written book on one of the more interesting personalities of the 12th century.

Comprehensive history of Saladin with lots of detail and depth

Published by Thriftbooks.com User , 16 years ago
Saladin in His Time was an epic trip through the entire course of Saladin's rise to power and military campaigning. I listened to the unabridged audiobook and was transported to another time due to the mastery the author has for the detail of the subject matter with asides on medieval technology, political intrigues, etc. Highly recommended for someone already familiar with Saladin.

Published by Thriftbooks.com User , 21 years ago
It was difficult not to be a partisan at the turn of the last millennieum. Two great cultural and religious forces, Chrtisianity and Islam, were meeting in a humdinger of a contest The Crusades. To behave the way he did in those bigoted times is what makes Saladin great. When he took Jerusalem in 1187, not one Christian was harmed. In contrast almost 90 years ago (1099) when Christians took Jerusalem under Tancred the Norman, they ended up slaughtering just about every Moslem they could lay their hand on inside Jerusalem. P H Newby's book is an extremely readable account to start off your quest for the real Saladin. Newby doesn't lionize Saladin, he puts the great man in perspective. For example, after taking Egypt, Saladin refused to come face to face with his former prince: Nur-el Din. The reason? He feared that his ertwhile prince may ask him to abdicate the throne of Egypt. The other instance was his killing of Reynald de Chatillon. Instances such as these which show Saladin't underbelly as well details of his grit and character make Newby's account very readable. He is also takes a more modernist view on Arab side of the tale. This is an excellent primer to a more abstruse and dour follow-up text called Saladin: The Politics of Holy War by Lyons and Jackson.
Trustpilot
Copyright © 2022 Thriftbooks.com Terms of Use | Privacy Policy | Do Not Sell My Personal Information | Accessibility Statement
ThriftBooks® and the ThriftBooks® logo are registered trademarks of Thrift Books Global, LLC