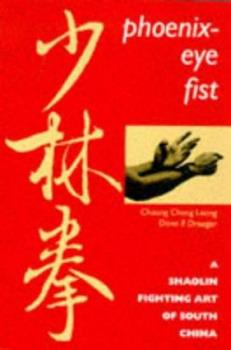 This work provides an introduction to the Chuka Shaolin fighting art of South China, an easy-to-use method of self-defence and a form of training for both health and overall physical fitness. It presents in step-by-step detail the history of this martial art, fundamental techniques, training methods, the complete basic pattern for solo practice and examples of the art as actually used in self-defence.

Published by Thriftbooks.com User , 17 years ago
If only more publications by Chinese authors could be like this book - no pretense, no intentional withholding of sharing of techniques that make the system work. I have high regards for Phoenix-eye Fist ever since reading this book. In fact, I have assimilated this style of kung fu into my fighting system. Phoenix-eye fist is powerful and deadly when learned properly.

Better than the 'Secrets' book

Published by Thriftbooks.com User , 19 years ago
As much as I'm a fan of Mark V. Wiley's work, I can recommend this book without reservation over the newer "The Secrets of Phoenix-Eye Fist Kung Fu: The Art of Chuka Shaolin". This book is simple, direct, and highly informative for anyone wishing to begin training in Chuka Shaolin or supplement their current martial arts knowledge. If you already have the 'Secrets of' book, there's still a good amount you can learn from this book. One caution, though; if you are interested at all in the weapons of Chuka Shaolin, then this book is not for you, as they go uncovered (the significant coverage afforded them in the 'Secrets of' book was one of the reasons I chose this book instead)...

Published by Thriftbooks.com User , 20 years ago
The book does what it sets out to do, teach the basics of Chuka Shaolin and the phoenix-eye fist. The book teachs through photo's and text. You will learn basic arm and hand tecniques as well as basic stances. The photo's are great, they will show you the correct procedure. Also shown in this book is the basic Chuka Shaolin pattern, Kai-Sai. You will need to find an instructor to learn the system. Books can only go so far...and this book is design for the basics.

What i thought of this book.

Published by Thriftbooks.com User , 21 years ago
This book is not just useful for Chuka shaolin (which is what is photographed), but also the various styles of Sth. Mantis, not to mention offshoots of white eyebrow (Pak Mei), and also i think Dragon, which all share the Phoenix-eye fist punching system. The book however, will not teach you the application of 'ging'(sacred power). That requires a teacher. I found it's use mostly in the correction of my stance by comparing it to the photo's and also the snap-kick movement.

Published by Thriftbooks.com User , 24 years ago
I thought that the book on Phoenix-Eye Fist was great. I have a small amount of experience with the style, and found that the book displays a complete fighting art. I would recommend the book for those with over three years of experience. The only thing that bothered me was that it didn't really give detaile explanation of the application of the techniques found in the form. I had to draw from my past experience in martial arts to access the value of each move. I liked the book, and I might note that it has some very advanced guard changing applications for straight, outer, and inner guard changing that remind me of the asking hands techniques found in most other Shaolin styles. -A good read that is challenging!
Trustpilot
Copyright © 2022 Thriftbooks.com Terms of Use | Privacy Policy | Do Not Sell or Share My Personal Information | Accessibility Statement
ThriftBooks® and the ThriftBooks® logo are registered trademarks of Thrift Books Global, LLC