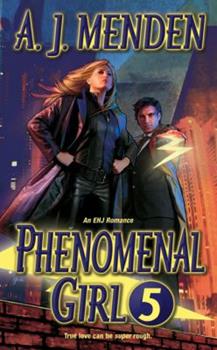 (Book #1 in the Elite Hands of Justice Series)

Lainey Livingston has just been made a member of the Elite Hands of Justice, the world's premiere cadre of superheroes. But no one gets a free pass to active duty, and Lainey's next test is going to be her hardest. She's to train with the Reincarnist.

Published by Thriftbooks.com User , 13 years ago
With a slightly different angle in a wildly popular genre, A. J. Menden has given us a highly electric shock with her debut novel. Sometimes quirky, other times emotional, but always sastisfying, Phenomenal Girl 5 will have a wide appeal to many readers. Ms. Menden's obvious affection for comics is mixed with great character development, plot strategy, and just darn good writing. What impresses me more than anything is Ms. Menden's ability to make her characters seem real no matter how fantastic. Not being a "fan" of this genre, I found myself helplessly drawn to the storyline and not wanting to put the book down. (It sucked me right in!) Definitely worth the read, Phenomenal Girl 5 is a phenomenal start to what looks to be an outstanding career for A. J. Menden. www.wvbooksonline.com

Published by Thriftbooks.com User , 13 years ago
I don't want to repeat what the other reviewers said because I agree with everything and they said it all. Fantastic characters, awesome plot line and story and the romance is to die for. I highly recommend this story for lovers of comic books, romantic story lines, and over all fun.

A.J. Menden is truly a superhero in the world of writers.

Published by Thriftbooks.com User , 13 years ago
5 Tombstones! Lainey Livingston has never really fit in. Orphaned as a child, she was placed in a foster home until her special powers earned her a place at The School. Being one of the youngest and kind of a nerd, she was picked on by the other kids. The one thing that got her through was her goal to become a member of the Elite Hands of Justice (EHJ) and now that dream is about to become a reality. Her final test will be to survive two years of training with the legend known as The Reincarnist. Robert Elliott is the Reincarnist, a magic-user who has lived multiple lifetimes. When his current life ends, he is reincarnated as a 20 year old and begins again but his memories of past lives are vague. He keeps journals so that he does not lose track of who he has been and the people he has known. He refuses to return to active member status with the EHJ because they have become so focused on their celebrity status, they have lost site of the initial purpose of the organization; to protect the world from evil. He prefers to spend his time training the new recruits, hoping that maybe one day, one of them will restore the EHJ to its' true purpose. When Lainey meets Robert, she is not prepared for the feelings that he awakens within her. Robert guards himself against emotional attachment for becoming involved with others always leads to heartache and disappointment for the ones he leaves behind when he is reborn. Neither of them are prepared for a love that will transcend time and become an integral part of a prophesy that predicts the destruction or salvation of the entire World. A.J. Menden is truly a superhero in the world of writers. She has taken the concept of comic book heroes and created a contemporary world for them where they are dealing with the same problems that all of us ordinary mortals deal with on a daily basis. Her characters have to find a way to juggle heartbreak, love, betrayal and a myriad of other emotions and issues while still finding time to prevent chaos, death, and destruction on a daily basis. Lainey, while in no way perfect, is an absolutely perfect heroine in what promises to be a fast-paced and exciting series. If the books to follow are half as good as this one, I will be a very happy reader. Reviewed at Bitten by Books Paranormal Fiction Review Site by Lori

Phenomenal Girl 5 moved me to tears and proves that good does triumph over evil.

Published by Thriftbooks.com User , 13 years ago
Phenomenal Girl 5 (SHOMI) by A. J. Menden Mass Market Paperback Paranormal Romance - October 28, 2008 5 Stars Once I started reading this book, I literally could not stop! This book began with good, light-hearted fun and intriguing characters. And then it became so MUCH MORE! It has surprising depth and explores the characters personalities and emotions in a way that makes you love them. Phenomenal Girl 5 moved me to tears and proves that good does triumph over evil. If you are looking for a book that thrills, has well developed characters and a fascinating plot that keeps you guessing, this is it! Lainey Livingston has been driven by one goal - to be a superhero. Not just any superhero, a member of the exalted Elite Hands of Justice (EHJ); the premier super hero group in the world. In the beginning, Lainey is promoted from her old team to the EHJ. But before she starts active duty, she must mentor with the founder, The Reincarnist. He is the smartest, most powerful magician alive. Although Lainey tries, she cannot help feeling attracted to him. The Reincarnist has never met a remarkable woman like Lainey through all his past lives. The attraction between them is both touching AND heated! I have been reading romance novels for a very long time and this book is one that grabbed my attention and never let it go! If I hadn't finished it at 4am, I would have immediately re-read it! A. J. Menden must have spent a lot of time crafting a novel with such originality and eloquence. I admire her skill. Even though the plot takes surprising twists and turns, it was a deceptively smooth and easy read. This is a `phenomenal' book! It already has a place in my "keeper" shelf. Phenomenal Girl 5 is a real hidden gem to be treasured again and again. Reviewed by Steph from Bookaholics Romance Book Club

Published by Thriftbooks.com User , 13 years ago
This superhero book is full of romance and suspense that keeps you turning the pages! Highly recommend!!
Trustpilot
Copyright © 2022 Thriftbooks.com Terms of Use | Privacy Policy | Do Not Sell My Personal Information | Accessibility Statement
ThriftBooks® and the ThriftBooks® logo are registered trademarks of Thrift Books Global, LLC