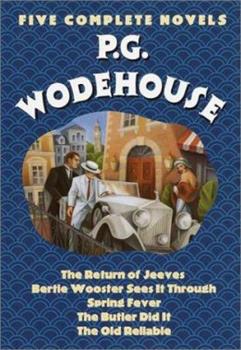 P.G. Wodehouse : Five Complete Novels (The Return of Jeeves, Bertie Wooster Sees It Through, Spring Fever, The Butler Did It, The Old Reliable)

This description may be from another edition of this product. No missing pages, Water Damage, or stains. Spine shows creasing. This is a readable copy.

The butlers definitely did do it!

Published by Thriftbooks.com User , 13 years ago
This collection of five P G Wodehouse novels is positively teeming with butlers, old butlers, young butlers, fat ones, thin ones, rich ones, poor ones, even some with shady pasts! The collection includes: THE RETURN OF JEEVES: Bertie Wooster loaned Jeeves out the Earl of Towcester while Bertie was otherwise engaged. Lucky for the Earl and his family that Jeeves was there to sort out the various star crossed lovers and shady dealings that were taking place in this stately English country home. BERTIE WOOSTER SEES IT THROUGH: Bertie returns and manages to once again need Jeeves to extract him from the clutches of Florence. SPRING FEVER: A delightfully eccentric British peer competes with his devious butler to romance the cook. THE BUTLER DID IT: A long ago tontine causes strange romantic entanglements. THE OLD RELIABLE: The usual Wodehouse madness transported to the glamor days of old Hollywood.

Unexpected Results of a Marital Tontine and a Trio Tango!

Published by Thriftbooks.com User , 16 years ago
Fans of P.G. Wodehouse often refer to Jeeves as a butler, but as Bertie Wooster reminds us, Jeeves is actually a gentleman's gentleman, a valet. But on occasion, Jeeves is pressed into service as a butler, and performs quite well. Imagine the surprise that many P.G. Wodehouse fans have when they open The Butler Did It and find that the butler in question is a Mr. Augustus Keggs, the English butler for one J.J. Bunyan, an American multimillionaire. But this Keggs is a worthy character who fans of Jeeves will find to be very rewarding. The book has one of the most intriguing plots in all of the Wodehouse novels. As the story opens, it is the night of September tenth, 1929, just before the collapse of the American stock market. Bunyan is entertaining a group of bored millionaires who are having a hard time deciding how to spend the money they are raking in. Among his guests is Mortimer Bayliss, his art curator, who cannot help but want to stir up the philistines. Bayliss proposes that the men each put up $50,000 with the proceeds of the tontine to go to the last of their sons to marry. Naturally, they have to keep the whole matter a secret or deny themselves the possibility of ever having grandchildren. The book then glides forward in time to the mid 1950s in England as the end game of the tontine arrives. Mr. Keggs is a fellow tenant with Lord Uffenham (who has fallen on hard times), whom he formerly served as a butler, and his niece, Jane Benedick. Mr. Kegg's own niece, Emma, is engaged to marry Roscoe Bunyan, son of the late J.J. Bunyan, of the tontine. Like the wise and omniscient butler he is, Mr. Keggs had recorded the conversation that night and knows all about the tontine. The tontine is down to Roscoe and one other. Mr. Keggs decides that the time has come to intercede. Jane is engaged to one Stanhope Twine, a hopeless sculptor, but the two cannot marry because Twine hasn't the funds. Mr. Keggs suggests to Roscoe that Twine is the other member of the tontine, and that Twine will marry in a heartbeat if he can get hold of some money. Keggs suggests that Roscoe buy a percentage of Twine's future earnings in exchange for a payment now. Keggs naturally hopes to be well paid for his advice, and is thoroughly annoyed when Roscoe only gives him fifty pounds for information about a tontine payment of over a million dollars. Here's where the plot begins to unravel. Twine takes the money and jilts Jane. Roscoe jilts Emma, and Cupid is not exactly being served. But Keggs has been playing a game. Twine isn't really in on the tontine. Next, Keggs sells the information to Roscoe for $100,000. Roscoe doesn't want to pay and hires a detective to get back the agreement as well as Roscoe's letters to Emma. In the meantime, Bill Hollister falls head over heels for Jane and she for him . . . having known each other as children. Bill Hollister's name really is in the tontine, and Mr. Keggs has to try to sort out all of the romances and the money. Ultima

Published by Thriftbooks.com User , 23 years ago
This collection is absolutely terrific. Wodehouse has written better Jeeves stories, and for some reason the editor saw fit to omit a Blandings Castle story, and yet the book is nonetheless wonderful. "The Butler Did It" is possibly the best story Wodehouse has ever written. Which means it is the best comedy ever written by anybody anywhere. A must buy.

Escapism doesn't come any better than this!

Published by Thriftbooks.com User , 23 years ago
When I was about 12 years old, I complained to my father on our weekly trip to the public library that I had read everything in the children's section. He said, I think you're ready for Wodehouse, and took me to the W's in the grown-up fiction department. That was the day my father opened up for me the glorious, silly, impossible dream of a world that is P.G. Wodehouse. It's a world that I never tire of. I divide people into those who love Wodehouse and those who just don't get it. Loving Wodehouse creates an indissoluble bond between friends. The only possible points of contention are which is the funniest book, which is the funniest incident and (difficult indeed) do you like the Bertie Wooster stories better or the Blandings Castle ones. (Psmith is lovely, but not a contender for best of the best.) At Sunday dinner my family could be reduced to helplessness by one of the six brothers and sisters or my mum or dad recounting a story from the latest book we'd read. Do you remember when Bertie looped back the last ring over the bathing pool causing Tuppy Glossop to drop into the water in full evening dress? Or when the ghastly Madeline Basset announced that the stars are God's daisy chain? I mean to say! I'm not a slave to tradition but some traditions are worth honouring. A couple of years ago I had the pleasure of giving my then 13 year old son his first Wodehouse novel. Like his mother and grandfather before him, he laughed until he cried and then asked for more. Thanks to Mr. Wodehouse's astonishing output, there are lots more. After 30 years, I still haven't read them all. But nothing can beat the pleasure of rereading (maybe for the 20th time) a tried and true favourite. Remember the time Gussie Fink-Nottle got pie-eyed before handing out the prizes at the Market Snodsbury Grammar School? Remember when Sir Gregory Parsloe-Parsloe tried to nobble the Empress of Blandings? Remember when Lord Emsworth's secretary got locked out and flung flowerpots at the window? W! odehouse never claimed to write great literature, but he underestimated himself. What he wrote was absolutely perfect, the best of its kind. Escapism doesn't come any better than this. I will always be grateful to my dad for pointing me to the W's that day in the library.
Copyright © 2020 Thriftbooks.com Terms of Use | Privacy Policy | Do Not Sell My Personal Information | Accessibility Statement
ThriftBooks® and the ThriftBooks® logo are registered trademarks of Thrift Books Global, LLC