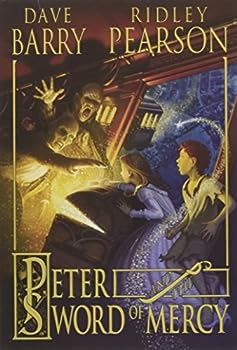 (Book #4 in the Peter and the Starcatchers Series)

This description may be from another edition of this product. The latest Peter Pan adventure by the "New York Times"-bestselling team of Barry and Pearson is set in 1901 London, where it's up to Molly's 11-year-old daughter Wendy to keep a secret cache of...

Published by Thriftbooks.com User , 11 years ago
Like the rest of the Starcatchers books this one was great! Although while the other books were more of a prequel to Barrie's Original Peter Pan, this one took a totally different direction. Peter meets and has adventures with Wendy Darling. ANd this Peter isn't as courageous as the original peter pan. But Tinkerbell is way funnier!

Published by Thriftbooks.com User , 11 years ago
This is a great addition to the Starcatcher series, because it introduces a historical aspect on account of the Great Charlemagne. The book is also fantastic in plot trajectory, bringing back the old characters to add suspense and promise to story. Again Gregory Call introduces nice illustrations that re-captivate the imagination for our younger readers. I recommend reading all of the other books before diving into this one, because of the use of flashbacks referencing previous engagements with villains and heroes alike. The only aspect of the story that I didn't really like was the unexplained parts the beckoned for answers but never quite achieve in answering. Hopefully Dave and Ridley conjure another episode to retrace the rise of the Others and their new powers.

Another high-quality, exciting adventure for Peter, Tink and friends

Published by Thriftbooks.com User , 12 years ago
All is good in Neverland. So good, in fact, that Peter never expects to leave the wonderful island where he and the Mollusks reside. Most of the Starcatchers are old or have passed on, and the stardust that remains is well hidden from the rest of the world. Peter, Tink and the band of ever-young Lost Boys could not ask for a better situation. However, there is the presence of the infamous Captain Hook. Hook is stranded on the island with a few of his men, but he is sure to stay away from that "wretched flying boy." They live a kind of peaceful co-existence. But as new developments arise, that all is about to change. In London, Queen Victoria's long reign has ended with her passing. Now her son, Edward, is the natural heir to the crown. But things do not go smoothly as the new king seems to be under some kind of spell. Forces are at work to keep him under the power of an evil band of men, led by the powerful Ombra, aka Von Schatten, a group that consists of the ferocious man/creature known only as the Skeleton: "...his face, which was as hideously scarred as his hand, the shiny purplish skin drawn tight to the skull, hairless except for a few random tufts. A lone yellow eye glared from a deep socket; where the other eye would have been was only a hole. There was no nose; the mouth was a lipless cavern that could not fully close and thus revealed jagged teeth in a permanent mirthless grin." This ruthless group is determined to get the tip of Curtana, which is Charlemagne's famous "Sword of Mercy." It is the Sword of Mercy that will give them the key to unlocking the chest that hides Stardust, the magical ingredient that grants immortality, youth and, of course, wealth. While the Royal Family lies in peril, there are also strange happenings in the London Underground. People are disappearing, and James Smith -- once one of the Lost Boys himself -- has reason to believe that there is a conspiracy afoot. He stops one evening to visit with Molly and express his concerns, but too soon both James and Molly disappear. Now Wendy, Molly's 11-year-old daughter, is determined to locate her mother; to do that, she must first find Peter Pan. She has overheard enough of the conversation between her mother and James to know that only Starcatchers will understand the importance of this situation. Thus begins one of Peter's most dangerous adventures ever. Many familiar characters appear in this wonderful book: Wendy's Uncle Neville, a scientist and inventor of the Ornithopter, a flying machine that helps Wendy get to Neverland; Ammm, the porpoise leader (thank goodness Wendy speaks Porpoise); Lord Aster, Wendy's amazing grandfather; Shinning Pearl and Fighting Prawn, daughter and leader, respectively, of the Mollusk tribe; and, of course, the frighteningly determined Mr. Grin, the crocodile who mercilessly pursues Captain Hook. In addition, some fun new personalities are introduced: Magill and his big bear, Karl; Patrick Hunt, a historian and specialist on

Published by Thriftbooks.com User , 12 years ago
I loved, loved, loved this book! I was so excited that the authors had gone ahead and written a part 4, and it was in no way a disappointment. The adventure was uniquely different from the other books in the series, and there was lots of action and many sinister characters. Thanks for another wonderful book!

Published by Thriftbooks.com User , 12 years ago
My son and I are arguing and fighting over rights to keep on reading, and we're only on page 150. It is an excellent addition to the series and one I know we will enjoy again and again. Do yourself a favor and read all of these in order. If the length seems intimidating, the CD's read by Jim Dale are a treat not to be missed. Appropriate for 6 and up, but nothing inappropriate, only some implied scariness and bad guys. More comments when it's done....I just need to find where my son hid it!
Copyright © 2020 Thriftbooks.com Terms of Use | Privacy Policy | Do Not Sell My Personal Information | Accessibility Statement
ThriftBooks® and the ThriftBooks® logo are registered trademarks of Thrift Books Global, LLC