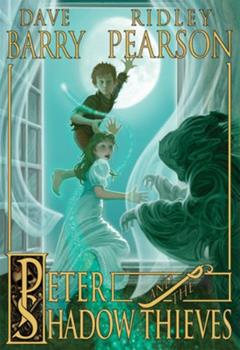 (Book #2 in the Peter and the Starcatchers Series)

Award winning authors, Dave Barry and Ridley Pearson have done it again-written a compulsively readable, impossible-to-put-down tale that will delight readers of all ages. In this riveting and adventure-packed follow-up to Peter and the Starcatchers , we discover Peter leaving the relative safety of Mollusk Island-along with his trusted companion Tinker Bell-for the cold, damp streets of London. On a difficult journey across the sea, he and Tink discover...

Published by Thriftbooks.com User , 14 years ago
"Peter and the Shadow Thieves" continues with the story of young Peter, an orphan boy whose life has completely changed when he came in contact with a powerful substance known as stardust. Now an expert flyer, Peter has become very fond of Mollusk Island and the lost boys whom have adopted him as their leader. However, things change drastically when new visitors arrive one day... some old enemies along with new, one in particular who appears to be made out of darkness and can steal shadows from any living thing, causing them to become mere shells of the persons they used to be. Of course this new enemy is looking for the stardust that was once on Mollusk Island. Once it is discovered that the stardust is in the hands of Lord Aster, they set sail for London. Peter, knowing his friend Molly and her family are in real danger, sets off to follow with his fairy Tink, not knowing whether or not he will even make it to the coast without being found out by the shadow creature. "Peter and the Shadow Thieves" does not disappoint! It continues where the first book, "Peter and the Star Catchers" left off. It is a page turner filled with action and very comical scenes, most of which involve Tink and her very blunt opinions on other characters. Though the book has almost 600 pages the chapters are short and it's easy to whiz through this thing within a few days. I highly recommend it for any Peter Pan fan out there who is looking for another adventure to read!

A great book to read *to* your children

Published by Thriftbooks.com User , 14 years ago
I started reading "Peter and the Starcatchers" to my 6 & 8 year old children earlier this summer. Our bed/nighttime reading was normally books that we could read through in one sitting or maybe over 2-3 nights. I wasn't sure they were ready for long, multi-chapter books. But, oh, were they into the book! I would even stop mid-chapter and ask if they knew what was going on or remembered what had happened previously and they did... this book captured their attention, without a doubt! Even my husband - after he read in my place when I was gone one night around chapter 10 - would come running in at story time to listen. We were so excited when "Peter and the Shadow Thieves" came out right when we finished "Peter and the Starcatchers" so that we could find out what happened to Peter Pan next. There are many chapters, some as short as a page, and every night I heard "one more chapter, PLEASE" over and over. It was easy to say yes! We are pining away for the next in the series. I've been a Dave Barry fan from his early days as a columnist and can see his quirky sense of humor surface often in these books. I'm not (yet) familiar with Ridley Pearson's work, but I've bought "The Kingdom Keepers" for my kids for Christmas and I hope that will be an interesting a read for us. My 8 year old will find "Escape from the Carnivale: A Never Land Book" under the tree in a few days and I'm confident that he will enjoy it as these books really do a great service to inspire love of reading in young and old alike. Advanced readers (maybe 6th grade reading level and up) will enjoy these books for themselves, but for younger kids, read it *to* them and they will come to love books too.

Published by Thriftbooks.com User , 15 years ago
Ever wished the cocky look was washed off Peter's face just once, even though you like him and you'd never want the cockiness completely gone? I always felt that way just a smidge while reading the original Peter Pan and found the first book in this series relieved that itch just a bit. It was like Peter Pan, only more humananized and real. And FUNNY! But on to this novel, well, Peter has a rough, rough ride and suffers greatly for his love of Molly. They are starcrossed, to be sure, and that tears at my heart a great deal. I find myself wishing things weren't as they will be . . . but alas, we know how the story ends. Half the fun is in getting there, though. This book has the great characters and plot and peril of the first, with the added interest of Peter being away from his element and forced to act within the borders of a more normal being. Great fun!! Also noteworthy, it has one of the best last lines to a book I've ever read.

Published by Thriftbooks.com User , 15 years ago
I read Peter and the Shadow Thieves by Drew Barry. A Shadow Thief called Lord Ombra came to Mollusk Island and was looking for the starstuff. He realized it wasn't there. He went to London and Peter followed their ship so he could warn Molly and her family that they were coming. Lord Ombra took the shadows of the guards of Molly's house and they became loyal to him. He captured Molly's mother Louise and tried to take Molly, but Peter saved her. Then they looked for The Return so they could warn her father. They went to the tower and Lord Ombra found them there and took a member of the Starcatchers soul, which then gave him the knowledge of where The Return was Molly and Peter escaped though. Molly and Peter figured out that The Return was at Stonehenge, they went there only to find Molly's father bringing the chest of starstuff to the middle of the circle. Lord Ombra and his followers shot Leonard Aster (Molly's father) and then Peter had to perform The Return. They were able to destroy Lord Ombra and complete The Return, also Peter cured Leonard Aster with his starstuff. The book was very exciting to read, because at one time you might think the plot was one thing then it changed to something different. This meant you had a few plots going on at once. So, you were trying to figure out the solution to plenty of different plots, which made it fun for the reader. The book's ending was very satisfying, because it did have a happy ending, but it still left problems to solve. The problem that occurred at that time was solved but it could lead on to other problems that could be faced later on. I believe that the author likes to have a lot of little plots all leading up and inside the main plot. Like in every chapter there is a new plot evolving or starting and ending. All the smaller plots fit into the main plot. I also believe this author likes to take a character that looks good in the beginning and make him worse and evil. He likes to show that there is a spark of hope only to have that spark extinguished, but then solved. Another thing is that he likes to show you the beginning of a plot, before the character sees it coming. Like he will show you the villain working on this plot or problem and it won't be until later that the other characters face it. The book was challenging and had words that you don't hear often, so it makes you wonder what they mean. I would recommend this book to anyone and everyone (except those to young to read it). Peter and the Shadow Thieves is always very exciting and right when you think the problem is solved a new plot evolves. You are always on the edge of your seat and thinking about everything happening in the book. No matter what type of books you like I think that you will enjoy this book. To read this book and contemplate the meaning you have to do a lot of thinking. It's a cliff hanger, a stumper, a thinker, and an all around great book. It does have the five parts of plot in the many plots it has. You are

The continued past of Peter Pan.

Published by Thriftbooks.com User , 15 years ago
Peter Pan is back, now a immortal youth stranded on Mollusk Island (Never Land) with his group of lost boys in tow. James, Prentiss, Thomas, and Tubby Ted are great admirers of his abilities, however the fact that they can never join in on his fun of tormenting Black Stache (whom Peter has redubbed Captain Hook) is always a point of contention. Suddenly there is a new ship that appears to stir things up, a ship captained by a certain noseless man named Nerezza, an ominous creature of darkness named Lord Ombra, and the former captain of the Never Land, Slank. They have come to find the starstuff that had previously come to the island with Peter, only to learn that it has been returned to London with Lord and Molly Aster. Peter greatly fears this Ombra, especially since his faithful companion birdwoman, Tinkerbell, is terrified of him. He worries for Molly, a dear friend of his from the previous adventure, and decides to return with the ship in secret so that he might warn Molly of this frightening creature. Things become complicated when he arrives in London. First and foremost he must find Molly's home, a feat that proves quite difficult for the orphaned boy. Also, there is a sudden wave of shadow theft in London, something that leaves a person but a mere shell of their former self. Peter suspects it is connected to Ombra, and vows to reach the Asters before he does, knowing full well that Molly very life is at stake. But can he do it in time, in a town where he has no notion of where she is, and worse is the fact that he cannot use any of his new abilities in order to find her. This continues to be a great new addition to the Peter Pan legend. I loved Peter and the Starcatchers, and this part not only continues in the same vein, but it retains all of it's drama and excitement, making this series a fast paced treat that is sure to delight readers of all ages. I adored the addition of some new characters, George Darling, for one, who is in line for Molly's affections along with Peter, Nerezza the pirate, Lord Ombra, the dark and sinister villain that makes Hook look like a meddling child, and even J.M. Barrie makes a brief appearance. Overall, this book is a definite treat and something that I believe people will treasure in years to come just as much as Barrie's original creation.
Copyright © 2020 Thriftbooks.com Terms of Use | Privacy Policy | Do Not Sell My Personal Information | Accessibility Statement
ThriftBooks® and the ThriftBooks® logo are registered trademarks of Thrift Books Global, LLC