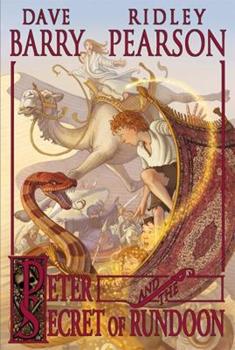 Peter and the Secret of Rundoon

(Book #3 in the Peter and the Starcatchers Series)

In this action-packed third installment in the Starcatchers series, Peter and Molly find themselves in the dangerous land of Rundoon, ruled by an evil king who enjoys watching his pet snake consume those who displease him. But that's just the beginning of problems facing our heroes, who once again find themselves pitted against the evil shadow-creature Lord Ombra in a struggle to save themselves, not to mention the planet. It's a wild desert adventure,...

Please Don't Let It Be the Last!

Published by Thriftbooks.com User , 13 years ago
Dave Barry and Ridley Pearson have reinvented Peter Pan, the Lost Boys, and Captain Hook so well that a generation from now no one might remember where J. M. Barrie's original creation ended and theirs began. So far, the two have written three incredibly fat and action-packed volumes of Peter's adventures with the "starstuff," the magical fallen stars that gave him his power and - in effect - rendered him immortal, though as a boy doomed never to grow up. Along the way, Barry and Pearson have also brought a multitude of other parts of the legend to life and to center stage. At present, they've authored two short novels on other characters in Peter's worldscape. Peter and the Secret of Rundoon finishes off the trilogy Barry and Pearson set out to write and fans of the series are already feeling the loss. The two authors succeed brilliantly in bringing their books to cinematic life within the pages. The pacing of all three books proceeds at breakneck speed. As with the other books, PETER AND THE SECRET OF RUNDOON jumps in with both feet and with three different storylines that ultimately converge in the trilogy's final battle. I love these books, and I love reading them to my son. There's just enough going on all the time - enough chases and enough mystery - that it keeps him fully engaged. And me too. They're even interesting enough for me to read by myself, then go back almost immediately and read them again to him. Lord Ombra, Peter's ultimate enemy in this book, returns and begins his machinations to bring about the end of the Starcatchers, those people responsible for keeping the "starstuff" out of the hands of bad guys. Ombra quickly links up with Captain Nerezza and the chase is on. In the meantime, Peter becomes aware of a murderous group - the Scorpion Tribe - coming to Mollusk Island - to wreak havoc on everyone there. Peter almost gets himself killed doing that and Tinker Bell has to save the day. Back in England, Molly Aster and her friends begin tracking down clues that ultimately lead them to Peter's real identity and how he came to be at the home for wayward boys. Talking about any of these plotlines too much will give away important twists and turns. Suffice to say there are plenty of surprises, and that Barry and Ridley really do justice to Barrie's creation and invented world. In a way, the authors really set up Barrie's initial novel by explaining many of the things Peter Pan fans have always wondered. If you haven't read this trilogy, you can't wander through them. The books have to be read in order. Peter's powers grow, as does the villainy of his foes. And readers are gently nudged out of the world that existed then and slid right into Neverland. If you like juvenile fantasy novels, you'll be hard-pressed to find many better, more quick to read, or more inventive than these. The world is at once familiar and wondrous. But the best time you'll ever have is sitting down with these and reading them to yo

Peter and the Secret of Rundoon

Published by Thriftbooks.com User , 14 years ago
Peter and the Secret of Rundoon (The Starcatchers) on CD is well performed by Jim Dale who also does the Harry Potter Series. It is so eye-opening to hear the unabridged spoken version of books. My applause is for the author Dave Barry as well as the reader Jim Dale.

An exciting finish to a wonderful trilogy

Published by Thriftbooks.com User , 14 years ago
The Starcathcers' trilogy comes to an action-packed conclusion in this final installment from Dave Barry and Ridley Pearson. In this installment, Peter must once again do battle against the evil Lord Ombra in order to save the world. Along with his friends Molly and George and the other Lost Boys they will do battle in order to stop Lord Ombra from completing his evil scheme. This is a terrific read. We've enjoyed all three books but this one was the best.

An awesome conclusion to an awesome series

Published by Thriftbooks.com User , 14 years ago
Peter and the Secret of Rundoon was a really great read. It ended the best trilogy I've ever read in my life, and in a way, it was disappointing to know that there were no more books coming. If you haven't read the previous two books, I suggest you go out right now and buy them. Before you start reading, make sure that you have at least five hours of free reading time. Once you begin reading, it is impossible to stop. Yes, these books are crazy addicting.... Dave Barry and Ridley Pearson just have this amazing gift to create suspense and the desire to read on. I hope that they will team up again to write a presequel to another classic! Happy readings! :)
Copyright © 2020 Thriftbooks.com Terms of Use | Privacy Policy | Do Not Sell My Personal Information | Accessibility Statement
ThriftBooks® and the ThriftBooks® logo are registered trademarks of Thrift Books Global, LLC