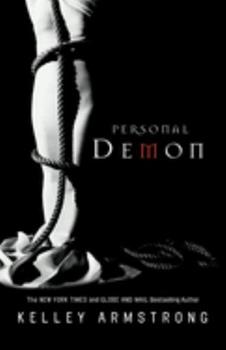 (Book #8 in the Otherworld Series)

This description may be from another edition of this product. In her acclaimed Women of the Otherworld series, Kelley Armstrong has created a scintillating realm where the supernatural and the human coexist on the edge of darkness, romance, and eternity. Now...

Another Knockout from Kelley

Published by Thriftbooks.com User , 13 years ago
Being pagan, I was iffy on reading her first book, since most authors arent very truthful about what witches really are. Well, Kelley is the BEST!!!! I am an avid fan. Personal Demon is just another knockout in her series of the women of the otherworld. I cant wait to read her next book!!!! If you love a quick read, a book that wont let you put it down, like werewolves, sorcerers, witches, demons, then this is definatly the book for you. WIth suspence, love, intregue, and curiousity, this book has it all.

4.5 star - Starts out entertaining and ends up a real page-turner. Wow!

Published by Thriftbooks.com User , 13 years ago
Personal Demon at first appears to be Hope Adam's story. Hope is the tabloid journalist and half chaos demon who first appeared in Armstrong's short "Chaotic" in the Dates From Hell anthology where Hope hooked up with werewolf jewel thief Karl Marsten and Hope also appeared in Armstrong's No Humans Involved (Women of the Otherworld, Book 7) where I was disappointed to discover that she and Karl had parted ways. While Hope does get a chance to shine on her own for part of Personal Demon and to learn more about her demon powers, she loses the spotlight to Lucas Cortez, Paige's sorcerer husband, and the unwilling heir to the Cortez Cabal who is on board to act as safety net for Hope as she goes undercover to infiltrate a gang making trouble for the Cortez Cabal in Miami. In her gang member role Hope participates in some daring robberies, which up her adrenaline and begin increasing her demon-side's taste for chaos and challenging her control. Soon Hope begins to question herself and wonders if she were in the position of choosing the chaos `kick' over doing the right thing, whether she would end up being more demon than human after all. As part of her role as 'socialite Faith joining the gang for kicks', Hope decides to put her rejection by Karl behind her by pursuing a fling with fellow gang member Jaz who is handsome and appealingly happy go lucky -- Jaz trails chaos in his wake which adds to his appeal for Hope. But just as she's getting to the point where things are starting to steam up with Jaz and where her undercover role is starting to produce results, the gang is attacked apparently by rogue members of the cabal. Jaz and fellow gang member Sonny are kidnapped and another gang member is murdered. As the situation begins to get dicey for Hope, Karl shows up to cover Hope's back and Hope and Karl finally deal with the issues that tore their relationship apart while persuing the gang's attackers. As the gang appears to be under attack by the Cabal, the Cabal also suffers a major attack and the story transitions to Lucas as he is forced to deal with the aftermath of a several connected incidents that threaten the very foundation of the Cabal. Hope's story was entertaining but Lucas' was gripping, a real page turner -- I just had to finish and find out what happened. I am sure that the events here will shake things up for Lucas and Paige permanently and it looks like Lucas will have some serious decisions to make in the future that may challenge his ethics in order to save the very institution he has spent years fighting. Personal Demons left me eagerly awaiting Living with the Dead (Women of the Otherworld, Book 9) to see what happens next to Lucas and Paige, who along with Jeremy, are my favorites in Armstrong's Women of the Otherworld series. Personal Demon is the 8th full length novel fro the Women of the Otherworld series and takes advantage of much that has come before. Lucas and Paige are introduced and developed in Dime Store

Published by Thriftbooks.com User , 13 years ago
I really love the Otherworld Series. What's not to like? Smart, funny, ballsy female protagonists with awesome powers engaging in razor sharp dialogue (and occasionally some hot and sweaty) while solving high-stakes, fast-paced mysteries in a fully-realized world. But I was getting a little worried when every subsequent book was darker and grittier than the one previous, usually involving some kind of threats or execution of sexual violence (a personal pet peeve for being an overused shorthand for 'Attention reader: This is BAD NEWS'). I guess writing her crime novels is getting that out of her system, because while this book was far from a giddy laugh riot, it felt a bit like coming up for air. The universe is still real and fascinating, the characters remain attractive and intriguing, the banter is compelling, and the ending is fraught with pants-wettingly fast action and so many unexpected twists I felt like I was visiting a new chiropractor. I admit, I found myself picking this book up somewhat grudgingly, thinking "Not another new narrator..." and wishing for more time with my favorite and recently neglected ladies, Hope won me over immediately. She's a likable character in an engaging plot. Kudos to Kelley Armstrong for another strong showing. May the Otherworld series be extended well beyond ten books. Please?

Published by Thriftbooks.com User , 13 years ago
I have been waiting for Hope story for more than a year and believe me it was worth it ! I absolutely loooove Jaz (i did secretly wish for Kelley not to use "romance protocol" and give the heroine two "real" love interest even if I love Karl.....ohhhhh well....it was not meant to be.....). My only complain (And it's not really one) is I really had trouble switching from Hope to Lucas because not only you switch protagonist but gender as well ,it would have been easier if she had gone for 3 person narration for him (but it would not have had the same impact in the story I know). A excellent addition to the series (with Bitten my favorite so far)

Great novel in the 'Women Of The Otherworld' series

Published by Thriftbooks.com User , 13 years ago
Hope Adams may seem like an ordinary tabloid reporter but she's something rather more than that, being a half-demon whose demon nature feeds on and revels in chaos. When she has to pay off a debt by carrying out a difficult and dangerous undercover mission amongst a gang of young supernaturals she jumps at the chance to prove herself, especially to Karl, her erstwhile lover. However Hope turns out to be rather good at her undercover job and infiltrates the gang deeply, soon realising that all is not well in the supernatural world. When becoming involved in murders and having to try to overcome her own attraction to the chaos of some of the gang's events she finds she has to rely on Karl as well as Lucas and his wife, people who might just see her as a young and silly girl. When the four of them start to investigate a string of murders Hope learns that things aren't always as they seem, despite her talent for seeing visions of events. The book is told mostly from the perspective of Hope but there are some chapters from the viewpoint of Lucas Cortez. I wasn't entirely sure of the reason for this as I did feel it slightly interrupted the flow of the narrative and that this alternative point of view didn't add a great deal to the story; however it was interesting to read of Lucas's difficulties reconciling his situation as heir to his Father's Cabal (a supernatural business/cult) and his personal opposition to the Cabal system that operates almost like slavery for some. Hope has appeared in previous books in this series which did mean that sometimes the reader felt like they had missed rather a lot of the plot of this book before it had started. This is particularly with regard to her relationship with Karl although their awkward discussions and embarrassment with each other following their former failed relationship were well written. The strong points of Kelley Armstrong's books are her characters, the supernatural world which they hide amongst the humans and her excellent pacing and timing. This book was always enjoyable to read, the various characters all felt very distinct and interesting and the world of the Cabals was a great setting to a story about a young woman growing up and growing into herself as well as finding someone who can understand and support her. Well worth a read, even for those who haven't read others in this series. Originally published for Curled Up With A Good Book © Helen Hancox 2008
Copyright © 2020 Thriftbooks.com Terms of Use | Privacy Policy | Do Not Sell My Personal Information | Accessibility Statement
ThriftBooks® and the ThriftBooks® logo are registered trademarks of Thrift Books Global, LLC