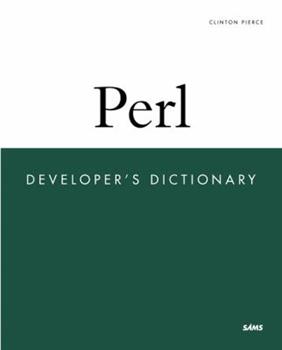 Perl Developer's Dictionary is a complete, well-organized reference to the Perl language and environment, including core syntax as well as Perl modules. Designed specifically for the experienced developer who needs a reference readily available on his or her desk to refer to on a daily basis, the book is extensively cross-referenced and indexed for optimal usability. In addition to providing a complete syntax reference for all core Perl functions,...

Published by Thriftbooks.com User , 15 years ago
Note: Based on Perl 5.6. At the time of this review, the current version is 5.8.8. 612 Pages Introduction - 1 Ch. 1: Basic Perl - 3 Ch. 2: Advanced Perl - 197 Ch. 3: Regular Expressions - 285 Ch. 4: Special Variables and Command Line Options - 327 Ch. 5: Files and Directories - 383 Ch. 6: Processes, Interprocess Communication, and Threads - 459 Ch. 7: Standard Module Library -537 Index - 591 This book surprised me. Given the title, I expected it to be a pure reference book, but what I got was a book that is also great for learning. The book is written with a great amount of clarity and the topics are covered extensively enough for the reader to learn the topics, but it is never too verbose. The examples are generally clear and to the point and are usually not too long. However, there were some disappointments in the Regular Expressions chapter. A few, just a few, regular expression examples matched expressions which I don't think that the author intended for them to match, but it's a minor complaint. The book also spends a nice amount of time on the Basic Perl section and it is nicely explained, so I think that those new to Perl will enjoy that section. However, I think that the object-oriented Perl section which comes a little bit later could have been better organized and written more clearly. The book also does a nice job at explaining more advanced topics in a way that they don't seem too "advanced" or difficult. Additionally, the Regular Expressions chapter was especially well-done despite the handful of examples that I previously mentioned. Despite its title, it's not really organized like a dictionary. However, it's still great as a reference book. Just consult the index and you'll find pretty much anything that you want. However, the section on the Standard Module Library is not comprehensive in the least. One final note: It's mostly a pure Perl book. So don't expect to learn much about related technologies including CGI (touched on, though barely). It also spends very little time (essentially none) on databases. Flawed, but handy and well-written. It doesn't cover everything that a Perl programmer would want to know, but it does an excellent job at explaining what it does cover.

For Intermediate to Advanced level users

Published by Thriftbooks.com User , 21 years ago
In addition to providing a complete syntax reference for all core Perl functions, Clinton Pierce's Perl Developer's Dictionary also provides quick access to language syntax, constructs, and other language issues for experienced developers. Each major section of the Perl Developer's Dictionary is prefaced with a short, succinct introduction to provide background material on the subject at hand, and then is followed by a series of "dictionary" entries that cover exactly one topic, carefully cross-referenced and indexed with the rest of the book. Perl Developer's Dictionary is very highly recommended for Intermediate to Advanced level users.
Trustpilot
Copyright © 2022 Thriftbooks.com Terms of Use | Privacy Policy | Do Not Sell or Share My Personal Information | Accessibility Statement
ThriftBooks® and the ThriftBooks® logo are registered trademarks of Thrift Books Global, LLC