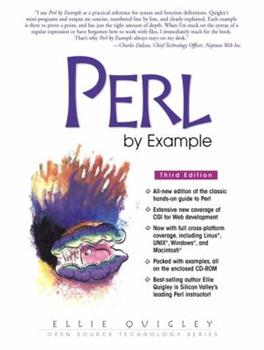 This is an excellent Perl book for beginners

Published by Thriftbooks.com User , 13 years ago
This is a very complete book if you want to learn and start to implement Perl. While Perl is not the be all/end all language, it is very much fun to use, especially in the UNIX world where you find the limitations of all the various shells limiting. Perl can get you going, and you can continue to learn more and more (such as object-oriented Perl) as you grow and evolve. But this book is really good for beginners. While the examples are simple (as they SHOULD BE in a learning environment) each example line is explained in great gory detail. None of these "Hey, look at what I can distract you with while trying to teach you this simple example" or some authors involved and crazy "Case Study"; these examples are easy to assimilate. It is up to the reader to put the concepts together to make a coherant program (and Perl is a very forgiving language, making it great for beginning programmers). When I was teaching Perl for collegiate newbies, this was my book of choice. The students would actually visualize some program, and this book would show them how the pieces worked. So the students just put them together and away they went. A lot of other Perl books fall very short in this aspect. Of the dozens of Perl books I own, this is one to read if you want to start with Perl.

Published by Thriftbooks.com User , 18 years ago
I have been learning Perl for about 2 months now, I have a little shell scripting experience but that is it. I 1st started with Learning Perl by O'Reilly. Good book but lacking on the examples, I then went to programming Perl by Larry Wall, a great book for intermediate to advanced, didn't help me much beginning Perl. I then picked up Perl by Examples 3rd edition, this book is superb, a well written programming book. I have read many Computer based books and this definately ranks top 2 in my opinion. The examples are excellent, she shows you the code, the ouput of each line, and then explains each line in every example. So if you forgot something from the 2nd chapter and it shows up in the 5th, it is explained again to you in the example, so you don't have to go through the book and find it. This is a must have for any Perl programmer.

Perl by Example by Ellie Quigley

Published by Thriftbooks.com User , 20 years ago
Ellie Quigley delivers again. Her latest version of Perl by Example has been completely updated to include the latest features of the most fun programming language in existence. The new format is even easier to read than before. Anyone programming in a Linux environment will be particularly impressed with her treatment of Linux shells. As in previous books, Quigley's examples are always short and to the point. She explains each and every line of code in her examples leaving nothing to the imagination. I've been teaching Perl at the corporate and college level for four years, and would recommend this book over all others to people who are trying to learn the language for the first time, or to those who just want a complete reference at their side. This book's a keeper!

Published by Thriftbooks.com User , 23 years ago
I've been a programmer for over 23 years (started very young) and I've programmed in Perl for about two years. Out of the 24 Perl books I own (including most of the O'Reilly books), this is one of my two favorites. The examples are excellent and there is a brief description of almost everything. I have used Perl on both UNIX and Windows NT, but am using mostly Windows NT now and this book has helped greatly just by explaining things better than Learning Perl and Programming Perl (O'Reilly). My other favorite which lists many libraries/packages is Perl Cookbook (O'Reilly).

Perfect for those who learn best by actual, clear examples

Published by Thriftbooks.com User , 24 years ago
As someone who learns best by seeing and doing rather than reading abstract theory and explanation, this book is a God-send! Each example is broken down line by line with clear explanations so you can understand exactly what each programming element does. It's the first book to really show me a tangible example of object-oriented Perl that isn't easier as a standard subroutine. This is not a cookbook, but clarifies many programming language features that the Camel book discusses on a "more elevated" plane. If you read advanced programming language code for fun and didn't get lost anywhere in the Camel book, this approach may bore you. But if you're wanting to fill in all the holes from kludging together all those scripts by Matt Wright, this is for you! Highly recommended!
Trustpilot
Copyright © 2022 Thriftbooks.com Terms of Use | Privacy Policy | Do Not Sell or Share My Personal Information | Accessibility Statement
ThriftBooks® and the ThriftBooks® logo are registered trademarks of Thrift Books Global, LLC