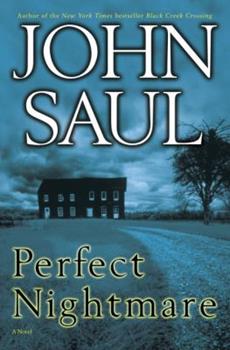 From New York Times bestselling author Saul comes a pulse-pounding tour de force centered on the search for a seemingly disconnected group of missing people--each of them entangled in the web of an obsessed madman.

Nefarious and malevolent evil makes for a chilling read

Published by Thriftbooks.com User , 15 years ago
Perfect Nightmare was my first John Saul book and it was fast, intense and extremely dark as simple words rang truth in my ears like bells and they were terrifying and depressing but made for a really good horror book. There were no super natural monsters, no vampires and witches but a soul of a man so dark and rotten that it chilled me to the bone as I read this book in two days, as it was a very fast and smooth read. I must admit that the story left me feeling down and sad because it was so real and horrifying yet I knew it was a book so I kept reading, if it was a newspaper article I don't know if I would have had the guts to continue. Kara Marshall and her husband Steve were planning on moving form the charming Long Island home to the city, where Steve worked because they couldn't afford to stay in the house and needed help with their finances. As they decided to put their home out on the market, they unknowingly invited a stranger into their house for an open house who ended up doing the worst harm a mother can imagine; he was responsible for having her only daughter, Lindsay who was a seventeen year old girl, disappear without a trace. I have never read a book so dark and twisted, as the mother's agony was so clearly written, I felt pain as I read it and I felt sick reading about the cold blooded killer who tortured and kidnapped women out of their homes and who were thought to be dead by their family members. I have been told by some people that a loss of a child is the most macabre thing a parent can suffer, and I got a major does of the end, the sadness and the finality of someone else's actions as they ended a mother's happy life and set her life in eternal shadows as her own child was being tortured and pushed to brinks of death. I got to read and feel the emptiness, the sadness, the way the mother knew her child was out there and was not coming back, that no matter what dreams she woke up from that nothing was ever going to be the same. Just as things got bad they got worse very quickly and darkness turned to inky blackness as I had no hope for any of the captured girls. This was a gloomy, morbid book, and it caught me in a surprise a few times, but I'm glad I read it, as it made me look around more at people and made sure to always keep safe. This really read so realistically that I'm still trying to shake it off, but I know its fiction and it was a good read from a solid and well known author, and I will definitely read more of his stuff. As someone else mentioned, I don't know hot Saul wrote this, as it was insane and real but I respect him as a writer, as clearly his skills were sharp, and despite the negative reviews, maybe this was too dark for some, to me this was a great read.

Published by Thriftbooks.com User , 15 years ago
I won't analyze this book to pieces, as some others did. I read for entertainment, and this one had me from the first page. I'm a huge fan of Horror Fiction, especially Saul & Koontz, and I was constantly surprised at developments. Mr. Saul is often quite brutal in his depictions of children being mistreated or victimized, but he sorta modified his expected style to create some interesting surprises. Indeed, I was surprised at many developments, and was never quite sure who the bad guy was until the final revelation. Red herrings a-plenty, I had fun, and it was a satisfying reading experience for me. I enjoyed it a lot.

Change Of Pace For Saul, But His Best In Long Time

Published by Thriftbooks.com User , 15 years ago
I was hoping when this book came out that it wouldn't follow the basic John Saul formula and thank God it doesn't. God love Saul but most of his books are like the same. I did enjoy many of his books, namely The Presence and The Homing. But he seems sometime to follow a basic formula. And it is kind of daunting that children are usually in trouble or abused is his books (not that this doesn't happen in real life). Well, anyway enough of my ranting. Perfect Nightmare is one of those books that starts off with a bang. The villian is setting a house on fire, not seeing or getting what he wanted from his latest victim. This is done in a haunting first person point of view. We then go to a family that is moving and having an open house. The novel moves slowly jumping from the family to the first point of view of the stalker. Then a girl is kidnapped after the open house. What follows is a study in grief, as the mother spins out of wack. Then we meet a father who has also lost his family who relates to the mother Kara Marshall. We also get a picture of what is happening to Lindsay Marshall. The book moves slowly back and forth again until another woman is kidnapped, then the book takes a tragic and insidious turn. Filled with many red herrings, like real estate agents and butlers and such. But the truth behind what is really happening is vintage Saul, which is where the book falls just a little short. But it will keep you guessing until the end (even though I had it figured out before then). I believe it is one of Saul's best in a long time.

Kept me reading past my recommended bedtime... :)

Published by Thriftbooks.com User , 16 years ago
John Saul is one of those authors that I enjoy reading, but for whatever reason I don't tend to pick up his latest work right away. This time I got on the library hold list early for Perfect Nightmare, and proceeded to devour it in less than 24 hours. It was a pretty good read... :) A family is putting their home on the market because the husband is spending too much time commuting into the city for his job. None of them really want to leave the house, but the parents feel it's a last attempt to save the marriage. The lone child, Lindsey, is especially upset because it will be her upcoming senior year in high school and she had a chance to be the head cheerleader. When they have an open house, Lindsey gets pretty spooked at the thought of people going through her stuff. She's convinced that someone took stuff from her room, but no one believes her. Until she disappears without a trace... The police finally believe there's an abduction (not a runaway) when a single mother also disappears after an open house event. The hard part is trying to find even a single clue to use to start tracking down the abductor... The pacing of the story was pretty fast, and you just knew there was going to be a wicked plot twist in there somewhere. Saul kept you guessing as to who the perpetrator might be, and why all the psycho-sexual fantasies were occurring. A word of caution... The novel is very, very dark, and it's not necessarily a "feel good at the end" type of story. As a entertaining psycho-thriller though, it works pretty well...
Copyright © 2020 Thriftbooks.com Terms of Use | Privacy Policy | Do Not Sell My Personal Information | Accessibility Statement
ThriftBooks® and the ThriftBooks® logo are registered trademarks of Thrift Books Global, LLC