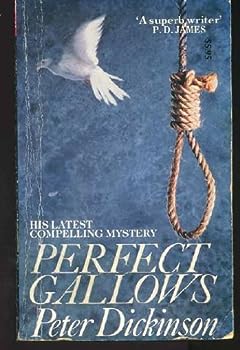 This description may be from another edition of this product. The twisted circumstances surrounding an unspeakable crime, an old man's fortune, and a production of Shakespeare's The Tempest come to light four decades on in this masterful tale of greed,...

Published by Thriftbooks.com User , 15 years ago
I wonder if the vogue for Peter Dickinson's crime novels is over, for people aren't talking about him the way they once used to. He's pretty much a back number now, isn't he? Of course he must be quite old by now, but his children's books continue to sell well. PERFECT GALLOWS, written in his prime (1988) continues to stun with its sheer power and its Henry Jamesian returns to a distant past, so that the narrative swings back and forth between today and a long-ago near forgotten wartime, when the famous actor and playwright, Adrian Waring, arrives at a guided house tour showing off a fabulous English country house now given to the National Trust. Flashbacks show us Andrew, Adrian's adolescent self, as he arrives at the domain of ancient old Sir Arnold Wragge, a rough son of a bitch who made his fortune in the diamond fields of South Africa and brought his valet, a strapping, kindly black man called Samuel, back to England to dress him and pour alcohol down his throat. Otherwise all Sir Arnold does is lord it over his two middle-aged daughters and moan about a son who disappeared in the previous war ages ago. He's an astonishing character, and Dickinson outdoes himself in pouring on the gluttony, the sheer desperation of a man once vital now facing death in the eye with a swagger. The Blitz has brought little Andrew to the country, for the Wragges are distant relations and the two sisters are kindly. He has escaped from a bitterly poor childhood on the docks but what they don't understand is, he loved it there. But what he really loves is to act, and one of the two sisters plans a production of THE TEMPEST in the ruined folly which will star Andrew--and the black servant, Samuel, will be Caliban. A local "land girl" is roped in to be Miranda, and Andrew soon realizes if he plays the part of a feeling boy, he will be able to seduce her. Pigeons coo in a tall tower overhead, which becomes the young lover's rendez-vous. Sir Arnold realizes that in young Andrew he has found a kinsman with more balls, young as he is, than any other candidate. There's a spiritual bond between them too--they are both as soulless as animals. PERFECT GALLOWS is a cat and mouse game featuring two of the most vicious, callous protagonists you have ever read about in a novel, and yet we come to care for them both, difficult as it seems. Peter Dickinson, with his powerful intellect and his marvelous gift for scene-making, shines a steady light into wartime values; showing that while England fought for its life, not all the action was in the air or on the sea. It's chilling and exemplary at once, and might be Dickinson's best.
Copyright © 2020 Thriftbooks.com Terms of Use | Privacy Policy | Do Not Sell My Personal Information | Accessibility Statement
ThriftBooks® and the ThriftBooks® logo are registered trademarks of Thrift Books Global, LLC