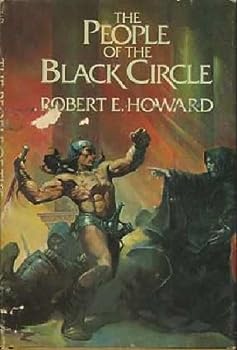 Conan: The People of the Black Circle

This description may be from another edition of this product. Conan the Cimmerian: he rose from boy-thief and mercenary to become kingof Aquilonia. Neither supernatural fiends nor demonic sorcery could oppose the barbarian warrior as he wielded his mighty sword...

Published by Thriftbooks.com User , 16 years ago
Other readers may not understand that this was written in a different era. A time when a high school diploma and meant something. Since it was written before the Great Depression for a pulp fan magazine. The language and style is from the past, but the story is powerful and fully fleshed out. I will never sell my copy of this book or of any other Robert E. Howard's works that I own. He is a classic swords and sorcery writer, with the biggest hero ever. Conan Read it as he wrote it, not as some hacks have tried to write stories of Conan. All other "Edited" or "Enhanced" versions are junk compared to how Howard wrote these stories. Don't waste your time on the other "Conan" authors. Only Robert E. Howard wrote Conan, and only his words as originally written are worth your time.

Published by Thriftbooks.com User , 19 years ago
These are not the mindless hack jobs you might have come to expect of those who have exploited Howard's legacy; these are not mere "adventure yarns with a touch of the weird", as H. P. Lovecraft described them, and they are not silly or posed, as one reviewer suggests. There is a fundamental theme running like a red thread throughout these stories, and it is this: man is an animal only weakened by civilization, and the closer one is to the natural state the more effective one is in the real world. Howard expresses this not only with his characters and situations, which are ten times more imaginative than anything you'll find in contemporary literature, but with his breathless, literate prose, which manages to be elegant and brutal at the same time. This man largely writes about the same kinds of things Hemingway wrote about, only with vastly more inspiration and originality, and it's a shame that the excuses for fantasy writers of the present and their Dungeons and Dragons-weaned fans let superior work like this languish while heaping dollars and praise on tenth-generation copies of Tolkien.

I forgot how good these are

Published by Thriftbooks.com User , 19 years ago
Wow. It didn't take much for me to slip back into the world of Robert E. Howard. I haven't read any Conan books since I was a kid (I got my first library card solely to check out Conan books!), and I picked this volume up to see if the stories held up to my memory.They are so much better than I remember them. Robert E. Howard, who I have gained new respect for, is a good writer. This edition, for the first time, is pure Howard. The books I read were the de Camp/Carter edited versions/pastiches, and I don't think that their watered-down versions ever had this much life in them. They were certainly never this addictive. The writing is these stories is vibrant and rough. Pulp writing dictated a certain style of cheap thrills and excitement, and Conan has all of this. However, the strength of craft, of use of language and story, makes these stories shine. Howard successfully created a bold fantasy world unlike any other, although it has often been copied. His liberal use of his friend H.P. Lovecraft's "outside horror" adds to the atmosphere of Hyborea. Conan is a fully-realised character, and not what you think. Like Edgar Rice Burrogh's Tarzan, he did not fare well upon transportation to other media. Intellegence and strength are his equal weapons. Conan is not the shirtless brute that many think of.I will definitely use this book as an invitation to check out more by Robert E. Howard.

The real Conan at long last :-)

Published by Thriftbooks.com User , 19 years ago
For those who don't know Robert E Howard, or his most famous character, Conan of Cimmeria, let's say that this is some of the finest Swords and Sorcery literature frome the golden age of the pulps in the thirties, an excellent blend of violent action and supernatural horror, possibly the equal of Lovecraft, though in a different vein, faster pace and a lighter touch. Conan is not necessarily REH's best creation (after all he began his existence as a rewriting of another story to make it more commercial) but most Howard fans will grant that several of these stories are true Masterworks. among those found in this volume are:Frost Giant's Daughter, Black Colossus, A Witch Shall be Born, Shadows in Zamboula and People of the Black Circle, and there are several more in volume two. I don't have the proper words to recommend warmly enough this collection fine manifestations of the storytellers art.For those who already know REH and Conan, here is the reason why this book, and his companion volume are definite must haves. This is a collection of Howard's Conan writings, with Howard and only Howard. no weak and overdone pastiche, no shoddily completed "collaborations", no tales diminished from their original value by being "conannified": That implies that some of the contents are mere fragments, but you get only the genuine article, and believe me, it's worth it.

Published by Thriftbooks.com User , 21 years ago
If you can find this book, and you're a fan of high fantasy I highly reccomend you check it out. Along with J.R.R. Tolkien and Jack Vance, Howard revolutionized the sword and sorcery genre. All though this collection of short stories is a little formulaic, it's brought to life with Howard's amazing descriptions of the horrors and wonders of a time past.
Copyright © 2020 Thriftbooks.com Terms of Use | Privacy Policy | Do Not Sell My Personal Information | Accessibility Statement
ThriftBooks® and the ThriftBooks® logo are registered trademarks of Thrift Books Global, LLC