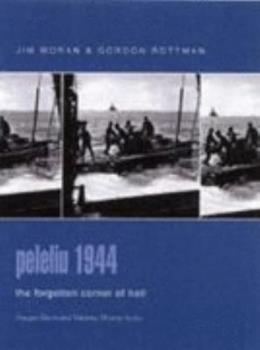 (Book #110 in the Osprey Campaign Series)

Equaling Tarawa and Okinawa in scale and ferocity, until recently the battle for Peleliu has been regarded as the Pacific war's forgotten battle, and sadly one that should never have been fought. A massive carrier-based attack some weeks before the invasion destroyed all aircraft and shipping in the area and virtually isolated the Japanese garrison. 1st Marine Division commander, General Rupertus, made extravagant claims that the capture of Peleliu...

Published by Thriftbooks.com User , 11 years ago
Bought his book for my Dad, who was on Peleileu in WWII, in the Army driving Amphibs. He was very pleased with the book, and highly recommends it.

A Good Summary of an Unnecessary Battle

Published by Thriftbooks.com User , 12 years ago
The introduction gives excellent coverage of the islands with regards to terrain, size and proximity to the other islands in the invasion plan. It also gives a brief history of the Allies accomplishments of the last two years. Nimitz, moving west, captures Gilberts, Marshalls, Marianas as well as neutralizing a number of other islands. MacArthur, driving north, liberates the Solomons, New Britain, New Guinea and was now setting his sights on the Philippines and wouldn't let anybody stand in his way of fulfilling a promise, regardless of cost. MacArthur would not listen to reason that neutraling Palau Islands would be sufficient. He wanted the Peleliu garrison and airfield destroyed and he had the clout with FDR to override Halsey's or Nimitz's opposing view. The author also reminds the reader that the friction between USMC and Army which started on Saipan was still an issue going into Operation Stalemate. Even though the Chronology covers the period from late 1941 to 1954, I found it disappointing for the coverage during the campaign was most rudimentary and could have been more exacting. The authors devote 24 pages, which is above average for this series, to the next three chapters: Opposing Plans, Commanders and Forces. On the US side, the Marines and Army are well covered including an Order of Battle while the Japanese received less space but it was adequate and included pictures of key commanders and a description of their revised "Absolute National Defense Zone" strategy which Palau was a part of. A special comment on MajGen Rupertus of USMC and commander of 1st MarDiv. He had just recently broken his ankle and should have been relieved of this battle. He should have been replaced for two more important reasons. He had been making audacious statements that his Marines would take Peleliu in two or three days and he pushed his men beyond limits in order to condone his bragging. The other reason is that he mistrusted the Army and wasn't going to allow the 81st ID to support the marines, regardless of the consequences. The authors spend 49 pages on the assault, six pages of which devoted to the assault on Umurbrogol Pocket, the toughest area on the island. It was well done and the accompanying 3-D map help depict the narrative. Reading Halsey's remarks about bypassing Peleliu rekindles a pet theory of mine. Instead of invading the islands we did during the war, we captured only Wake, Marcus, Iwo Jima and Okinawa and allowed our sub and surface fleet neutralize airfields and shipping, allowing these islands to whither like grapes on a vine. It seems feasible to me and it would have saved thousands of casualties and it would have allowed more men to be sent to the European threater where they were definitely needed by the last half of 1944. There were six 2-D maps and three 3-D maps and they were all excellent as were the photos. A good reading list was provided as well; I would add "Brotherhood of Heros" by Bill Sloan. Except for the Chronology

Published by Thriftbooks.com User , 12 years ago
Excellent rendition of the battle of Peleliu...WWII...the Marine's bloodiest battle to date...I learned a lot of what my dad went through in that battle!

Published by Thriftbooks.com User , 13 years ago
This book follows the best traditions of the Osprey Campaign Series and it is probably the best short account of the terrific but largely forgotten battle of Peleliu. The maps are excellent and clarify every detail, the orders of battle are top notch and the story is very well told, albeit without many first hand accounts, due to restricted space. A nice addition to any library about the Pacific War.

Another Fine Addition to the Campaign Series

Published by Thriftbooks.com User , 18 years ago
Peleliu 1944, Osprey Campaign volume number 110, covers one of the more obscure but controversial battles of the Pacific War. Jim Moran and Gordon L. Rottman, two authors well versed in US Marine Corps history, have done a fine job synthesizing the available secondary sources on the battle into a succinct campaign narrative. A detailed, blow-by-blow campaign narrative, combined with excellent maps and photographs, makes Peleliu 1944 a fine addition to the Osprey Campaign series. The authors succeed in laying out the two most enduring questions about the battle: was the invasion of Peleliu necessary and why was it so costly? In standard Osprey Campaign series format, Peleliu 1944 begins with short sections on the origins of the campaign, a chronology, and sections on opposing plans, commanders and forces. The campaign narrative itself is 48 pages long, followed by a brief aftermath section, comments on the battlefield today and a bibliography. There are a total of three "Birds-Eye View" 3-D maps (D-Day on Peleliu, Securing the North of Peleliu and the Reduction of the Umurbrogol Pocket), six 2-D maps (Strategic situation, the Palau Islands, Peleliu Island, D-Day to D+8, Capture of Angaur Island and the Umurbrogol Mountains), and three battle scenes (Beach Orange on D-Day, the Japanese tank counterattack and Reducing the Umurbrogol Pocket). The authors also provide very detailed orders of battle for the 1st Marine Division, the US Army 81st Infantry Division and the Japanese forces on Peleliu. The controversy about Peleliu began even before the invasion. Admiral Halsey wanted to neutralize the island by bombardment and then bypass it, as so many other islands had been bypassed. However, Admiral Nimitz disregarded this suggestion and ordered the invasion to proceed in order to remove a potential threat to General Macarthur's imminent invasion of the Philippines. The authors clearly point out that most of the Japanese aircraft and naval vessels in the Palau Island group had been destroyed by US air raids well before the invasion. Thus, the threat to Macarthur was minimal. Securing Peleliu provided the US Navy with a convenient but not critical base (although it did help to rescue the survivors of the sunken USS Indianapolis in 1945). Thus the question really devolves to whether or not the invasion was worth the cost, since it was clearly not critical to winning the war in the Pacific. On the conduct of the battle itself, Moran and Rottman clearly place the blame for the heavy US casualties on two causes: inadequate intelligence preparation of the battlefield (IPB) and incompetent senior leadership. In modern parlance, IPB focuses on gaining information about the terrain, weather and enemy that will enable the friendly commander to make the best possible decisions. However, the US Marines landing on Peleliu were continuously presented with unpleasant surprises about the terrain, weather and enemy. Instead of the "mostly low and flat
Copyright © 2020 Thriftbooks.com Terms of Use | Privacy Policy | Do Not Sell My Personal Information | Accessibility Statement
ThriftBooks® and the ThriftBooks® logo are registered trademarks of Thrift Books Global, LLC