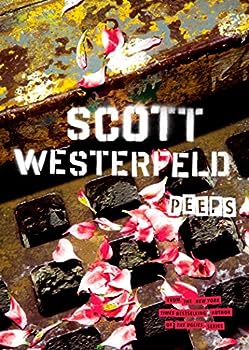 This description may be from another edition of this product. Cal Thompson is a carrier of a parasite that causes vampirism, and must hunt down all of the girlfriends he has unknowingly infected before they can create even more of their kind

Published by Thriftbooks.com User , 15 years ago
This is labelled as YA, but don't let that put you off. An elegantly-sfnal sort-of vampire story, interleaved with really cool True Stories of biological parasites. It's also a teenage coming-of-age story, set in New York, and a romance that must overcome an unusual obstacle [1]. Very smoothly written. A winner! I can't resist quoting from the appendix: "Don't Swim in Tropical Rivers! ...if you must swim in tropical rivers, for heaven's sake, don't pee! Your urine will attract a spiny creature called a candiru, which swims furiously towars any urine it smells, and will lodge in your.... Well, where it lodges depends on whether you're male or female, but either way, you don't want it lodging there." [1] No, it's not that Lace, the protag's otherwise-charming love-interest, finds it impossible to speak three consecutive sentences without saying "dude". Though that does get pretty damn annoying. Happy reading-- Peter D. Tillman

Smart, geeky, not for the squeamish (or evolution deniers)

Published by Thriftbooks.com User , 15 years ago
Scott Westerfeld is someone I'd like to be sitting next to on a cross-country flight. He's a hardcore science and techno geek with a great imagination and a gift for really witty invented nomenclature. I read Uglies first, and was impressed by how richly and logically imagined his future world was, and then gobbled up Peeps in a couple of hours. Its retelling of the vampire legend as essentially a medical mystery (a la CSI, which gets a reference in the book) benefits greatly from the voice of its narrator, Cal, whose colloquial and conversational tone hooked me and connected me personally to the story. I will not recommend this book to my 12-year-old daughter, who is currently reading Uglies; it's too gross, a little too sexy (nothing explicit happens, but the atmosphere is frantically hormonal), and maybe too scary in places. I would absolutely recommend it to older adolescents who are up for an intellectual challenge packaged in a terrific adventure story, and to adults as well. Note to evolution deniers: the author goes into considerable detail about why he never wants to hear the words "it's only a theory" again. If that will offend you, this is not your book.

Guaranteed to make you squirm

Published by Thriftbooks.com User , 15 years ago
This YA book was head and shoulders above the adult novels I've read in the last six months. Well-written, creepy as all get-out, it had well-defined characters, an entertaining plot, and even a bit of 'stealth science'. The best part was the way in which vampirism was addressed as a parasitical infestation. Every symptom, from photosensitivity to cruciphobia, was discussed in terms that were not only internally consistent, but perfectly plausible. The title, "Peeps", refers to a shorthand designation for the vampires - as in "Parasite-Positive". The narrator, Cal, is also infested - he's a carrier, capable of infecting others, but not suffering the more dire effects of the infestation (i.e., the blood-drinking and cannibalism). He's recruited to join the Night Watch, an ancient organization that monitors and controls outbreaks of Echinococcus cannibalis -- the organism which causes vampirism -- to act as a vampire hunter, tracking and capturing others who don't have his lucky immunity. In the process, he learns that vampires aren't the only things that go bump in the night. Highly recommended for teens and adults alike (middle-schoolers may also enjoy this, but parents should be aware that there are references to sex and "being horny" that may require some discussion, and there are numerous discussions of real parasites that may cause uneasiness.)

Published by Thriftbooks.com User , 16 years ago
Grades 9-12, Ha! I'm 7th grade, and this book was still awesome. I'm not totally average though, and this kinda freaked out some of my friends. Never the less, this book demands to be read, and is almost imposible to put down.

Fascinating and full of adventure, but not for the faint of heart or stomach

Published by Thriftbooks.com User , 16 years ago
First rule: Don't call them vampires. That's just a ridiculous term. The proper label is parasite-positives, or "peeps." Maybe some people think that peeps have a few things in common with vampires of legend, but New York City is a long way from the Carpathian Mountains. Second rule: Whatever you do, don't forget the anathema, when peeps start hating the things they used to love. The anathema hurts, but in a good way. These rules to live by are a part of Cal Thompson's daily life. Cal is a peep hunter, sworn to protect New York from the spread of the parasite that, well, makes people act like vampires, if you have to use that word. Cal himself was infected with the parasite, but on him it works differently. He has the superpowers and the urge to feed, but he can still live among those who don't carry the parasite. In a quest to track down the woman who gave him the parasite, he peels away the layers of a mystery involving rats, cats, writing on a wall, and a building with more than a health club in its basement. Be forewarned: PEEPS is neither for the faint of heart nor for the faint of stomach. But if descriptions of parasites and some truly disgusting life forms under New York City are what you live for, then pick up this book immediately. Westerfeld provides a fascinating, high-adventure look at the lives of parasites and ties it into a gritty urban fantasy with plot twists around every corner. --- Reviewed by Carlie Webber
Copyright © 2020 Thriftbooks.com Terms of Use | Privacy Policy | Do Not Sell My Personal Information | Accessibility Statement
ThriftBooks® and the ThriftBooks® logo are registered trademarks of Thrift Books Global, LLC