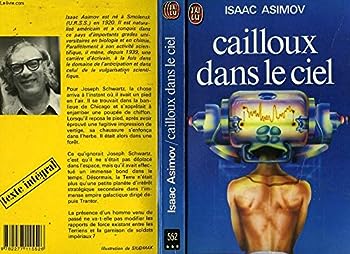 Pebble in the Sky

This description may be from another edition of this product. The third and final book in the Galactic Empire series, the spectacular precursor to the classic Foundation series, by one of history's most influential writers of science fiction, Isaac Asimov After...

Published by Thriftbooks.com User , 19 years ago
Pebble In The Sky is probably the reigning titleholder of "Undiscovered Classic" in Isaac Asimov's impressive lexicon. It may take a little searching to locate this book, but believe me, it's well worth it. Dr. Asimov constructed a huge universe that traces humanity from the near future (the Robot stories) to its first creaking footsteps into the unknown (the Robot novels), to the founding of a Galactic Empire (the Empire novels), and finally to the ultimate destination of mankind (the Foundation novels), although this was not his original intention - the Robot universe and Empire/Foundation universe were knotted together by later books. Anyway, of these four categories, the Empire novels are easiest the weakest. This is partly because it is very early Asimov (but Foundation and I, Robot, both classics, are equally early), and partly because the idea behind it all maybe isn't as inspired as the others.However, Pebble in the Sky is a true work of literary genius. It is set on Earth in the year 827 of the Galactic Era. A man called Joseph Schwarz is found by a farming family, who find that he cannot communicate. They take him to a doctor at the city of Chica, Dr. Shekt, who uses his new Synapsifier to increase intelligence. Soon, they discover that Schwarz is in fact from the year 1949 AD, an era thousands of years back. Schwarz is equally amazed to find himself thousands of years in the future. And what a future he finds waiting for him...I will not give any further information because it may well spoil the plot for you. It is a well-written enjoyable book. It showcases Dr. Asimov's incredible ability to render cultures, as his portrayal of Earth is one of the most haunting things I have ever seen. It is only a shame that he never wrote later Empire novels (maybe team Schwarz and R. Daneel Olivaw together!) to add to this forgotten chapter in his works. Finally, a quick word about the contradictions. This work was written in 1949 and published in 1950, and so Dr. Asimov's knowledge of nuclear physics was a little rudimentary, as was anyone else's. Only four years removed from Hiroshima and Nagasaki, the idea of a fullscale nuclear war seemed a very real possibility, and this was the reason that the Earth was radioactive. However, when Asimov wrote a later book entitled Robots And Empire, he realized that this was impossible and devised a more scientific solution. Everyone's belief in the story that it is because of a nuclear war can be put down to folklore - after all, the book does seem to say that much of our knowledge has been forgotten.Read Pebble In The Sky and enjoy it as the classic that it truly is. You won't be disappointed.5 out of 5 stars.

Published by Thriftbooks.com User , 19 years ago
I bought pebble in the sky at a yard sale,I didn't even know who Isaac Asimov was.The book was fantastic and I became an instant Asimov fan.I was just wondering if any other Asimov fans out there could tell me if there's any benefit to reading his books in a certain order and if so which ones. thank you.

Earth in the Empire

Published by Thriftbooks.com User , 20 years ago
In this novel, a great deal depends upon a science fiction element not used very often by Asimov: time travel. A strange accident transports an innocent middle-aged man thousands of years into Earth's future from his native mid-twentieth century. Earth is much-changed in this future, as a poisoned backwater world of no importance in the Galactic Empire. The citizens of this Empire not even aware that Earth was the original home of humanity, despite that very assertion by Earth's inhabitants. An archaeologist seeks to end this dispute by visiting Earth to find proof one way or another about Earth's place in humankind's past. And he happens to be visiting shortly after the arrival of our hapless 20th century American. But things are not to be that easy.This novel details the efforts of the archaeologist to solve the mystery, the travails of an unintentional time traveler adjusting to his fate, and the others they encounter. Asimov also uses a plot element to be found in both the Robot Novels and the Foundation Novels: Psionics, obviously a favorite concept of his. The storyline becomes entangled with the politicians of Earth and their feelings toward the Empire as a whole, especially their rancor at being despised by the Empire. Unlike the previous two Empire Novels, this story does not read as a mystery. Rather this novel is more an adventure in the future, with some romantic elements thrown in. Among the three Empire Novels, this is my favorite. The story may start a bit slow, but once it picks up it does not slow down until the conclusion, where Asimov pretty much sums it up as one might see coming. There was not really anything difficult to anticipate, but the concepts are wonderfully applied. I recommend this book even if you have not read any of the other Empire Novels, as you will really not miss out on anything.

Published by Thriftbooks.com User , 21 years ago
I give this book 5 stars because it is classic Asimov. However, there are points in this book that are inconsistent with Asimov's later novels. For example, in Robots and Empire the Earth's radioactivity was caused by Dr. Amadiro and Mandamus at Three-Mile Island. However, in the Empire novels, the Earth's radioactivity is caused by nuclear wars. Also, the timeline seems a bit confused. The Empire novels are supposed to take place before the Foundation novels. However, here, Asimov says they are 50,000 years into our future. Yet, in Foundation, I believe it was more like 20,000 years into the future. So, this is a great novel, but it does not seem to truly fit into Asimov's later Foundation and Robot novels (they are supposed to).
Copyright © 2020 Thriftbooks.com Terms of Use | Privacy Policy | Do Not Sell My Personal Information | Accessibility Statement
ThriftBooks® and the ThriftBooks® logo are registered trademarks of Thrift Books Global, LLC