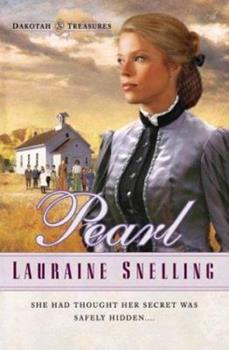 (Book #2 in the Dakotah Treasures Series)

Ruby plays matchmaker between the lovely but hidden Pearl and the carpenter Soren, who longs to uncover the beauty in Pearl that seems to be damaged by a tragic childhood.

Published by Thriftbooks.com User , 15 years ago
The series was excellent and I have placed them in our church library for others to enjy. Thanks for offering books at such wonderful prices. I received the books faster than I thought possible. Rating is 5 stars

Published by Thriftbooks.com User , 16 years ago
Pearl is a Chicago-born heiress whose father inexplicably begins a campaign to marry her off to a man she doesn't like. To escape her father, Pearl goes out west to teach in a frontier town, encountering characters from the previous novel. While I enjoyed Pearl, I admit I wanted to read more about her and a little less about Ruby and Opal, and *Gasp* Rand. Unfortunately the author divides this book into several different narratives each from a different character's point of view. Also, we still must endure the Rand/Ruby romance in this book, which I find rather generic and boring. There were two things I didn't care for in the book. One, it was a tad preachy. I realize this is Inspirational fiction, but its quite easy to show the characters acting Christian without having God talk to the characters on a regular basis. Secondly, I didn't like how the author treated the attempted rape of Ruby by Jed Black, and Ruby's agonizing about whether she 'truly forgives' him or not. Please sister. The man tried to rape you. Why do you still have him hanging around the hotel? While I can appreciate the Bible's message on forgiving those who trespass against you, that doesn't mean you have to allow people who assault you put you in danger again. At the very least, Jed Black should've been thrown out of town and his crime made public so other women could be wary- Not telling the other women of the household that the guy tried to rape her, is doing a disservice to her employees, but especially her little sister. Sorry, forgiveness is nice, but being safe is more important, and people who try to rape, usually do it again. Drinking or no. Overall, a great book, except for the Jed Black subplot. I particularly liked Pearl and Karl. A+++

Published by Thriftbooks.com User , 17 years ago
This series is fantastic!! The people and places are well defined and easily imagined. This is an inspiring and hopeful series. I loved this book.

I can't wait for the next one

Published by Thriftbooks.com User , 17 years ago
I just finished "Pearl" last night and absolutely can't wait until January for "Opal" to be released. I certainly hope that there are more to follow. The characters are so well defined in theses books that I feel like I know them and have a stake in their outcome. I just want to know what happens next!

Published by Thriftbooks.com User , 18 years ago
I love the way Snelling chooses a setting, makes it vivid enough so that we practically taste the dust on the road, then gives us unforgettable characters who intersect at that point.Pearl's story starts in Chicago. Her once-loving father-- now distant and manipulative-- promotes the most unsuitable suitor. Pearl makes plans to escape. This once-pamered daughter of a wealthy industrialist ends up taking the humble position of schoolmarm in Medora, bringing her into the world of Ruby and Opal.And what comes of all this? Lots of romance, lots of trouble and a page-turning story.
Trustpilot
Copyright © 2022 Thriftbooks.com Terms of Use | Privacy Policy | Do Not Sell or Share My Personal Information | Accessibility Statement
ThriftBooks® and the ThriftBooks® logo are registered trademarks of Thrift Books Global, LLC