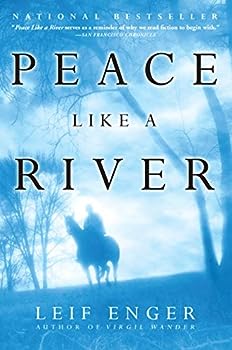 This description may be from another edition of this product. Young Reuben Land has little doubt that miracles happen all around us, suspecting that his own father is touched by God. When his older brother flees a controversial murder charge, Reuben, along with...

Published by Kristin , 1 year ago
Beautiful story, beautifully written. I have deep affection for the characters and didn’t want the story to end.

Published by Elaine , 1 year ago
Just not a very interesting book. Having a very difficult time getting past page 30.

One of the best books I have read

Published by Marisa , 2 years ago
Peace like a River is almost poetic. The story brings you on a spiritual journey like no other. This book transports you to another time and place and you never want to leave. You will literally sigh with contentment at the last word. If you like this book read Ordinary Grace it has a similar tone and until this book was my ultimate favorite book.

Published by Thriftbooks.com User , 19 years ago
I almost want to tell Leif Enger to just stop with what he's got. The lyrical writing, the exciting yet calm plot, I just don't see how you can get any better than *Peace Like a River.* This was one of the most enjoyable novels I've read so far this year.Jeremiah Land, a faithful and sometimes miraculous man, is raising his three children alone in Roofing, Minnesota in the early 1960's when a couple of rabble rousers make the Land family a target for violence. Davy, the eldest brother, takes up arms, and ends up in jail, while Reuben and Swede decide they'll do anything to protect Davy from prosecution. When Davy escapes prison and heads for the Dakota hills, Jeremiah, Reuben, and Swede take off after him. Readers can only hope and pray for a happy reunion of the family.Readers will be hard-pressed to not find a character they can identify with or believe in. I highly recommend this novel, and also try *Plainsong* by Kent Haruf. The tones are very similar.

He's Got a Whole World in His Hand

Published by Thriftbooks.com User , 19 years ago
Within a few paragraphs of begining Leif Enger's "Peace Like a River", I had to stop and smile and turn the book over to read Frank McCourt's("Angela's Ashes")comments on the back one more time. I looked again at the cover and title that had drawn me to the book for a quick read of the jacket and then back a second time to buy it. I thought of the world I had just entered through the hand of Mr. Enger and Reuben, his self-effacing and often winded eleven year old narrator. I reread some lines that set the place and time as rural Minnesota in the 1950's and I thought of the father, Jerimiah, whose plain as cotton faith is the engine of the Land family's journey. The misfortune and drama that tracks their wifeless, motherless world was compelling and vivid, like Ruben's writing prodigy sister Swede's Old West poetry. I flat-out love this book and it's "To Kill A Monkingbird"-like simplicity and power. I've sung a few old hymns in the style and substance I think Leif Enger would appreciate. In a way, reading his story was like that - comforting and profound with familiar themes masterfully played. "Peace Like A River" has, in one reading, become my most admired work of fiction, and easily one of the ten best books I've read. Ever.

Published by Thriftbooks.com User , 19 years ago
I've had to re-write this review three times because the first drafts made me sound like a gushing, blushing school girl. That's how enamored of this novel I am. Leif Enger's "Peace Like A River" is the story of the Land family set in the early 1960's in rural Minnesota: Jeremiah the father, Davy the eldest son, Reuben, 11 yrs old and the novel's narrator, and Swede, daughter and sister, verse writer and an "Old West" afficianado. The story itself is simple: Davy kills two young men who have broken into the Land home, is put on trial for murder and escapes jail when it seems he is to be convicted. Obviously this turns the Land Family upside down and the bulk of the novel is concerned with finding Davy and forging, through necessity, a new life for all. The novel begins with the birth of Reuben, who appears stillborn until Jeremiah enters the operating room: "As mother cried out. Dad turned back to me, a clay child wrapped in a canvas coat, and said in a normal voice, "Reuben Land, in the name of the living God I am telling you to breathe." And so begins the first of the "miracles" which occur throughout this novel. And no, this is not a religious novel per se though faith is very important to the Land family, Jeremiah is particular. And Leif Enger is not only concerned with the hereafter, he's also very aware of the here and now. I've never read a novel that mentions, explains, makes reference to such a disparate set of characters: Teddy Roosevelt, God, Jesus, Butch Cassidy, Robert Louis Stevenson, Bob and Cole Younger, Jesse James,Swanson chicken-in-a-can, "Moby Dick," Lewis and Clark, Moses, Natty Bumppo, Jonah ("...such a griper. Whine all day. Probably God sent the whale so He could get three days of peace and quiet."). And much more. Enger, obviously bursting with knowledge, makes these references out of a need and a love to inform and in the process inbues his characters with these same qualities ( As a contrast,in "American Psycho," Bret Easton Ellis makes ten times as many cultural references than does Enger but the effect is showy,coy and ultimately boring). There is also great Love and caring in "Peace Like a River." The Land's truly love each other with the kind of love that accepts, forgives and annoints themselves and each other as in holy communion."Peace Like A River" is energetic, magical and beautifully written in a style that can only be called gorgeous: "Was there ever a place you loved to go--your grandma's house, where you were a favorite child...and you arrived once as she lay in sickness? Remember how the light seemed wrong, and the adults off-key and the ambient and persistent joy you'd grown to expect in that place was gone, slipped off as the ghost slips the body?" "Peace like a River" can now take it's place among the pantheon of similar-themed novels: Barry Udall's "The Miracle Life of Edgar Mint," J.D. Salinger's "Catcher in the Rye" and Frank McCourt's "Angela's Ashes." Pretty good company...if you ask me.

Published by Thriftbooks.com User , 19 years ago
What a joyful, powerful and well-told tale! This book is so well written, it seems to flow like a river. I enjoyed the calmness of the way the story was told. Since it was related by a grown Ruben about childhood events, we feel the loving way the story unfolds. The chapter near the end "Be Jubilant, My Feet" is one of the most beautifully written pieces about a journey into the mystic that I have read. I particularly enjoyed the certain calmness of Jeremiah's faith that anchors the story and characters. This made the story real for me: the way faith doesn't keep you from hardship, but sees you through it. My only quibble is about what isn't in the book -- what kind of mother would leave her children to marry a posh doctor and not return when they are otherwise orphaned? I loved the sense of journey in this book, that life is a path peopled by wonderful folks like sister Swede and Roxana. I believed the minor characters such as the bullies whose demise ignite the action, Mr. Lurvy the mooching salesman and Mr. Holgren the pompous principal. Each of these are perfect small town portraits. The sense of place in the Dakota badlands transports you there. "Peace Like a River" is truly a special book, one you will not want to miss.
Copyright © 2020 Thriftbooks.com Terms of Use | Privacy Policy | Do Not Sell My Personal Information | Accessibility Statement
ThriftBooks® and the ThriftBooks® logo are registered trademarks of Thrift Books Global, LLC