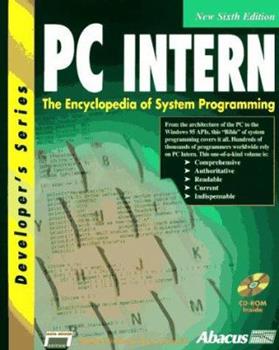 by Michael Tischer and Bruno Jennrich

This description may be from another edition of this product. Already used by 600,000 programmers in its previous editions, this encyclopedia presents up-to-date technical information on virtually every aspect of the PC--from its architecture and make-up to its...

Published by Thriftbooks.com User , 22 years ago
We used this book in a systems programming class I had at IIT in Chicago. It is not the end all "bible of PC", but it is certainly a very, very good book. Much of the information you will never use, but there will come a time when you will need that one sub-routine that no one else can find or understands, and you pull a code snippet out of this book, apply it to your code, and appear "god-like" to your colleagues. This has happend at least five times since I've owned both editions, and for that, the book has paid for itself. If you write code that goes beyond what the component libraries in your prgramming environment can provide, such as multimedia, games, or networking, it would be a wise investment to have this book in your arsenal. David C. Freeman

Published by Thriftbooks.com User , 23 years ago
Well, what to say about this book ? On one hand, it has really good examples for system programming. On the other hand, you sometimes should ask yourself: "Man, this is a good code and it works well...but, what is the use for myself?" What I want to say, is that you often learn good tricks but you will never need them. Sometimes there are also things, which are very difficult, but not very well explained and you need another book to understand it completely. But at least the biggest part of this book is very useful, and every ambitious DOS coder should own it...unfortunately, the later books of this series also contain Windows-programming...Windows and System-programming....hmmm. (Sorry for my bad English, I'm from Germany)

Even with the flaws a good book for a programmers library.

Published by Thriftbooks.com User , 24 years ago
I tend to agree with adrian2's comments. Abacus books, in general, often have flaws. Many exist in their Atari ST documentation, still this book contains many things the expanding programmer will need to know to do more than just use existing library routines found in their language. The code and documentation will help you do lots of fancy tricks in DOS. The 1992 version has lots of Quick BASIC code and if you program in Quick or Power BASIC you might want to find the 1992 edition. There is also THE DOS PROGRAMMER'S REFERENCE by Jamsa, which has less Quick BASIC code, but is also an excellent book. Both should be in any serious DOS programmers libraries.
Copyright © 2020 Thriftbooks.com Terms of Use | Privacy Policy | Do Not Sell My Personal Information | Accessibility Statement
ThriftBooks® and the ThriftBooks® logo are registered trademarks of Thrift Books Global, LLC