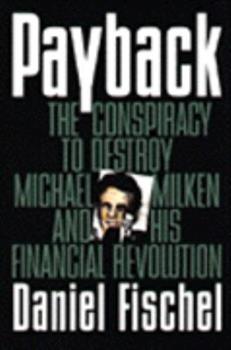 Payback: The Conspiracy to Destroy Michael Milken and His Financial Revolution

A law professor and economist charges that Michael Milkin, Drexel Burnham, and other Wall Street wheeler-dealers, whose strategies actually helped to reform the market, were wrongfully prosecuted by a... This description may be from another edition of this product.

Published by Thriftbooks.com User , 14 years ago
I found this book to be very informative on the rise and fall of Michael Milken as well as on the general regulatory responses to the various financial "crises" of the 1980's. First of all, the author is a professor of law and business at the University of Chicago who is very sympathetic to laissez-faire economics. Although the writing can be a little repetitive and overly detailed at times, I, as a graduate student of engineering, still found the style of writing very enjoyable. If you know a little bit about free market economics and a little bit about investing then you should find this book very accessible. Second of all, this book offers a compelling defense of Michael Milken. If only Daniel Fischel was his defense attorney! Fischel persuasively argue that the charges against Michael Milken were incredibly vague and the laws used were highly subjective. Furthermore, the author also argues how there was a lot of national sentiment to vilify a Wall Street tycoon, such as Michael Milken, in response to the recent market downturn. Unfortunately, instead of viewing sudden declines in market prices as a consequence of overvalued securities, many individuals find it much more emotionally satisfying to blame a successful stock speculator for their losses, regardless of if the stock trader actually did anything wrong. Further still, Fischel reveals how truly productive Michael Milken was. Milken greatly expanded the use of high-yield (viciously called "junk") bonds in corporate finance and mergers and acquisitions, which in turn revolutionized corporate restructuring. Book is of great relevance today. From reading this book, you will learn of the emotionally-driven demands for the Federal government to respond to dips in the financial market. In response to the Savings and Loans crisis, Congress passed the Financial Institutions Reform Recovery and Enforcement Act of 1989 (FIRREA), which essentially created a government-backed oligopoly of bond credit agencies (i.e., S & P, Moody's and Fitch.) Note that these are the very same ratings agencies who are currently being blamed for the subprime housing crisis today. This book is also of great relevance for the 2008 presidential primaries. First, Senator Barack Obama is calling for "21st century regulations" of stock speculators. Reading the regulatory responses in this book offers a very recent parallel to today's debate. Second, you will read about Senator John McCain's membership in the "Keating Five", a group of five legislators accused of improperly aiding Charles Keating, the colorful chairman of a failed Savings and Loan. The most chilling chapter is the one that focuses on Rudy Giuliani as the relentless prosecutor of Michael Milken. Rudy Giuliani is portrayed as a ruthless attorney who will stop at nothing to incriminate speculators accused of insider trading. Specifically, you will learn about how Giuliani was the first to use the RICO Act, a federal law originally used to prosecute orga

Published by Thriftbooks.com User , 22 years ago
Payback - the conspiracy to destroy Michael Milken and his financial revolution is an outstanding book that changes your way of thinking about the american dream, the junk bond decade and I recommend it unconditionally to anyone who is willing to have a lot of conventional wisdom and preconceived ideas turned around.The author starts with a strange question - is there something like too much wealth ? Is it embarassing to earn too much money in a short period of time. Is there something like if you are born like this you must utmost become that ?This book is a story about a man who I believe was on the way to become the most important financial thinker in our 20th century, a man whou should be seen as a scholar more than as a businessman, in particular because he prooved what scholars before him erected as a hypothesis.His crime: working unnormally long hours, thinking the impossible paths of financing, not considering the estalished rights of normal banks (which would after him cease to exist) and not bending over to the politicians who turned an industry, that should have been killed in the early 80s into a nightmare of dimensions never heard of before. Milken just helped to open ways to a new wave of shareholder- value-oriented management, and he helped to get the best result out of the S & L legislation, in principle just the way the politicians wanted it - only that they wanted to reverse everything after they had seen what had gone completely wrong,much too late at a much too high cost.I admit I have always liked Mr Michael Milken, already in the late 80s, when he was convicted, beacause the accusations seemed not plausible. This book shows, that he was sentenced to 3 years in prison (not 10 as one so often reads) for a crime that n-o-b-o-d-y can commit, because it is not a crime. It was just an accusation and a judge who lost control over the PR-work of a selfish State attorney Ralph Guliani. I admit that since reading the book I also admire Mr Milken for his proof, what a man, his wife and chidren can endure. Read this book just to show reverence to a great man of history who will never surrender, be it to unjustified accusations or to death in form of cancer, and to whom scholars in the next century will look as a magnificent thinker of the last century.Dr. Rudolf C. King

Payback: A Must Read!

Published by Thriftbooks.com User , 23 years ago
Mr. Fischel does an excellent job explaining what exactly happened with high-yield financing by Drexel Burham Lambert (Milken) in the 1980's. The book also goes into great detail about how Milkens financing of raiders helped evict the "entrenched" risk averse management of many US companies. These managers filled with anger and evny, join with their former college buddies (such as Nick Brady) to form an unholy alliance and stop Milken, Pickens, Icahn and their ilk. Mr. Fischel also describes in great detail of how a zealous prosectuor named Guiliani stopped at nothing to get Milken, et. al so he could boost his chances at the 1989 mayoral race in NYC. Fischel also speaks of some anti-semitism that might have been behind this. The book doesn't make apologies for most of what transpired on Wall St. in this era. Fischel declares Boesky and Levine to be "crooks" and shows no quarter when it comes to any of the other thieves who profited from insider trading. However, he justifies what Milken did to improve the US economy both then and now. The book also talks about Keating and the S & L problem. A great book, I couldn't put it down!!!

Finally a professional view on the high-yield bond market

Published by Thriftbooks.com User , 23 years ago
Finally a book written by someone who understands capital markets as opposed to journalists-turned-financial experts (e.g., "Predators Ball"), catering to popular sentiment (it's book sales, stupid!) and demonstrating astonishing financial naivity. Professor Fischel's account of Milken's financial innovation may never score big with general public, but it is a must-read for all finance practitioners and, hopefully, government officials, including NYC mayor.

An excellent analysis of a misunderstood, vital market.

Published by Thriftbooks.com User , 25 years ago
This book describes eloquently how Michael Milken and the junk bond market that he pioneered in the US created wealth despite all the populist reports to the contrary. Fischel shows how high yield bonds led to a huge increase in share holder wealth and to productivity gains in American companies - gains that eventually made these companies world beaters in the 90's. This market, however, was destroyed by over zealous regulators who frequently disregarded the civil liberties of junk bond practitioners and in particular Michael Milken. Indeed, Fischel compares the prosecution of Milken and his cohorts to the McCarthy era excesses of the fifties; and he makes a convincing case. Many of the so called "crimes" to which Milken pled guilty were technical violations and they may not have even been that. The author shows how Milken compromised in the face of continual and unscrupulous government and press harrasment. Despite his compromise, and the nebulous nature of his "crimes" he was sent to prison. In short, Milken was ruthlessly made a scapegoat for "the decade of greed"; his real crime being that he had made a fortune. Milken was certainly not the only victim, however. Those who worked in this market often came from outside the blue blood financial establishment and were resented for it. Lisa Jones, for example, was a teenage runaway who had made something of her life against all odds. She served a prison sentence for allegedly perjuring herself in a description of events that the courts eventually found were not a crime. In short, the assualt on the Junk bond market was a victory for establishment insiders over energetic and innovative outsiders. While it is upsetting that a well-functioning and efficient market was severley disrupted and nearly closed down. This is not the most disturbing aspect of the book. The most disturbing aspect is the illustration of how individual liberties were given such short shrift in the pursuit of populist goals. The American constitution was designed to protect the unpopular, but Fischel shows how it failed to protect Milken and others. This book provides an excellent description of some parts of the US finacial markets and so it is on reading lists in economics and business departments in universities as far afield as South Africa. However, it should also be put on reading lists by law, sociology and politics departments as an example of how the government can get you, if it wants you. If there is a criticism of the book, it is that some of the explanations are a bit long winded. But these can be skipped, and so there is no doubt that anyone interested in financial markets or civil liberties should buy this book.
Trustpilot
Copyright © 2022 Thriftbooks.com Terms of Use | Privacy Policy | Do Not Sell My Personal Information | Accessibility Statement
ThriftBooks® and the ThriftBooks® logo are registered trademarks of Thrift Books Global, LLC