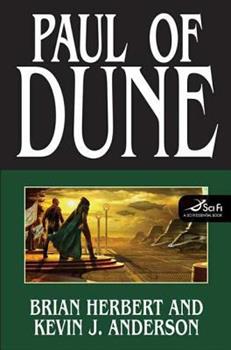 Frank Herbert's "Dune" ended with Paul Muad'Dib in control of the planet Dune. Herbert's next Dune book, "Dune Messiah," picked up the story several years later after Paul's armies had conquered the galaxy. But what happened between "Dune" and "Dune Messiah"? How did Paul create his empire and become the Messiah? Following in the footsteps of Frank Herbert, "New York Times" bestselling authors Brian Herbert and Kevin J. Anderson are answering these...

Links to the previously unknown.

Published by Thriftbooks.com User , 12 years ago
When I first read "Dune" in 1983 I was amazed at how Frank Herbert was able to create an entire universe filled with new planets, alien races, politics and of course, religious fanaticism. I was deeply saddened by the death of one of the greatest Science Fiction writers of all time. Then to my delight, the team of Brian Herbert and Kevin J. Anderson catapulted the Sci-Fi fan base back into the world of "Dune" with some of the best written and imagined stories from the early days of the Dune legacy. "Paul of Dune" is no exception. This serving of the "Dune" history is a fantastic blend of present and past as it forms a link between "Dune" and "Dune Messiah". I found the characters, the situations and the end results to be very brilliantly designed and satisfying. And I am one who has always found it tough to find good Science Fiction due to the fact that many authors tend to slide too far to the brink of being down right corny. Although I know there is a butt for every saddle and that my views are purely my own, I would hope that readers of the new "Dune" books would see fit to not only give these great stories a shot, but also realize that they were all masterfully written for one purpose; To complete one of the greatest adventures of all time. This book served its purpose with abundance.

Published by Thriftbooks.com User , 13 years ago
Loyal fans of Frank Herbert's six original "Dune" books constantly craved for more in depth novels of the sagas. After his death, when his son, Brian Herbert and Kevin J. Anderson collaborated on the first of the new sequels, "Dune: House Atreides", readers of the revered series were rightly skeptical whether the young authors would be successful in capturing the tone, excitement and depth of the myriad characters. Their first Dune book left no doubt. After only a few pages, it was impossible to tell where Frank Herbert had left off, and Brian and Kevin continued his legacy. The next eight expanded Dune novels gave devoted fans exactly what they sought: intrigue, the casting and retelling of familiar roles, whether heroic, flawed, destined for success or failure, but expanded to levels of literary suspense, constantly intertwined, as Frank Herbert had created them. The latest, "Paul of Dune", explores and reveals how Paul Atreides became both prophet and Emperor of his far reaching empire. The complexities of plots, Paul's own surfacing doubts of his awesome powers are riveting as the pages unfold. Frank Herbert would again be proud of having his name associated with the succession of the award winning and best selling Dune novels by Brian Herbert and Kevin J. Anderson.

Published by Thriftbooks.com User , 13 years ago
I just finished the book and it left me feeling very satisfied. I think it was the most enjoyable from BH and KJA since House Atreides. I feel that the book did a fine job of capturing the spirit of the original while incorporating the authors' own style at the same time. I really felt the shifting between the two timelines lent well to give the reader some insight into the influences on Paul and why he made some of the decisions he did during the Jihad. We also got to learn more about Count Fenring and the Lady Margot, as well as their daughter that was mentioned in the first book and then never further developed by FH. I thought this was a very creative story line and that it fit right in. Overall, I highly recommend it to anyone interested in the Dune Universe.

A story that needed to be told, and here it is told well

Published by Thriftbooks.com User , 13 years ago
"Paul of Dune" is the story of Paul Muad Dib Atreides immediately following his defeat of the Padashah Emperor at the conclusion of Frank Herbert's great novel, "Dune." Dune fans recall that "Dune Messiah," which was the next installment in Frank Herbert's series, is set more than a decade after the conclusion of "Dune." "Paul of Dune," then, fills a gap in the Dune saga that needed to be filled. And after finishing the novel, I believe that authors Brian Herbert (son of Frank Herbert) and Kevin J. Anderson have succeeded well. One thing that these authors have done well is to explain how the Great Houses of the Landsdraad struggled among themselves, and against the Imperial House. I found this insight to be very interesting, and this novel contains the story of a brush-fire war between House Ecaz and House Moritani that explains some of the mechanisms behind these struggles. The novel "Dune" itself makes reference to this war, and House Atreides' involvement in it. "Paul of Dune" is very consistent with both the House Atreides, House Harkonnen, and House Corrino series of Dune prequels, as well as with Dune itself. The novel is divided into two perspectives--the first deals with the period of time shortly before the events in "Dune," the second is the story of the immediate aftermath of the Battle of Arrakis which places Paul Muad 'Dib on the throne as Emperor. In this novel we get to know Paul Atreides before the fall of House Atreides that occurs in "Dune," and we also become further acquainted with the unforgettable Leto Atreides, Duncan Idaho, and Gurney Halleck. In this novel, authors Anderson and Herbert are back on their game, (I did not at all like their Butlerian Jihad series of books) and this novel is a worthy addition to the House Atreides, House Harkonnen, House Atreides trilogy. That is what I was hoping for when I read this novel, and the authors delivered. Highly recommended for Dune fans.

Not bad, not bad at all

Published by Thriftbooks.com User , 13 years ago
Kevin Anderson and Brian Herbert have written a number of DUNE books now. I have to say that NOTHING can beat the originals by Frank Herbert. I have read LOTS of negative reviews, and was expecting the worst. But I have to say this wasn't an abomination. This wasn't horrible. In fact, it wasn't bad. I thought, it was pretty good. But of all the books written by KA and BH, this one comes the closest to the original books. Perhaps I am clouded in my giddiness to be reading about Paul again, but it was a good read and kept my attention the whole time. I have to admit when they went backwards to Paul's youth, I was disappointed. I thought it was going to drag the novel down, but it didn't I enjoyed the young Paul as much as Emperor Paul. Irulan was a fascinating character in this novel. Probably much more sympathetic to her that Frank Herbert was. Overall, it wasn't as good as the original Dune. That isn't an insult. I have yet to find a book that is as good as the original. But this was, in my opinion, th best of the KA/BH books on Dune.
Copyright © 2020 Thriftbooks.com Terms of Use | Privacy Policy | Do Not Sell My Personal Information | Accessibility Statement
ThriftBooks® and the ThriftBooks® logo are registered trademarks of Thrift Books Global, LLC