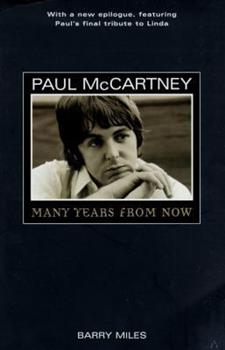 Paul McCartney: Many Years from Now

During the past year Paul McCartney has been in the public's eye more than at any time since the peak of Beatlemania over thirty years ago. His fans have been treated to the best-selling Flaming Pie and Standing Stone albums, a full hour of Paul on "Oprah," and this thoughtful and comprehensive biography that brings us closer to the man than ever before. Based on hundreds of hours of exclusive interviews over a period of five years, and with complete...

How the Music Evolved

Published by Thriftbooks.com User , 13 years ago
Barry Miles' biography of Paul McCartney (Many Years from Now) is distinctive from other Beatles's biographies for its detailed look at how all that iconic music came together. As one example, McCartney gives an insider's view of where he was and what he was doing when he composed "Here, There, and Everywhere," as well as the off hand remark that playing one particular chord led to "Fool on the Hill." Improvisation and luck appeared to have influenced so many wonderful Beatles' tunes. By the time you've finished Miles' book, you'll begin to wonder whether some higher power was also a Beatles' fan. Donald Gallinger is the author of The Master Planets

Terrific Look Over The Wall Into McCartney's Private World!

Published by Thriftbooks.com User , 20 years ago
Those of us who grew up watching the evolution of the Beatles and Paul McCartney will find this authoritative biography written by longtime friend Barry Miles a thought-provoking and interesting glimpse into many aspects of McCartney's otherwise quite private and personal life story. The view is startling, given the fact that so many in the media have forwarded the view that Paul was the lesser of the two main creative forces within the group. The account delivered here via a long-running series of interviews with Paul puts the lie to that notion, showing just how influential and fateful were Paul's contribution to the Lennon and McCartney writing genius. It also gives the fascinated reader a mind-boggling glimpse into the creative forces behind the individual songs, and travels knowingly along the historic path leading each of the "Fab Four" from poverty and obscurity to fabled fame and fortune. The result is a marvelous biography and an immensely entertaining reading experience.The book is full of insider information about the genesis and sources of each of the songs and albums along the way, ranging from the creation of "I Saw Her Standing There" all the way to the "Long And Winding Road", at a time when the members of the group could barely stand to inhabit the same space for any period of time. We come to understand how the arrival of fame and fortune changed each of them forever, and although Paul's perspective is the only one aired here, one marvels at just how fair-minded and self-effacing he seems to be in assessing the values, contribution, and failings of each of the Beatles, himself included. It also shows just how instrumental the guidance of the so-called fifth Beatle, George Martin, was to both their initial breakthrough as well as to their successful riding of the wave-crest of fame that swept over them with such an enormous impact. It also illustrates just how versatile and intelligent Paul has been, masterfully managing and orchestrating both his music and his fortune to become one of the wealthiest and most successful of the rock luminaries emerging from the sixties. And while his later music may have been disappointing in more critical terms, there is no doubting that he has been a continuing critical influence in the continuing evolution of popular music in the thirty years since the Beatles disbanded. Paul has had a rich and rewarding life, and has become a well-known benefactor of worthy causes and sometimes-reclusive widower of his long-time love and wife Linda, who died several years ago, succumbing to cancer. Still, the McCartney magic seems to shine, and this biography of him is both an interesting read and a privileged look behind the tall walls that he has built around himself in the last several decades. Given the crazed attack that fellow Beatle George Harrison suffered from a deluded fan, perhaps his concern about privacy and protection are all too well advised. Enjoy!

Many Years From Now

Published by Thriftbooks.com User , 21 years ago
Barry Mile's close collaboration with Paul McCartney in writing this book produced a literary piece that is as amusing and entertaining as any Lennon-McCartney composition. So much had been written about the Beatles and its individual members, some good and some bad. "Many Years From Now" has succeeded in setting the records straight with a "blow by blow" like account of the way Lennon-McCartney songs were written. Mile's depiction of London life during the 60's was so vivid that one can't help to see and feel things happen as he reads. This book is a "must" reading for any Beatle fan, with a splendid time being guaranteed for all.

This is the BEST book I have ever read about Paul McCartney.

Published by Thriftbooks.com User , 23 years ago
This is the best book I have ever read about Paul McCartney, and for that matter about the Beatles. I really enjoyed reading it because it explains very detailed many aspects of Paul McCartney's life, such as when he met people, how some things and some people in Paul's life influenced him, how songs started, how an album cover was designed from the beginning, why a song was done the way it was made and many other interesting details about his career, leaving out the stupid gossip about his sex life, and things like that, that only the Enquirer would be interested on. Another interesting aspect of this book is that it explains the Allen Klein fiasco clearly, much better than all the other Beatles books that I have read. The only way this book would have been even better is if the author would have continued with Paul's solo career, album by album, year by year up to today, in the same format, but maybe Mr. Miles and Sir Paul McCartney are already working on that book! This is a book that should be in any Beatles fan's home. I would also recommend this book to anybody that wants to understand what went on in the 60's. Good work Mr. Barry Miles!! Please write Part II!

Published by Thriftbooks.com User , 25 years ago
This music book contains some of the McCartney repertoire. Both Beatles and solo matierial is included. It is especially unique because of the McCartney drawn pictures included. The guitar tabs are magnificent and it truly shows McCartney's musical diversity. I highly recommend this book for anyone interested in McCarney's music.

Paul McCartney: Many Years from Now Mentions in Our Blog