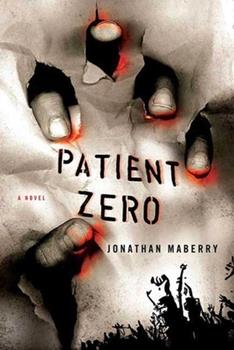 (Book #1 in the Joe Ledger Series)

Published by WhiskeySix75 , 2 years ago
This is a page turner! It draws you in with excellent characters and storyline. It will keep you on the edge of your seat till the very end! A must read!!!

Published by Thriftbooks.com User , 12 years ago
When faced with a seemingly insane Iraqi terrorist stinking of raw sewage, Baltimore Detective Joe Ledger calmly sprays a Rorschach blot with the enemy's blood against the far wall via two center-mass shots to the back. When requested to go through the unorthodox interview process of a mysterious government agency four days later, Joe is shocked to see the same terrorist, Javad Mustapha, lunging at him, snarling, frothing, snapping teeth, trying to attack Joe like a starving animal might lunge for just out of reach prey. A lethally-honed warrior with multiple martial arts disciplines under his belt, Ledger downs his opponent and snaps the terrorist's neck with a sound of bamboo shattering. For Ledger it's the first step in fighting a new form of global terrorism; Mustafa was Patient Zero, a bio weapon aimed at human extinction. Up next, Seif al Din, The Sword of the Faithful. The Department of Military Sciences (DMS) and its mysterious, frighteningly powerful leader, Mr. Church, hand-pick Ledger - a patriot warrior with weapons, combat, and military strategy expertise - to serve as leader to a new counterterrorism Echo Team comprised of a collection of the elite from the armed forces, government, and paramilitary organizations - life takers and heart breakers. Echo Team and the rest of the DMS must not only battle Muslim extremists intent on unleashing a horrifying plague of unchecked biological warfare against the world via Seif al Din, a bioterrorism weapon that turns dead people into bloodthirsty zombies, and funded by duplicitous big pharmaceutical companies developing increasingly viral strains in Middle Eastern underground laboratories, but also the red-tape and competition amongst the various clandestine government organizations jockeying for position and funding in a post 9/11 climate. A fast-paced page turner, Patient Zero is Maberry's dissertation proving this style of book can be intelligent without sacrificing excitement, details, or the wit of prose and/or dialogue. The action is non-stop, with vertebrae snapping and femurs cracking at every turn; the battles read like fights designed for Jackie Chan movies. The zombie, science fiction aspect gives off the realistic feel of how the initial outbreak in 28 Days Later may have occurred. With a perfect blend of suspense, action, graphic zombie details, and pin-point character development, the pacing is within a heartbeat of its life; there is literally no time to recover before the next mission or perilously close volley of gunfire. Waiting for the outcome is absolutely nail-biting. With a superb ending, and a plot that could easily turn into one of my favorite movies of all time, Patient Zero is a safe bet for Clancy and Chricton fans alike, as well as anyone who enjoys either military or zombie fiction. This is VERY highly recommended.

Published by Thriftbooks.com User , 12 years ago
I fully enjoyed reading this book. It was what I like to refer to as a "fun read". It was one of those books where you just don't want to put it down and can hardly wait to see what happens next. For those who don't like horror novels, don't let the subject matter deter you. This is more of a military style action book that just happens to have a horror aspect to it in the fact that there is a virus that causes zombie-like symptoms. That being said, the zombies in this book are simply horrifying monsters who kill in a most voracious manner, and are sure to delight any fans of the zombie genre. Great plot, believeable characters, and humor strewn throughtout makes for a book that I highly recommend. I hope that they make a movie out of this one!

Published by Thriftbooks.com User , 12 years ago
Oh wow, here is a book that I can honestly say kept me awake reading at night! The author brings a virus and zombies into a post 9/11 subject and makes it into one believable, fast paced read!! Now for those who are not "horror" fans and who see the word "zombie" in the description of the book and are automatically turned off, give me a minute here. It's not at all like you've seen or read before. This book deals with the world in a post 9/11 society and a virus that turns people into a "zombie like" state (and no I'm not giving away the book). I found it be be highly believable. Also there's some cool futuristic technology written into the book. Here's a book that I believe will be made into a movie.

Published by Thriftbooks.com User , 12 years ago
(I'm so glad this wasn't a quick read like a lot of other zombie "novels.") I've been obsessed with zombies my entire life. As a result, I've developed preferences for details such as the cause of an outbreak or the behavior of zombies. I was thrilled to read Mayberry's version of terrorists creating and using zombies as biological wepons: Seif al Din, The Sword of the Faithful. Out of all the outbreak scenarios I've ever read, this is up there in the top five of Most Likely To Happen. Mayberry is another author who manipulates the time line to build up the story's intensity, but it's easy to follow because he notes the location, date, and time at the beginning of each chapter. Eventually the time lines join together before you are even halfway through the book. The climax was incredible. I am so happy that Mayberry didn't have "intelligent" zombies returning to their former lives -- I'm getting sick of seeing authors trying to be philosophical (to date, Romero is the only one who could properly mix social issues with zombies). I also enjoyed the quotes placed at the intervals within the book; who ever imagined relating a Ralph Waldo Emerson quote with zombies? This was fantastic as a stand-alone book, but I would love to see a sequel of some kind. I will be adding Mayberry to my list of favorite zombie authors. Another book of his is Bad Moon Rising. If you are looking for another good zombie book, I recommend Eden.

Published by Thriftbooks.com User , 12 years ago
Joe Ledger is a Baltimore cop. A damned good cop. Yeah, sure, he's a smartass with a bit of an attitude problem. But who wouldn't be after all Joe's been through? When he was younger, he was forced to watch as his girlfriend was gang-raped. She later killed herself because of the incident, and it was Joe who found her body. His younger brother, also a Baltimore cop, has been promoted over him. But, hey, Joe's survived the worst of it, and his perseverance and hard work looks like it might finally pay off: recently recruited by the FBI, he's due to start training as an agent in less than a month. But he may not make that appointment at Quantico. In a recent police raid, Joe shot some crazy-eyed perp who tried to attack his fellow officers, and the shooting has stirred up more than a little of the proverbial poop. Turns out Joe's perp was a zombie, an honest-to-goodness member of the living dead that was actually bio-engineered by a Middle-Eastern sect for use as a weapon. And consequently, Joe soon finds himself thrust into the cloak-and-dagger operations of terrorism, political espionage, and international intrigue. Thus begins author Jonathan Maberry's PATIENT ZERO, a sci-fi horror novel that offers plausible scientific explanations for the George Romero-like zombies that have become popular in films and literature in recent years. This speculative science is wrapped in an intriguing, contemporary story that is one part Mickey Spillane, one part Michael Crichton, and one part John Grisham, with generous dashes of horror, thrills, and action thrown in for extra flavor. SMOOTH and FREE-FLOWING are two adjectives that best describe Maberry's writing style. Like Michael Crichton before him, he can summarize and explain the sometimes dull complexities of science in a way that makes it easy to grasp without being condescending to the reader. And the world he builds around the science is populated with hard-boiled detectives, international spies, terrorists, and even monsters that are anything BUT dull. In short, Maberry's PATIENT ZERO is a well-written story of international intrigue that incorporates cutting-edge science and the details of current world events into an white-knuckle thriller that seems both realistic and relevant to the modern reader. The novel cuts across many genres, and fans of horror, SF, mystery, political thrillers, and spy novels will all find this to be a fun and thought-provoking read.
Copyright © 2020 Thriftbooks.com Terms of Use | Privacy Policy | Do Not Sell My Personal Information | Accessibility Statement
ThriftBooks® and the ThriftBooks® logo are registered trademarks of Thrift Books Global, LLC