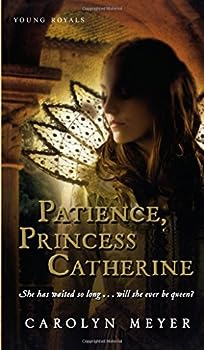 (Book #4 in the Young Royals Series)

This description may be from another edition of this product. England anxiously awaits Prince Arthur's betrothed--the Spanish princess who will be its future queen. But when Arthur dies not long after the wedding, Catherine of Aragon's fate becomes uncertain....

Published by Thriftbooks.com User , 15 years ago
Carolyn Meyer once again does a wonderful job in telling the story this time Catherine of Aragon's as she goes from Spain to England marries Arthur and becomes a widow. It truly shows how a lady's life was completely in control in that era as Catherine patiently awaits the next step. She's in a tug of war between her father and Henry VII over her dowry. When the king dies Catherine thinks she's getting her happily ever after by marrying Henry VIII but that isn't to be when she's cast assided for another and heartbroken. She's got a real fighting spirit and very admirable.

Published by Thriftbooks.com User , 16 years ago
This book was great! I loved how you saw Catherine and Henry. They were both fun to watch and see how they interacted with each other and with the people around them. It was great to see how much historically accurate information was included. It took me about 20 pages to get into it, but once I did, I couldn't put it down. This is a GREAT book for people of all ages.

Patience and You Will Win

Published by Thriftbooks.com User , 17 years ago
This is the 3rd book in the Young Royals series. This historical novel is based on Catherine of Aragon, Henry VIII's first wife. This opens in 1533, as Catherine refuses to release King Henry VIII from their marriage, renounce her title, or recognize Anne Boleyn as queen. She is imprisoned in a "moldering castle" and allowed no visitors and no contact with her daughter, Mary. This book shows Catherine reflecting on her experiences, beginning with her voyage to England at age 15 to marry Prince Arthur. Their marriage, in name only, lasted 6 months until his death in 1502. Over the next 7 years, Catherine lives with increasing poverty and decreasing prospects of marrying England's new crown prince, Henry. It shows how she hard her life was. It gives you new insight into her life. I think this book is better from 12 years and up.

A wonderful addition to the Young Royals series.

Published by Thriftbooks.com User , 17 years ago
Catherine of Aragon was a young Spanish princess known as Catalina when she left her home in the summer of 1501 to sail to England. Catherine had known since childhood that she was betrothed to Prince Arthur, heir to the throne of England, and that one day she would have to leave Spain to marry him. Now that she is fifteen, that day has come. Arriving in England, Catherine has hope for her future. Arthur appears kind, and it seems they will at least be friends. But due to Arthur's poor health, their marriage is in name only. And just six months after the wedding, Arthur suddenly dies. Now Catherine finds her once-certain future in question. As a woman she is utterly powerless to make decisions about her own life, and can only wait while those in power determine her fate. Will she be returned to Spain so that her parents can negotiate a new marriage for her elsewhere -- or will she be married to Arthur's younger brother Prince Henry, the new heir to the throne of England? Carolyn Meyer brought the world of Tudor England to life in this novel. Catherine is portrayed as a real young woman with hopes and dreams, making her ultimate fate seem all the more tragic. Readers who enjoyed the author's other books in the Young Royals series won't want to miss this one. It will also appeal to readers of the Royal Diaries series, and teens who enjoy historical fiction about royalty.

Published by Thriftbooks.com User , 17 years ago
In the 4th book of Carolyn Meyer's Young Royals series, we meet another one of the Tudor women, Catherine of Aragorn, Henry VII's first wife out of six. It is 1501, and young Catherine of Spain is betrothed to Arthur, the heir to England's throne. She begins by writing of a her journey to England. What was to be a great union of two powers was not to be as Catherine describes her utter loneliness in the English court. Arthur is very sickly and unable to perform the duties of a husband to Catherine. Six mothes after marriage, Arthur dies, and Catherine's fate is thrown up in the air as Spain and England dispute the outcome. There are rumors that she will return to Spain, and also rumors that she will marry Henry. Catherine's life is thrown into chaos for the next 7 years, and she lives through a time of poverty while the two kingdoms fight over her drowry. Through it all Catherine is determined to become Queen of England one day. During this time she comes into acquaintence with Henry, Arthur's younger brother. Catherine takes a liking to Henry and in the end, she does marry Henry and become England's Queen, though quickly the happiness fades. This was another wonderful book in the Young Royals series. Catherine painted a very vivid image of her life in the English court and her feelings toward Arthur and Henry. Fans should definitely also read Mary, Bloody Mary, about Catherine's daughter, and Doomed Queen Anne, about Anne Boleyn, the woman who ultimately stole Henry's heart from Catherine.
Copyright © 2020 Thriftbooks.com Terms of Use | Privacy Policy | Do Not Sell My Personal Information | Accessibility Statement
ThriftBooks® and the ThriftBooks® logo are registered trademarks of Thrift Books Global, LLC