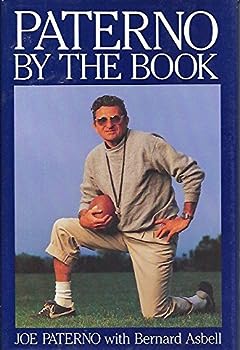 Paterno: By the Book

[Audiobook CASSETTE Library Edition in vinyl case.][Read by Joe Vincent] Here are the Paterno principles: the straight word from the curious quarterback and English major who went from Brooklyn to... This description may be from another edition of this product.

Published by Thriftbooks.com User , 16 years ago
"By the Book" chronicles the life of Joe Paterno. It begins with a description of his childhood and prep school years in Brooklyn, takes us through his football career at Brown University, and how he became the head coach at Penn State. The book is rich with descriptions of Penn State players and seasons up through the 1988 season. But, this book is much more than a football story. It's a view into Joe Pa's heart and soul. It is a portrayal of his values, his motivations, his vision and dreams. These, not just for his football team, but for his family, his university, and his profession. Much more than a fun read for Penn State fans, it is a valuable resource for aspiring coaches and players searching to find the essence of their relationship to their sport.

Published by Thriftbooks.com User , 18 years ago
Published before the 1989 season, Paterno: By the Book provides a great deal of insight into the mind of one of the greatest college football coaches ever. The book is more memorable for Paterno's musings on life, recruiting, winning, losing and growing up with a strong mother rather than for his specific thoughts on the numerous games he has coached. Assuming the book is in fact an accurate portrayal of Paterno, it is clear that he will never voluntarily step down from Penn State, no matter how bad things get. He is determined and driven to succeed. He will not quit and he will not go quietly. From many of his remarks in the book about Penn State, it is clear he feels the same way a number of his supporters do, Penn State owes Joe loyalty for his many years of service. A solid sports book about sports...and life.

Published by Thriftbooks.com User , 24 years ago
This book is a must read for football fans, coaches, players, and for anyone interested in how to succeed in sports competition. Although it is his life story, one can garner many pearls of wisdom about how to succeed, how to compete in an honest and sincere way, and the values that must be instilled in any sports players, young and old. You can find out why a man would turn down a 1 million job to coach at Penn State for 100K. Or why Joe Paterno rolls up his pants for games. Most of all, you can find the nuances and ideals behind the most successful college football coach, and the most successful college football program, in history.
Trustpilot
Copyright © 2022 Thriftbooks.com Terms of Use | Privacy Policy | Do Not Sell or Share My Personal Information | Accessibility Statement
ThriftBooks® and the ThriftBooks® logo are registered trademarks of Thrift Books Global, LLC