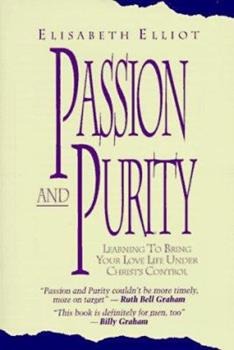 Passion and Purity: Learning to Bring Your Love Life Under Christ's Control

Using her own life as an example, Elliot guides singles of both genders and of any age on how to put their love lives under the authority of Jesus Christ.

Published by Thriftbooks.com User , 16 years ago
I am an African who first read Elizabeth Elliot's book "Passion and Purity" when I was a newly divorced mother of four. I was in my early thirties then and lived in Africa. Although I was raised as a Christian, I have never heard that it was possible to not date as I was influenced by western songs and western movies to think that dating was the norm. What I found, much to my surprise, when I started dating as a single mother, was that my body was different - perhaps because I had given birth. I could not control myself when I when I started being physical with a man. I had to go all the way, even though I was a Christian. My biological urge was greater than my sincere convictions about Christ. Then I read Elizabeth Elliot's book, and the light came on!!!! I now live in the Northwest Territories in Canada, and I met Elizabeth Elliot's nephew who used to be a pastor here. He forwarded a letter from me to her, and she wrote a letter back to me. I am now 56, and still not married, but I so value her advice in her letter to me, which was that I seek first the Kingdom of God. That to me means that I do not have to look for Mr. Right. God will bring him to me in His time. I feel very peaceful therefore. I have bought Passion and Purity for a couple of churches which I have attended in Canada. I have also given her book to some young women. I am currently in the process of writing to the various school boards in the Northwest Territories, telling them about this book, as the rate of venereal diseases is very high here. I want them to at least plant the seed in people's minds that one does not have to date. I have also listened to a tape from my church which said that dating is a North American idea. In Britain, so it said, people used to go out in groups. I do know one church in Edmonton where they encouraged going out in groups among the youth. I am immensly grateful to Elizabeth for turning me into a pure woman. For me, it is strictly no dating and no touching until marriage.

A guidebook on the right way to find a mate

Published by Thriftbooks.com User , 19 years ago
I first read this book in my early teens, before I'd ever done any real dating. I kept going back to it, both when someone of the opposite sex was interesting me, or when down about there being no one in the picture. She offers a lot of very practical sound advice as to how to go about dating in the right way. I also found it extremely valuable when I realized that I was single, out of college, and had NO prospects on the horizon. I was able to accept that I didn't need to worry about that. God would find me a spouse, so I didn't have to. And that's exactly what He did.Some have suggested that her personal experience was too different from most people's to be applicable. To anyone with such a perspective, I would suggest that you are reading it all wrong! I don't think Elisabeth Elliot would suggest that everyone needs to have a Jim and Elisabeth duplication in their own lives before marrying. She offers principles that apply regardless of your personal circumstances.A couple of very valuable highlights that stand out to me, years after getting married. Her chapter on "What can a kiss tell you?" was really right on. Physical communication is tempting, but actually, it shuts down the more important forms of communication for finding Mr. Right, and can actually give you a lot of regret.I also valued the romance in Jim's perspective when he wrote to her, "I have you now unravished." He was grateful to look forward to the time when physical intimacy was right, and to leave something to look forward to! That is so completely romantic, and I think it is almost tragic that in today's society, that romance is almost unheard of. People take what isn't theirs don't relish the anticipation of getting it AT THE PROPER TIME. My husband and I went about it that way, and I found it very romantic, both the anticipation of the consumation of my marriage, as well as when that actually took place. I wouldn't have wanted to have cheated myself out of that beautiful memory!Old fashioned? I suppose it is. Relevant and needed in this day and age? Absolutely. When you put your love life in God's hands, that is a safe place to leave it.

Published by Thriftbooks.com User , 20 years ago
I first read this book when I was about 18 years old. I remember thinking that it was a great book, and having a general feeling of being encouraged by it. Then I put it on the shelf and forgot about it. 6 years later, I have found myself going through some hard times. The guy that I dearly love has moved away, and life just seems bleak. To further complicate it, our relationship had moved from friends, to more serious, then to a time of no communication at all, back into friends. It's been very, very hard on me. I've spent countless nights crying myself to sleep, trying to figure out God's will in this, and praying that the guy would come back. Trying to balance loving the guy unselfishly, while wanting him so badly. It was confusing to say the least. Recently I saw this book on my shelf. I picked it up, intending to read a chapter or two. I read for hours. It was like every word was written just for me. I realized how far off the mark I was in putting God first in my life. I had wandered far away from what I wanted to be. This book brought that sharply to light. I felt that God was hitting me with a 2x4 saying "wake up, you need to learn some hard lessons." In the course of re-reading it, I've cried, given things to God, struggled to honestly try to put God first, just to name a few things. This book is about love relationships, yes, but to me is it also about putting God first in one's life, no matter how difficult that may be. It is teaching me to love God with my entire being. I feel that it has completely changed my life for the better. I still am struggling, still crying, but I'm drawing closer to God, and realizing that He will never leave me. His Grace is sufficient for me... Thank you Elisabeth Elliot for writing this book, it is a God-send.

Published by Thriftbooks.com User , 21 years ago
This is a fantastic book. It changed my life. This is the fantastic story of the author's romance with Jim Elliot, a man she admired from a distance in college and later married. An incredible courtship story.Some people might think Elliot's teachings are "old fashioned," but look at her life! She's been happily married three times. (Widowed twice.) Wow! You won't be able to put this book down! If you follow the author's advice, you're life will be changed for the better and you will be better equipped to deal with the dating jungle out there.
Trustpilot
Copyright © 2022 Thriftbooks.com Terms of Use | Privacy Policy | Do Not Sell or Share My Personal Information | Accessibility Statement
ThriftBooks® and the ThriftBooks® logo are registered trademarks of Thrift Books Global, LLC