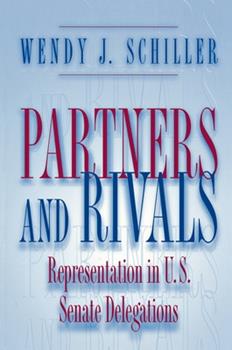 How Senators Represent their States

Published by Thriftbooks.com User , 21 years ago
This book presents the theory, backed by quantitative analysis, that a state's Senators should be considered as a pair to better understand representation in the Senate. In spite of the fact that they don't run against each other and are not even elected at the same time, Senators from the same state compete with each other to gain individual recognition for their legislative achievements. In other words, they join different committees, specialize in different areas, and generally emphasize their differences to compete for individual media coverage. They try to establish unique reputations in order to convince the voters that they are effective legislators. The author concludes that the result of this competition is better representation for states in the Senate. By focusing on different legislative areas, the pair of Senators actually represent a wider group of interests in their state.I found the arguments in this book persuasive. Although I'm not very familiar with the regression analysis models used, I found the conclusions easy to follow without focusing too much on the math. I also enjoyed the quotes from the more detailed research, including interviews with Senate staff, surveys of newspaper editors, and news articles. In addition, the author provided many specific examples of the contrasting legislative styles and practices within Senate delegations including a discussion of New York's Senators Moynihan and D'Amato and Oregon's Packwood and Hatfield. These details clearly illustrated how Senators from the same state build distinct legislative agendas.
Copyright © 2022 Thriftbooks.com Terms of Use | Privacy Policy | Do Not Sell My Personal Information | Accessibility Statement
ThriftBooks® and the ThriftBooks® logo are registered trademarks of Thrift Books Global, LLC