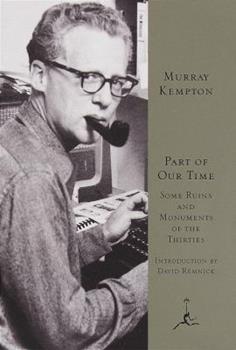 Part of Our Time: Some Ruins and Monuments of the Thirties

First published in 1955, Part of Our Time consists of ten incomparable "novellas" that profile individuals whose lives were transformed by the radical movements of the thirties. The Pulitzer Prize-winning journalist Murray Kempton writes of people who "shared at one time or another the conviction that the most important thing in life was a remorseless effort to throw down the society which had raised and alienated most of them." Included are portraits...

Published by Thriftbooks.com User , 12 years ago
This transaction went very smoothly, excellent communication and more than adequate shipping protection. These people know what they are doing and should have great success selling all that they offer.

Essential reading to understanding Communism in the U.S.

Published by Thriftbooks.com User , 18 years ago
Picked this one up through reference in a biography dictionary on Communism in the United States. Glad I did. This is a hidden gem.Mr. Kempton does not approach the issue from a philosophical or principle orinted point of view. He doesn't discuss Communism and its ideals or compare and contrast various belief systems. He approaches it from a personal standpoint. He takes several peripheral characters, for the most part, and unfolds their lives. Apparently, he himself was involved in ascending into the Communist camp for a time.Rather than deal with the major players, he deals with minor players (minor, to me anyhow, as I'd never heard of many of them). This is what makes it interesting. By delving into the lives of these characters, he puts the times into a greater context by which we come to understand the appeal of Communism and its part in the broader scope of the 1920s and 1930s. Labor unrest, the Communist thread, the radicalism during this period and the economic devastation is something we seem to be one step removed from these days and the impact this period of time had on people is often lost. It's amazing how much what is said in this book rings true today. Truly history repeats itself. Not only do we begin to understand the times but we begin to see how diverse and different those who decided to take up its banner really were and how Communism was not necessarily the direct appeal but it was a means to an end, a reaction rather than proaction. He is sympathetic towards his characters and you feel the pathos as you read about their lives. They become very human and very real, something often lacking in history books. There is a tinge of sadness surrounding all the individuals in the book. His writing style is quite fresh and dramatic with a flair for the metaphor. If you wish to understand what was going on during this period of time and what the appeal of Communism was and why these individuals jumped on the bandwagon, this book is a must read.
Trustpilot
Copyright © 2022 Thriftbooks.com Terms of Use | Privacy Policy | Do Not Sell or Share My Personal Information | Accessibility Statement
ThriftBooks® and the ThriftBooks® logo are registered trademarks of Thrift Books Global, LLC