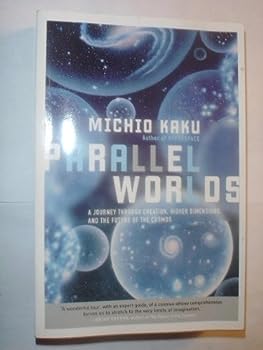 Parallel Worlds (A Journey Through Creation, Higher Dimensions, and the Future of the Cosmos)

This description may be from another edition of this product. In this thrilling journey into the mysteries of our cosmos, bestselling author Michio Kaku takes us on a dizzying ride to explore black holes and time machines, multidimensional space and, most...

This is the one

Published by Thriftbooks.com User , 15 years ago
I've read most, if not all, of the recent series of published books on this particularly interesting and complicated subject, and this is the one. The most understandable of them all. Clearly written with the non professional in mind. Michio Kaku presents all the information of what isn't the most easily understood of subjects in a fashion which allows for an enjoyable reading experience of the ever changing and sometimes reinvented theory that comes tantalizingly close to the much sought after Holy Grail Theory of Everything. (wow, wasn't that a long sentence.)

Published by Thriftbooks.com User , 15 years ago
I've read half a dozen books attempting to explain the essentials of cosmology, the big bang, quantum mechanics, string theory, dark energy, and other facinating, but horrendously difficult, concepts. Kaku does better at helping my feeble mind understand the origin, the composition, and the ultimate fate of the universe than any other author I have encountered. Moreover, this book is up-to-date -- published in 2005 -- and given recent developments in theory any book over about 5 years old will be a bit behind the times. In Chapter One, Kaku summarizes in simplified form what he will discuss in the rest of the book -- and lo-and-behold I could understand it! He then gives a brief history of cosmology and delves into the development of cosmological thought. I stumbled through a lot of the material, but his writing and examples, often drawn from science fiction, were interesting, although not always comprehensible to me. The most unique part of the book was his speculation that a near infinite number of different universes may exist in different dimensions and that someday, a billion or so years hence, we may learn to pass from one to another. In fact, as he points out, it may become necessary for the survival of the human race when our old star begins to burn out. Confirmed atheists may be offended by his frequent references to what sounds a lot like "God." His speculations on the nature of future civilizations, the possibilities of time travel, and man's search for the "theory of everything" were fascinating. For the general reader who wants to take a tour of our universe -- its largest and smallest elements -- this is an excellent introduction. Smallchief

Current cosmology for a lay audience

Published by Thriftbooks.com User , 16 years ago
I think it was Niels Bohr, the great Danish physicist, who told his fellow scientists many years ago that they had an obligation to try to enlighten laymen about the latest findings of science. This was not long after Einstein's theories of relativity and the development of quantum mechanics had demonstrated that the world in which we live and thrive was much stranger than previously thought. The comfortable and intuitive cosmos, as described by Newtonian mechanics, had been superceded by a world view that seemed not only bizarre, but even incomprehensible. This new book by Michio Kaku is one of the latest efforts by leading-edge scientists to fulfill that felt need recognized by Bohr. Targeting the educated layman, Kaku addresses his audience in a manner that is both entertaining and non-intimidating. Instead of mathematical descriptions, he relies on everyday analogies to convey his meanings. He includes a good measure of the history behind the theories, spiced with anecdotes and humor. While tackling an inheritantly difficult subject matter, he has succeeded in making it about as accessible as it could possibly be for a lay audience. I emphasize that this is an up-to-date account. Just a few years ago, some physicists were merely speculating about the possibilities of multiple universes, parallel worlds, time travel, worm holes...things that sounded then more like science fiction than fact. Data only recently acquired by the WMAP satellite and the rapid development of string theory (and its latest incarnation, M-theory) have caused many of the best minds to not only entertain the possibility of such phenomena but, in many cases, consider them necessary corollaries to any credible Grand Unified Theory ( i.e., a "theory of everything.") According to Kaku, we're getting very close to such a theory. This is heady stuff, presented in a form that makes science fiction, the ramblings of mystics, and the wildest conjectures of amateur cosmologists seem dull by comparison. And it is offered to us by a man who is at the forefront of current physics, a leading theorist in string theory and, most notably, a man who is an expert in assuring that his speculations are not in conflict with known facts. I recommend this book to anyone who is interested in what science knows today about the past history and nature of our cosmos and what the future may hold. It's an absolutely fascinating read!

A wonderful book for the intelligent lay person

Published by Thriftbooks.com User , 16 years ago
As an applied physicist/electrical engineer who received his Ph.D. in 1952, and who has never taken an interest in particle physics, but has always been a devoted reader of science fiction, "Parallel Worlds......" is endlessly fascinating, and strangely enough, even suggests, that physics has shown that our universe is such a wonderful place, that it may even have had a designer! The whole book does not contain a single equation, but does assume that the reader has a knowledge of at least basic modern science. For instance Kaku talks reasonably glibly of concepts such as absolute zero, Maxwell's equations, Einstein's general relativity theory and of course quantum mechanics. I borrowed this book from our local library, but will definitely have buy my own copy. I will close with a quote from the book: "Physicists are made of atoms. A physicist is an attempt by an atom to understand itself". Professor Kaku is not only a brilliant interpreter of modern physics to us lay people, but also a science fiction devotee. He quotes many science fiction authors in such a way as to enhance the beauty and majesty of his topic.

Published by Thriftbooks.com User , 16 years ago
I am physics student and found this book very interesting. Kaku assumes that you have some prior elementary knowledge of physics and mathematics. It is not like the recent book of Brian Green where he explains many times the details which makes the reading unpleasant and break the tempo e.g. Kaku on symmetry just assume that the reader must have heard of symmetry groups like SU2 and SU3 and on wave functions and probability amplitudes he assumes that reader have some kind of prior knowledge. He doesn't go technical though so you won't find any equation and unnecessary details. It is one of those books which is easy to follow and fun to read. It makes the reader to think about all that theory and equations in QM. I love the way he told about the Feynman path integration. No body told us that before. Lots of equations in physics and mathematics are just another equation but in this book Kaku put meaning to lot of them which not many people can do successfully. I found this book much better than the Brian Green's Fabric of Cosmos. It is just like when you compare QM text by Shanker and Sakurai. This is much like Sakurai, concise and interesting and easy to read as Griffiths.
Copyright © 2020 Thriftbooks.com Terms of Use | Privacy Policy | Do Not Sell My Personal Information | Accessibility Statement
ThriftBooks® and the ThriftBooks® logo are registered trademarks of Thrift Books Global, LLC