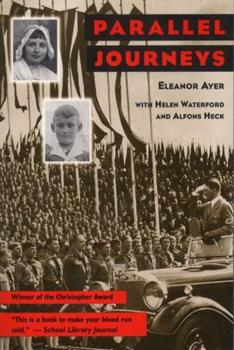 She was a young German Jew. He was an ardent member of the Hitler Youth. This is the story of their parallel journey through World War II. Helen Waterford and Alfons Heck were born just a few miles from each other in the German Rhineland. But their lives took radically different courses: Helen's to the Auschwitz concentration camp; Alfons to a high rank in the Hitler Youth. While Helen was hiding in Amsterdam, Alfons was a fanatic believer in Hitler's...

The World Must Never Forget

Published by Thriftbooks.com User , 14 years ago
The world must never forget the holocaust. Today some people espouse a theory that the nearly 12,000,000 deaths (6,000,000 of them Jews) at the hands of the Nazi party never happened. This sad, but honest, tale traces the lives of two persons who lived through that era. Helen Waterford was a Jew who experienced the atrocities first hand. Alfons Heck was a high ranking member of Hitler's youth. Both lived to tell their tales. Both met each other after the war. Both told their tales together. This book alternates chapters between the two principle characters so the reader can witness this period through eyes on both sides of the ideological conflict. This is really two books in one. Either story will challenge the mind and heart. Either one of the stories is an important read, but both placed together in this manner makes for a 5-star book. Our local middle school uses this classic in some of the literature classes. You will be richer for having read this book.

Great for youth to read

Published by Thriftbooks.com User , 18 years ago
This book is geared for youth, and I think it's okay for kids from age 10 on up. Older teenagers and adults should be sure to check out Heck's other two books, "Child of Hitler: Germany in the Days When God Wore a Swastika," and "The Burden of Hitler's Legacy." All three books contain good stuff that is left out of the other two books - for example, Parallel Journeys contains the Jewish perspective of Ms. Waterford, and is written for youthful readers; Child of Hitler focuses on the events prior to and during the war; and The Burden of Hitler's Legacy provides a lot more detail about the events leading up to the end of the war, and the events after the war. I strongly recommend all three books, and promise you that you will not come away with the feeling that you have read the same story three times.

A Nazi son and a Jewish daughter -- together at last

Published by Thriftbooks.com User , 20 years ago
While they aren't from the same family, Helen Waterford and Alfons Heck have developed similar respect for one another that siblings have for each other. In their childhoods, these two never would have dreamed that they would be traveling the country together giving lectures at high schools and colleges. Heck was a rising power in the Hitler youth; Waterford a young Jewish girl suffering through concentration camps and death marches. Eleanor H. Ayer weaves the stories of both these survivors together beautifully. She incorporates the history of the Holocaust as well as personal testimony from Waterford and Heck. This really is a must read for anyone interested in the Holocaust or the oppression of Jews from 1933-1945.

Published by Thriftbooks.com User , 20 years ago
I have read many books about the Holocaust which have moved me. This book, however, was unique because side by side it presented two divergent stories brought together in a very factual way by the author.So in essence, we have three points of view; that of a survivor, a perpetrator and an author. The author has woven these stories together very skillfully and given a very comprehensive picture of Nazi Germany leading up to, during and after WWII.This book gives us two, true suspenseful stories against a factual historical backdrop all in one powerfully moving book. It was a courageous endeavor by each of the three who wrote it. I would recommend it for all students who are interested in getting an authentic view of this dark period in the history of the 20th Century. The book ends on a note of hope. Indeed just the fact that such a book could be written by two people with such opposite - life and death experiencesis a testimony that healing of even the most abominableexperiences imaginable is possible. I couldn't recommend it more highly.I would give it a 10+.

Published by Thriftbooks.com User , 21 years ago
This is a great book. It contrasts the views of a Hitler Youth and follower and a Jewish Prisoner very well. If you are interested at all in the Holocaust, this book is a must read. It is filled with interesting and horrifying facts. The author arranged this book well
Copyright © 2020 Thriftbooks.com Terms of Use | Privacy Policy | Do Not Sell My Personal Information | Accessibility Statement
ThriftBooks® and the ThriftBooks® logo are registered trademarks of Thrift Books Global, LLC