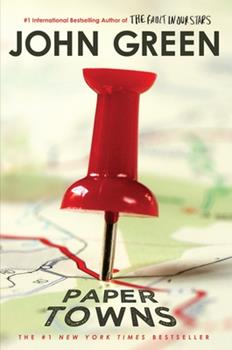 Winner of the Edgar Award The #1 New York Times Bestseller Publishers Weekly and USA Today Bestseller Millions of Copies Sold Q uentin Jacobsen has spent a lifetime loving the magnificent Margo Roth Spiegelman from afar. So when she cracks open a window and climbs back into his life--summoning him for an ingenious campaign of revenge--he follows. When their all-nighter ends and a new day breaks, Margo has disappeared. But Q soon learns that there...

i love this book

Published by melissa , 3 months ago
however, the condition this book came in was disgusting and appalling, the cover of the book was covered up in a dried up substance and was disgusting, the least they could've done was cleaned it up before mailing it out.

John Green does it again!

Published by Elizabeth , 7 months ago
John Green's book are so human. He shows the cold truth while keeping it fairly light and fun. This book was awesome!

Part of me was dissapointed

Published by Bella A. , 3 years ago
I read this book in one sitting, anxiously waiting to see the outcome. To say the least, I was really disappointed with the ending. Though, I don't necessarily think it is a bad book because of that. It's gripping and you'll want to stay reading.

Published by Thriftbooks.com User , 13 years ago
I didn't plan on starting my review of John Green's newest book Paper Towns (2008) with a mention of Brotherhood 2.0, I really didn't. But having finished the book I find that, really, it is the right place to start. Back when I had a myspace page, a lot of my friends were authors, library types, and bands. One of those friends was John Green who posted a bulletin about a project he and his brother decided to start in January 2007. Having noticed that they communicated almost entirely through e-mails or instant messages, Hank Green decided that he and John should communicate for a year only through daily (except for weekends and holidays) videoblogs . The rules are more elaborate, but that was the basic premise. Throughout the course of the year, John and Hank exchanged a lot of videos about two things: Being a a Nerd Fighter, the true meaning of Awesome, and World Suck Levels. (Fans might also remember an entertaining Valentine's Day post relating to pink wine.) At some point during this crazy brilliant idea, John Green and Hank Green continued to work. For John Green that work was writing a book. And, maybe it's because I now know more about Green, but reading Paper Towns kept bringing me back to those Vlogs whose themes seemed to have made their way into this novel to interesting (and entertaining) effect. Now for some linkage: The original Brotherhood 2.0 videos can be found at Brotherhood2.com. (They also have their own channel on Youtube.) Since the vlog project's end in December 2007, the Brotherhood 2.0 site has been reshaped into a Nerd Fighter headquarters at Nerdfighters.ning.com. Last, but totally not least, you can find John Green's site at Sparksflyup.com. Now for some actual review: Quentin Jacobsen has loved Margo Roth Spiegelman from afar for most of his life. It's hard to not love someone who is equal parts phenomenon, mystery, and adventure. With end of high school mere weeks away, Q is prepared to accept that Margo will always be closer to fantasy than reality. All of that changes when Margo, dressed like a ninja, opens Q's window and asks for his help: Tonight, darling, we are going to right a lot of wrongs. And we are going to wrong some rights. The first shall be last; the last shall be first; the meek shall do some earth-inheriting. And so begins an eleven part, all-night odyssey that will change Q's life, particularly--he hopes--how his life relates to the lovely Margo Roth Spiegelman. Before Q can find out with everything will be different, Margo disappears--on its own, not an unusual occurrence. Part of being Margo Roth Spiegelman demands the ocassional disappearance to plan and execute further adventures. The strange thing, the reason Q can't pretend this disappearance is normal, is that Margo left clues. For him. As Q, with the help of his fantastically-written friends, tries to trace Margo's path he finds more questions than answers, realizing that he might need more than clues to lead him to the girl h

Published by Thriftbooks.com User , 14 years ago
"Paper Towns" was written by a smart, smart man. I've heard about John Green before, but this is the first time I've read one of his novels, and I can hardly articulate how impressed I am. He writes flawed, nuanced characters that spout off highly quotable dialogue. In short, this is a book you quite simply need to buy. To elaborate a bit... The book is divided into three sections. In the first, Margo Roth Spiegelman takes Quentin, our protagonist (who, sidebar, is in love with her) on a crazy, 'spontaneous' journey that changes his life forever. In the second part, Quentin tries to make sense of the events that follow that glorious night. In the third and final part, he goes on a road trip with his friends in order to meet up with Margo. All of this seems rather simple, but it's packed so tight with bittersweet poignancy, insight, and intelligence that you can hardly believe the book is only three-hundred pages long. And really, when a book can incorporate Walt Whitman's "Song of Myself" as well as this one did, and offer more insight into Whitman's words than any literary criticism possibly could... what more could you ask for? The book is just overflowing with ideas, literary references, deep understanding of the way senior year in high school feels, and--most importantly--insight into the way people perceive things. What I love most about Green's writing is that he never has the characters settle on these big, life-changing revelations. When Quentin discovers something vital about understanding life, his finds are often refuted by a new realization, that is later refuted itself. It's a very "in the moment" novel, written about a boy in love with a very "in the moment" girl. I love how there are so many ideas at work here that you never feel talked down to, because Green isn't really giving his readers a message. He's just encouraging them to ponder things in order to, hopefully, connect with one of these ideas. Because, in the end, this intricate and insanely well-written book is just about someone connecting with something else. 9/10

Published by Thriftbooks.com User , 14 years ago
To everyone who surrounds Margo Roth Spiegelman, she is an adventurous, unconventional, and intelligent person and a highly admired someone that everyone puts on a pedestal. So when Margo sneaks into Quentin Jacobsen's room one glorious night and involves him in her crazy exploits, he can't help but feel as if a new page has been turned, and just maybe he can be a part of the marvelous Margo's life. But the next morning all of Quentin's hopes are dashed with Margo's disappearance. Her parents and the police think this is just another one of her stunts, but Q's not so sure. Because Margo has left him a string of clues, one right after another, which just might lead him to her. But the thing is, he's not sure what he'll find. John Green brings readers another surprising, witty, and fully honest book in Paper Towns. His writing is captivating from the very beginning as multitudes of details, no mater how large of small, flow seamlessly together. Green has a knack for highlighting the little distinguishing factors that make us human, making for more believable characters and completely enthralling book. The mystery in Paper Towns is clever, and will leave readers scratching their heads as Q and his friends struggle to piece together the clues with some frustration and tons of humor. But the teens are just as quick to get serious as they contemplate what has actually happened to Margo and as Quentin especially comes to see her in a completely different light with a little help from the poetry of Walt Whitman. Though Paper Towns did slow down a little bit in the middle of the book as Quentin hits a brick wall in his search, this novel is suspenseful, hilarious, and quirky, and especially appealing to the well read teen. The characters are as real as your own friends, and teens can't help but see pieces of their own lives in this amazingly candid book. Read at your own risk though--Green's works are completely addictive, and once you start, it's impossible to stop.

Paper Towns Mentions in Our Blog 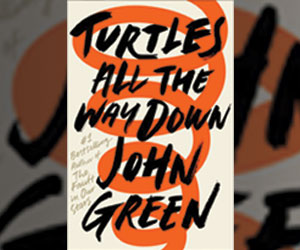 This week we get Turtles All The Way Down in our hot little hands. It’s John Green’s first book since The Fault In Our Stars debuted on the New York Times bestseller list nearly six years ago. Yes, we’ve been waiting nearly six long years for another story.