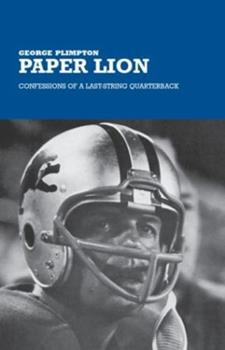 A literary classic about the author's attempt at playing professional football for the Detroit Lions.

Published by Thriftbooks.com User , 15 years ago
Back in the 1960s, writer George Plimpton began "covering" a variety of sports through participating on/with pro teams/athletes and reporting on it through books, magazine articles and TV specials. Perhaps his most famous was in the early 1960s when he was "signed" by the Detroit Lions as a 36-year-old rookie trying to make the club as a third-string quarterback. Plimpton - wearing jersey number 0 - practiced with the team for one month. His quarterbacking culminates with his appearance in a scrimmage where Plimpton calls a number of plays under game conditions. The book leads the reader through the highs and lows of Plimpton as a player, along with great anecdotes on the teammates and coaches. A reprint is slated for publication in September 2006. I hope the TV special on Plimpton's training camp and QB play gets dusted off during the upcoming NFL season. Anyone reading this inside that large campus in Bristol, Conn.?

Plimpton is Most Valuable Writer

Published by Thriftbooks.com User , 15 years ago
Every sports fan, at some point in their life, has wondered what it would be like to live in the game and play amongst its stars. George Plimpton, original editor of The Paris Review and a pioneer of "participatory journalism," takes his readers on a revealing, albeit slightly outdated account of life as a professional football player in his best-selling book, Paper Lion. Plimpton's strength lies in his ability to connect the reader to any situation he presents. Plimpton, with barely any previous playing experience, deftly conveys the frustration in watching supremely talented athletes accomplish tasks that seem impossible to nearly everyone else. Page 49 has an especially strong example, when Plimpton watches Hall of Fame defensive back and punter Yale Lary warm up. "It was always frustrating to watch the ball soar into the air from Lary's foot, and then to try and do it yourself - which suddenly imbued the ball with a lead center, replacing the life that was in it; it was like punting a large dead bird in comparison. I envied the kicker's skill. It seemed so simple." Anyone who has ever played football knows exactly what he is talking about, and Plimpton seems to bring out these reactions often. Countless times, Plimpton narrates from a fan's perspective, and readers will immediately understand and more fully interact with the memoir because of his descriptive writing. However, some might be put off by the very formal tone of the piece, which at times seems a bit excessive, even for a Harvard graduate: "My credentials as a football player may not have been of the first order. But I kept assuring myself that the purpose of my participation in professional football was not to represent the skilled performer but the average weekend athlete" (10). Yet, Plimpton balances the sometimes awkward language with believable dialogue and straightforward images. But perhaps most importantly, Plimpton is able to colorfully detail many stories throughout the memoir, and reveals personal sides to players that fans would otherwise never be able to see. For anyone who has ever cared about football, or just sports, this book is a must-read.

Published by Thriftbooks.com User , 15 years ago
George Plimpton-founding editor of The Paris Review and regular writer for Sports Illustrated-wonderfully portrays life as an NFL quarterback in his memoir Paper Lion. Many journalists try to keep some distance between themselves and the story that they cover. In his career, Plimpton took journalism to a different level, developing what is known as "participatory journalism." Besides playing quarterback, Plimpton pitched against Willie Mays, boxed Archie Moore, and played in a PGA tour event. What he did best in this book, though, is change a memoir from a first-person narrative into a story that came alive like a novel or another work of fiction. Plimpton's descriptions of, and interactions with characters-cornerback Night Train Lane, general manager Edwin Anderson, receiver Gail Cogdill, defensive lineman Alex Karras, among others-are so precise as to bring the reader into the room alongside the football player and him. His creation of Lane's character is the best: "Train was easy if occasionally puzzling to listen to-his voice high and friendly; if something serious was on his mind the tone became gentle and curiously poignant. He had an odd habit of lengthening one-syllable words into three [...] He was likely to slap suffixes on the ends of words, such as `captainship,' so that his sentences were rich (138)." One of Plimpton's most admirable qualities is that he tries to connect with readers and make them feel comfortable from the start of the book. Some readers might argue that Plimpton, because he is a sportswriter, can successfully join any professional team he wants; he believes just the opposite, writing on page ten, "My credentials as a football player may not have been of the first order." The author seems to have selected the perfect scenes to tell his story. In addition to all the anecdotes about specific players, Plimpton recounts bus rides to and from exhibition games, team dinners, daily workouts, and evenings spent relaxing with teammates-giving fans a chance to take a look back at part of football history. This book was outstanding in its era (1963), and it certainly is a classic in sports literature.

A timeless classic in participatory journalism.

Published by Thriftbooks.com User , 17 years ago
George Plimpton was the first, in the sports world, to employ "participatory journalism" in order to produce a story, or in this case a book. Over the years, Plimpton put himself in several different positions for the sake of his readers... hockey goalie... prizefighter... pitcher... he even tagged along on the PGA Tour. However, none of those really hit home on a large scale quite like PAPER LION, the story of Plimpton's trials and errors in training camp with the Detroit Lions prior to the 1963 season. It even led to a movie starring Alan Alda by the same name. When PAPER LION was published in the mid-1960's, it was a wonderful behind-the-scenes look at professional football. Before the days of constant national television coverage, Monday Night Football, hour after hour of pregame shows, or the NFL Network, this book was truly the first look at what goes on before a season for the players that you'll be cheering for when fall rolls around. Plimpton's premise was that he was coming in as an unheralded rookie just trying to find a position to play, but it wasn't long until his secret was out. The beauty of this book is that Plimpton was anything but an athlete. He came into this setting having never played a down of organized football in his life. That being said, the strides he made in a four week period were astonishing. Granted he wasn't going to make the team as a 36-year old rookie, but he certainly made progress leading up to his time in the intrasquad scrimmage. More important than the actual time on the practice field is the look he provided into the inner workings of the Detroit Lions program; the life in training camp after the day's practice had ended and everyone was back in their rooms or out on the town. As passionate as fans can be, some of them tend to forget that their gladiators of the gridiron have lives outside of the playing field. Reading about the lives of the Lions players, from the well known names of Alex Karras and Night Train Lane to the relative unknown players like Lucien Reeberg, adds a dimension to the league that went uncharted until this was published. What makes this work so great is the fact that it is truly timeless, despite the fact that is was written 41 years ago, 4 years before the first Super Bowl! When it was first unleashed in the mid-1960's, PAPER LION was a great behind the scenes look at an NFL team in training camp. Now, a reader is treated to an amazing commentary showing the progression of professional football from then to now. Gone is the innocence and the flat out passion of those years, replaced by steroids and money hungry athletes. Are there players now who remind the reader of the players from that era? Look at Brett Favre. But that's become rare. If PAPER LION was being written today, Plimpton may have had an entirely new perspective. He may have been granted a roster spot because five different players were holding out for "contract reasons". He may have spent his time writing about u

Stray notes on a classic book

Published by Thriftbooks.com User , 17 years ago
This classic book is the story of a "regular guy" who was allowed to try playing professional football (sort of) and lived to tell about it. Some stray notes: (1) He wasn't really a "regular guy." Firstly he was someone who was in a position where he could actually get the opportunity to work out with a pro football team and get into an intra-squad game. And he could REALLY PLAY, a fact that is rarely recognized. It's not that he was exactly on the NFL level -- he wasn't. But, he was good enough that he could sort of play with those guys, which very few of us could, and good enough that the "real" players couldn't tell that he wasn't legit. (They didn't know his real story for a while.) They could tell he wasn't great and they didn't think he was going to stick with the team, but nobody thought he wasn't for real or that his presence was ridiculous. And this despite his being 35 years old, an age at which even most "real" players can't hang in there any more. (2) However, from the book it is clear that there were times that the players regarded his utterances as ridiculous, without there being any indication that Mr. Plimpton realized it. I wonder if he ever did. A good example is some of the things he was prattling about on the bench during the intra-squad game. (3) This book is perhaps the first such intimate portrayal of the life and routine of pro football pre-season camp. A great and classic book. Thank you, Mr. Plimpton, and rest in peace. And by the way you really could play football.
Copyright © 2020 Thriftbooks.com Terms of Use | Privacy Policy | Do Not Sell My Personal Information | Accessibility Statement
ThriftBooks® and the ThriftBooks® logo are registered trademarks of Thrift Books Global, LLC