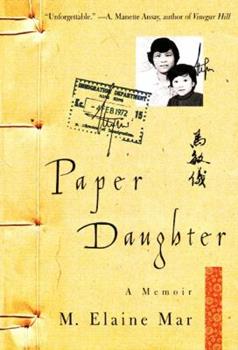 "A moving account of a young woman's struggle to shape her identity and imagine a future she can call her own. Against the odds, M. Elaine Mar emerges whole, and the story she tells is unforgettable." --A. Manette Ansay, author of River Angel and Sister One woman's journey from Hong Kong to Harvard, told through the eyes of an immigrant who exists in two worlds, belongs to neither, and struggles to reconcile her place in both. When she was five years...

Published by Thriftbooks.com User , 18 years ago
The book opens with a sensuous description of a Hong Kong child eating chicken bones, crushing them between her teeth to release the clotted marrow within. The author later contrasts this earthy and primal experience with the manner in which Americans eat fried chicken, delicately nibbling away from the bone, oblivious to the rich marrow within. I found this broad metaphor thought-provoking, contrasting the sterility of American suburban life with the riotous, crowded Hong Kong environs where the author lived her earliest years. I was very impressed with the sensual detail in the book, the descriptions of textures and scents hinting of mystery, such as the jars of dried mushrooms and spices that her mother stored in the tiny room that was the author's first home.The criticism that many reviewers have expressed is that the memoir fails to be reflective. I did not find that to be the case. I prefer to have the author use metaphor and selectiveness of memory to present her view, as she deftly does, than to read pages of exposition detailing why she felt her mother treated her coldly. I believe the author is trusting to the intelligence of the reader to puzzle out the motivations of each character. It would be less than artful to be as obvious as some readers apparently wish.That said, I did not always sympathize with the author, especially as she grew into adolescence and became increasingly disrespectful of her parents. However, it took courage for the author to sometimes portray herself in a less than attractive manner. One was left to wonder if her adolescent angst would have been similar if she had never left Hong Kong.I felt the memoir's legitimate focus was her childhood and formative years. Some have expressed the wish that the author would have continued, describing her college years in greater detail. I disagree, as that would have moved the story away from the focus on family. Family is used to define the author throughout the memoir; as she seperates from her family, the story ends. Therefore, I found the break logical.My one criticism would be that it is slightly facile to believe that a Harvard education somehow has elevated the author beyond her family. The first severing was one of language. Education was secondary. I disliked the implication that the education she strove for somehow delivered her from an intolerable life. The author seemed to be overly impressed with herself for being accepted into Harvard, as if this were the grandest achievement attainable. She also failed to criticize, or if she did, it was too subtle for my tastes, the adolescent mentalities and delusions of genius, which were apparently common amongst the students at the Cornell summer program she attended. Nor could I tell if she felt the psychiatrist who interviewed her for the program was rather pompous and shallow, as I did. My assumption, though, is that the author has chosen to leave this unsaid and that this scene was yet another instance of her trying to

Published by Thriftbooks.com User , 21 years ago
I was truely skeptical about getting this book as I roamed around the book store for something to read on the train but after reading the first chapter, I found myself in tears. Nothing that I've read in the past has truely affected me as the way this book has. Being an American Born Chinese girl made me see the trials and turbulantions one goes through in order to forfill the american dream. It was like a mirror reflection of the relationship with my parents only they understood what I wanted in life and was by my side for it. What was shocking is that she mentioned her father having a glass of hennessey and a smoke during his days after work. Once I read that, I actually was in a gasp because that's what my father still does to this day after a long day of work in a restaurant as well. You will definitely sympathize the pain she has written in the book and you'll never let this book down once you pick it up. And once you're on the final chapter, you'll find yourself flipping through the "acknowledgements" and you'll really know why she's thanking these people in her life. I must say, as a Chinese American reader reading this book, you would definitely need a tissue. Now that I live in another state far away from my parents, this book really made me more aware of what I have, and that is my loving family. This book really reassures you about your roots. Elaine Mar, thank you for writing this book, you have truely gave me the experience of what it's really being a Chinese person in America.

Paper Daughter is a beautiful and nuanced book about family.

Published by Thriftbooks.com User , 22 years ago
Paper Daughter is a rich memoir of cultures crossing, as many reviewers have noted. It is also a valuable addition to the literature of class in America. But I find it has stayed with me most of all as a story about family, and especially about the terrible love that connects so many of us with our parents.Mar's rendering of her early childhood in Hong Kong is beautiful, capturing the satisfaction of a child who feels safe, known, and well-cared-for; she describes her family's meager resources with care and no rancor, making clear that for her, the world was rich and complete. One of my favorite images in a long time is of little Man Yee arriving at school asleep, snuggled up against her mother's back for the walk there. And if there is one moment of plain peace in this novel, it is when Mar, having completed with her mother the arduous and anxious journey from Hong Kong, is reunited with her father at the airport. Nuzzling against him as heart contracted and released. This was my father, and he remembered me."What felt to a little girl like an idyll for her family, one room in a crowded walk-up with uncertain plumbing, was of course not really tenable, and her parents were compelled to make the choices they did. And surely even if Mar's American acculturation had not divided her so painfully from her parents, something else would have. Who among us has not, at some time, looked around at her family, no matter how valued, and felt herself a stranger in a strange land? (After a recent reading from Paper Daughter, Elaine Mar told the audience that she believes that when she and her mother speak Chinese, she understands almost 100 percent of what her mother says, but her mother only understands about 70 percent of what Elaine says. Thinking of myself and my own mother, I thought "yep, that's about right," even though both my mother and I are native English speakers.)Mar's is a classically American story, of upward class mobility and the distance it puts between a young woman and her immigrant parents. But in spite of its honest treatment of an isolation so overpowering it sometimes made her nearly suicidal, Paper Daughter is nevertheless a novel infused with loyalty, love, and humor. Mar's appreciation for detail, and especially for the contours of the heart's many hungers, helps her paint a picture in which every face holds beauty and sorrow.There is no love more intense than the one that ties us to the parents who raise us, and there is no chasm deeper than the one that opens up between those parents and ourselves. We fight with each other desperately, perhaps just to keep from letting go altogether. In Mar's family, poverty, fear, and displacement added intolerable stress to the mix, as they do for too many families. Her parents feel she can never appreciate their sacrifices, and truly it seems that they can't understand her suffering either. Yet from this impasse Elaine Mar has created a book that honors

Enjoyed it tremendously & highly recommend it.

Published by Thriftbooks.com User , 22 years ago
This is a book for everyone.Richly descriptive, bravely revealing, and intensely engaging, M. Elaine Mar's writing has the remarkable effect of bringing the reader right inside her own feelings and senses, as if to experience her story firsthand.Its touching vignettes from a family life so infused with both love and pain; its thoughtful depiction of the experience of a working-poor, first-generation immigrant family in modern U.S. society; and its revealing account of a young girl's struggle for identity in world filled with contradictions, are what make this book worth reading.While I might agree that Ms. Mar doesn't bring everything to a tidy resolution at the end, I'm compelled to point out that this is a memoir, not fiction. Who among us does have everything resolved in life? This book - - as with life - - is more about the journey than the destination.I enjoyed Paper Daughter tremendously, I wholeheartedly recommend it, and I look forward to more from this author.

An Outstanding Achievement for a First-Time Author

Published by Thriftbooks.com User , 23 years ago
M. Elaine Mar's Paper Daughter is an accomplishment. Mar gives a real and sometimes painful depiction of her life growing up as an immigrant to this country. Although often describing the sadness, anger, and other hardships her family faces, she also writes about the truly positive and special times she experiences with family members. I was so moved by her closeness with her father and his unfailing pride in her - even when he outwardly showed other feelings about his daughter. As a close friend of Mar, I gained a great deal of insight into her from reading her story. I highly recommend Paper Daughter, and look forward to reading more from Elaine!
Trustpilot
Copyright © 2022 Thriftbooks.com Terms of Use | Privacy Policy | Do Not Sell or Share My Personal Information | Accessibility Statement
ThriftBooks® and the ThriftBooks® logo are registered trademarks of Thrift Books Global, LLC