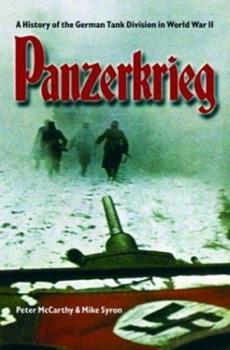 Panzerkrieg: The Rise and Fall of Hitler's Tank Divisions

by Mike Syron and Peter McCarthy

Dispensing with jargon, but including explanatory maps, rare illustrations, and fascinating detail on uniforms, crew members, and the mechanical features of the tanks, the authors give a comprehensive overview of all aspects of this deadly fighting force, both human and technical.

Published by Thriftbooks.com User , 15 years ago
This is one of the best tank books i have read in a long time. If you have any interest in tanks this book is a must buy.

Published by Thriftbooks.com User , 16 years ago
I loved this book. It gives so many details of how the German armies were run during WWII. Not only were the German infantry forces far superior than any other force during WWII but the German panzer forces changed the face of war forever. It gives a great military overview of how battles and tank research changed the tide of war. Very revealing about how Hitler was such a poor military leader and Hitlers men were really what made him so powerful. A great read, has nothing to do with fascism or Hitlers ideas, simply military based.

Published by Thriftbooks.com User , 18 years ago
This is the first book, I believe, by two young writers who have chosen to study Germany's armored forces in World War II. The book covers the Panzer forces from their inception in the early thirties right through the end of the war, covering all of the battles that they fought in. If that were all that was in the book, it would be a worthwhile work, but that's just the start of things.The authors are determined to explain every aspect of armored warfare in WW2 that they can. As a result, they discuss everything to do with it, from the design of the tanks themselves to their features and the duties of the crewmen. Such issues as disposing of bodily waste while inside the tank (I'm not kidding) are at least discussed. Each German tank is discussed in some detail, with such things as armament, armor, and horsepower detailed so that you know the weak and strong points of each vehicle.The author also spends a considerable length of time talking about the various officers in the Panzers and their careers. Their hero is Heinz Guderian, the man who devised the Panzer forces and influenced their development the most. They also have a great deal of respect for Rommel and Manstein, and spend a lot of time on Balck, Hube, von Mellenthin, Model, von Rundstedt, and von Manteuffel. They also discuss at some length several more junior officers who they think are worthy of praise.There are a few minor errors in the book, nothing to detract from the information, but a bit troubling nontheless. In the first chapter there's a reference to the "Roman Phalanx," and later George Patton is referred to as a "redneck." Romans, of course, had the Legion, which they used to make the Phalanxes of the Greeks obsolete, and Patton was anything but a redneck, even if he was a loudmouth. The result is a very good book with much interesting and useful information. I would recommend it to anyone with an interest in World War II in Europe, or armored forces and their employment.

Great Book About The History Of The German Armored Divisions

Published by Thriftbooks.com User , 19 years ago
This is a great book about the history of the German panzer divisions from it's creation under Guderian to the end of the second world war and after.I also think that it's a great reference to the many tanks(including that Panther, Tiger, and King Tiger tanks) and self-propelled guns that that was available to the Wehrmacht.This book is a must for any fans of history or any fans of tanks, its history and its tactics.

The full story of the panzer divisions

Published by Thriftbooks.com User , 20 years ago
This is THE book for anyone who wants to learn all about Nazi Germany's mighty panzers. Panzerkrieg is the only book I know of that covers the whole story from the tank's debut in WWI to Germany's final collapse in May 1945 and it manages to do so in an extremely readable way. Along with a fast paced narrative which keeps you turning the pages, the book features a good selection of pictures and uncluttered maps of the major battles.Even though I'm a WWII fan, I hadn't realised how significant the panzers really were until I read this book. It puts their achievements into true perspective. They were at the forefront of every German battle and campaign of the war from the invasion of France to the Battle of the Bulge and in the final analysis were only defeated by airpower and the sheer weight of material the Allies brought to bear. And of course Hitler's bungling played a major part in the Panzerwaffe's destruction. The reader is left wondering what they could have achieved without his interference.McCarthy and Syron have really brought this epic to life along with the amazing men and machines who made up the Panzerwaffe. The real star of the book is Heinz Guderian, the charismatic general acknowledged as the father of the Panzerwaffe, but generals Rommel and Manstein also play prominent parts in the story. As far as the tanks go, I'm still having nightmares about the mighty King Tiger, an armoured behemoth which could hold its own even on today's battlefields.Whether shivering on the Steppes or sweltering in the North African desert, the German tankmen always gave it their best shot. This book is a worthy record of their victories and defeats and I recommend it to anyone who wants to know more about their story, regardless of whether you're a student of military history or a general reader.
Trustpilot
Copyright © 2022 Thriftbooks.com Terms of Use | Privacy Policy | Do Not Sell or Share My Personal Information | Accessibility Statement
ThriftBooks® and the ThriftBooks® logo are registered trademarks of Thrift Books Global, LLC