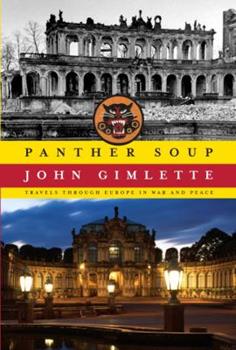 Panther Soup: Travels Through Europe in War and Peace

In 2004, John Gimlette set off across Europe, following in the footsteps of one of the greatest armies ever assembled: the United States forces of 194445. His guide (emotionally if not geographically) was Putnam Flint, an eighty-six-year-old Bostonian who had landed in Marseille in the midst of World War II with his tank destroyer battalion, nicknamed The Panthers. With Flint's help, Gimlette traveled back through the war to try to grasp the physical,...

Published by Thriftbooks.com User , 13 years ago
A journey that combines travelogue, history, and cultural study. It follows the return of war-veteran Putnam Flint whose WW2 experience involves a less known campaign in Europe. It takes the reader on the path he followed after landing in Marseilles in October, 1944 through to Austria and the close of the war. The author accompanied Flint and his grandson, Jeff documenting the journey and adding rich history, geography, and cultural analysis on this return to the battlefields of Europe. It is like five books in one and all of them interesting alone and in the aggregate. It has the potential to spawn an entirely new genre - imagine a Vietnam veteran's personal odyssey through Hue and Saigon. What made the book so special is the time that has passed for context and perspective, the honesty and subtle reflections of Flint, the innocence and wonder of the grandson, and the incredible insights and writing of Gimlette.

A lively adventure off the beaten path

Published by Thriftbooks.com User , 13 years ago
"Panther Soup" is not a history book. It is author John Gimlette's description of his adventure with Putnam Flint, a taciturn American veteran, as they retrace Flint's World War II armoured advance through Europe--not from west to east but from south to north. Gimlette, like an errant and inquisitive child, finds innumerable distractions along the way, and his descriptions of the people, places, food, events, weather, fortifications, ruins, mountains and history are full of lively and often excruciatingly accurate details. The reader can imagine "rich farmland, a brilliant brocade of cabbage and mustard"; "a staircase made of books and a ladder to the loft"; "an area that looked like the Serengeti for pigs, the horizon heavy with pork"; and a town that "was in a perpetual state of Christmas . . . .Everything was made of pine or chocolate, or inhabited by furry animals and puppets". Gimlette listens while Flint remembers Paris as it was in 1944: "The city, he said, had been black with grime, the fountains didn't work, and there was no coal or heating during one of the coldest winters ever. The Parisians themselves had looked raw from washing in icy water, and clacked around in wooden shoes because there was no longer any leather. Girls wore their skirts short, not because it was fashinable but because it was all they could afford." Such heartbreaking images are difficult to imagine and impossible to forget. History and its horrors resurface at every turn, and Flint's second journey is not the same as his first. Flint passes through now-unrecognizable villages and mountains, in a vehicle very different from the Hellcats of the war. The reader feels what he must have felt as a young man and now again as a traveler: Where are we? Is this France? Austria? Germany? A principality? How can I tell? In an instant a memory clicks into place and he recalls a bell in a little church spire, a steep ridge dropping off into nothing, the smells of barns and cooking smoke. He remembers, though his family tells the author he tried all his life to forget. As Flint's grandson Jeff drives them through the Vosges Mountains in Alsace, "the shadows seemed even deeper than before, with the clouds lapping into the forest. As our car climbed through ever darker shrouds of sycamore and ash, a collective gloom seemed to seep amongst us. Flint shuddered, as much from the cold as recollection." They were approaching the site of "the only concentration camp ever built in mainland France". In 2005, Gimlette returns to Flint's route and sees the riverbank where Flint's unit entered Germany: "I found myself on a little beach of gritty sand and nettles. It may not have looked like a D-Day bridgehead, but this was where the first American armour had landed on the eastern banks of the Neckar." To Gimlette and the reader, this unremarkable crossing is indeed worth recording. The sacrifice, confusion, fear and deceptive triumph of victory in Europe are magni

The War that had to be Fought

Published by Thriftbooks.com User , 14 years ago
World War II was the war that had to be fought. While Korea, Vietnam and now Iraq always had their doubters, the consensus of Americans and particularly of those who fought and sometimes died in the horrific battles of World War II, was that opposing the Nazis and the Japanese was the right thing to do. Putnam Flint was a platoon commander in the 824th Tank Destroyer Battalion, better known as "The Panthers", which first landed in Marseilles in mid-1944, was bloodied in the hard fought battles in the Vosges region of Alsace and Lorraine, crossed the Rhine into Germany and then near the end of the war, dashed into the Austrian Tyrol helping to capture the future Olympic Winter Games site of Innsbruck. At age 86, Putnam Flint, who had never revisited the countries he had known while under fire as a soldier, was coaxed into returning by the renowned travel writer and author, John Gimlette, a British barrister who had the good fortune to meet Putnam at a dinner in London. As Putnam and John accompanied by Putnam's grandson, Jeff, traversed the invasion route of the US Seventh Army, Putnam shares his thoughts of what it was like to be a combat soldier, his hopes and fears, but mostly about the camaraderie of his men and the sense of duty of a job that had to be done. He recreates the everyday drudgery of army life as he and his fellow combatants slogged through the mud, endured biting cold and lived with the terrible smell of death. I have read hundreds, if not thousands of books about war, the Holocaust and other horrific events, and seen hundreds of films depicting the same. Yet, no matter how many books I read, nor movies I see, no matter how realistic they seem, I think it is the smell of a battlefield or of a destroyed town, village or concentration camp, its blood, feces and bloated corpses of both men and beasts that one cannot really know unless you were there. However, this book does its best to make us imagine what hopefully most us have never (myself happily included), nor wish to ever experience for ourselves. John Gimlette supplements Putnam's recollections with quotes from his battalion's combat records along with interviews and conversations of the local French, German and Austrian inhabitants, including former German soldiers whom they encounter along the way, to inform us of what happened in 1944-45 and how they remember that time in the present day. Along the way, much colorful local history is added into the mix by John and while not all of it would appear to bear on the main theme, the anecdotes are wonderful nuggets of information and nearly all of them are greatly entertaining, whether they concern organized crime in Marseilles or the history of Shakespeare and Company bookstore and literary salon in Paris. After all, while World War II is the main focus, this is also a travel book and John's observations on the history, as well as present day life in these places make them come alive and make me want to visit many of

Tracks in the mud through the mists of time

Published by Thriftbooks.com User , 14 years ago
Fans of John Gimlette will be delighted with his most recent book, Panther Soup: Travels Through Europe in War and Peace. Gimlette is a graceful writer who writes realistic travel books based on the details of his own experiences. In At the Tomb of the Inflatable Pig: Travels Through Paraguay, he found himself in Paraguay during the Falklands War; as a Brit in Argentina he decided to cross the border and the result was a study of a country few readers know much about. He inherited a large number of materials from his grandfather who had been a medical missionary in Canada; the result of tracing his grandfather's steps was Theatre of Fish: Travels Through Newfoundland and Labrador. In Panther Soup -- the title is taken from the name of the muddy roads created by trucks and tanks during World War II -- Gimlette follows the path of US veteran Putnam Flint who was part of the American invasion of Europe in 1944 and 1945. Gimlette met Flint during a dinner and after considerable effort was able to convince Flint to return to Europe for the first time since his return to Boston from the war 60 years earlier. The two journey with Putnam's grandson Jeff from Marseilles to Austria following the path of Flint's 824th Panther Tank Busters unit. The book reconstructs Flint's experiences and and records Flint's modern reactions: "Sergeant Parham was the only one who'd ever known enemy fire (Panama '38), but it was not an experience he could humanely explain. `I shot one right though his left ear,' he'd say, `and it came out of his right.' The only other professional was Major Clint Smith, the battalion commander. He was a tall fleshless man from somewhere south-west, all chickenshit and razor-sharp dress trousers. Everyone else felt much like Flint, overawed and out of place. The 824th were always an odd mix. Amongst almost 800 uprooted souls there were Cubans, Baptists, truckers, dockers, hucksters, accountants, cops, cheats, hunters, conscientious objectors (serving as medics), asthmatics, several athletes, countless adulterers, a couple known as `The Rover Boys' and a Chinaman called Jung Chin. It was like a village in the ether, a community only in concept." As in his earlier books, Gilmette records his own reactions to the sights they encounter: "Then I'm at the top, alone on an empty battlefield. It's like a landscape inside out, a great belly of eviscerated earth and rock. All around is the wreckage of an Armageddon, a vast fungal fortress system of shattered domes and concrete mushrooms, pillboxes, foxholes, giant gun emplacements, crumbling redans, rangefinders, embrasures and trenches ten feet deep. I find tiny, cement cells in the earth, like weird earth-borne fruits that have ripened and burst and turned to stone. Nothing has been spared the cataclysm. It's now a world of components and pieces; lumps of roadblock, bedsprings, a glittering carpet of glass, and fuel cans scattered like chaff. Obstinate chimneys nose their way up through the ru
Trustpilot
Copyright © 2022 Thriftbooks.com Terms of Use | Privacy Policy | Do Not Sell or Share My Personal Information | Accessibility Statement
ThriftBooks® and the ThriftBooks® logo are registered trademarks of Thrift Books Global, LLC