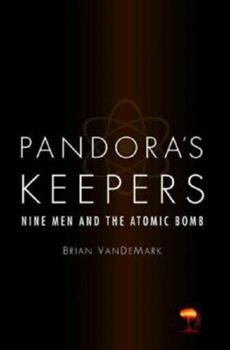 They Were Nine Brilliant Men who believed in science and who saw before anyone else the awesome workings of an invisible world. They came from many places, some fleeing Nazism in Europe, others... This description may be from another edition of this product.

New angle to a revered tale..

Published by Thriftbooks.com User , 12 years ago
How to write another book on the development of the A bomb, the Manhattan Project, Los Alamos? VanDeMark decides to intertwine nine men, and focus on their relationship, trials and tribulations during those crucial months. There is too much political debate on the implications of the development and usage of the bomb, and too little technicalities, for my taste. And the decision to include Bohr is questionable, when many others should rank ahead of him. While Bohr is a giant in atomic theory, he was well past his prime by this stage and was (even according to the book) mainly concerned with the consequences of having this weapon. Many were surprised to even see 'Nicholas Baker' at Los Alamos, and Oppenheimer said of him, "Bohr at Los Alamos was marvelous; he took a very lively interest...but his real function was not technical."[1]Some of the younger scientists did not even realize that Bohr was still alive.[1] Bohr himself admitted that "They did not need me to make the atomic bomb."[1] Einstein, by his letter to FDR alone would have ranked above him, and other less than household names should have. Frisch or Peierls, who started the ball rolling by confirming theoretically that a neutron chain reaction could be maintained are deserving; Seaborg, the plutonium expert; Neddemayer, who figured out how to detonate the plutonium (Pu detonates much faster than U, so the gun approach used on the uranium bomb, was too slow), and designed the implosion by shock wave method, which led to a spherical 'gadget', hence the Fat Man. And if non-physicist can be included, then without doubt, General Groves, or FDR himself, who placed the necessary stamp on the whole thing in the dark days of 1941-42. [1] Rhodes,R. The Making of the Atomic bomb

Fascinating insight into the personal side of atomic physicists

Published by Thriftbooks.com User , 14 years ago
This is an important story about the people who played key roles in the development of nuclear weapons. The interplay of intellectual challenge, moral reluctance, and fear of the enemy is examined in detail for numerous key players. The politics of weapons development is intertwined.

The Pride and Shame of 9 Men

Published by Thriftbooks.com User , 16 years ago
Even if you've read many of the A-bomb books (as I have), you'll find a new angle here. That angle involves the personalities of 9 of the physicists who were swept from their idyllic careers of research and teaching to create the atomic bomb. Virtually everyone of them lives to regret their participation in the Manhattan Project, with the notable exception of Edward Teller. Teller, of course, goes on to develop the H-bomb in the early 1950's and is despised by most of his former atomic bomb colleagues. Oppenheimer, Fermi, Bethe, Bohr, Teller, Lawrence, Compton, Rabi, Szillard. By book's end these will be more than names and faces; these 9 very different, very complicated men came together for a couple of short years and were forever linked. In 1943 they thought they were saving the world. By 1946 most were afraid they may have destroyed it. VanDeMark has done a marvelous job of fitting 9 biographies into a very readable, not overly long book.
Trustpilot
Copyright © 2022 Thriftbooks.com Terms of Use | Privacy Policy | Do Not Sell or Share My Personal Information | Accessibility Statement
ThriftBooks® and the ThriftBooks® logo are registered trademarks of Thrift Books Global, LLC